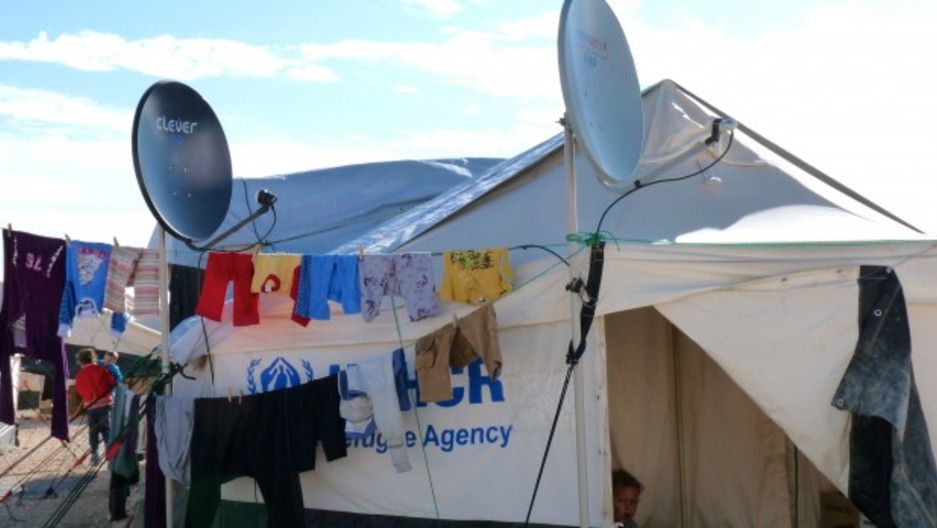 Most of Zaatari camp's 44,000 residents live in tents. A few of them even have some access to electricity and satellite TV. (Photo: Nader Salman)

As the civil war intensifies in Syria, more refugees are trying to escape the conflict. Some have crossed into Turkey. Others have gone to Lebanon. The biggest refugee camp for Syrian refugees is in the neighboring Kingdom of Jordan. But as The World's Matthew Bell reports not all refugees are allowed in.

Syria could be headed in the same direction as Somalia, a failed state where chaos and warlords have reigned for years. This dire warning came on Sunday from international envoy to Syria, Lakhdar Brahimi. He said things are getting worse in Syria. And if something isn't done to stop it, the violence could claim more than 100,000 lives in the next year.

Meanwhile, the conflict is producing large numbers of refugees. About 250,000 people from Syria have crossed the border into Jordan to seek refuge. Many of them begin their new lives-in-exile here, at the Zaatari refugee camp. It's near Jordan's northern border with Syria.

Eleven-year-old Yasmine spoke with me in a chilly warehouse, temporary shelter for new arrivals. She said she escaped Damascus with her father and one brother. Two of her brothers stayed behind with their mother, she said, to take care of their grandmother who's old and sick.

A 30 year-old teacher from the Syrian city of Dera'a also just arrived in the camp. She left Syria with her husband and some neighbors. It took them nearly 24 hours of walking and driving to get to the border. And they were terrified of being gunned down on the way.

“It's a terrible feeling, leaving behind your home, your land, your job, everything,” she said. “But we thank God for arriving here in the camp where there's security. And we also thank the government of Jordan.”

Zaatari camp is home to about 44-thousand people from Syria. Most live in tents. They get access to water, food and medical care from aid groups and donations. A Jordanian government charity runs the camp. On the day I visited, nearly 700 people arrived.

But not all refugees are welcome here. Displaced Palestinians from Syria not taken in at the Zaatari camp.

Speaking with me in an immaculately clean tent over coffee and endless cigarettes, a 23 year-old construction worker would only give his name as Mohamed. He said he left the Yarmouk refugee camp in Damascus, where many Palestinians live, about two months ago. The place was getting violent and food was hard to find, he said.

The young man explained that his mother is Syrian. His father is Palestinian. Mohamed said the Jordanians are turning people back at the border if they have ID cards that say they're Palestinian. Lucky for him, he has a Syrian ID.

Mohamed's uncle, he said is a Palestinian from Damascus who has been turned away at the Jordan border five times.

When Palestinians from Syria are able to cross the border into Jordan, they are usually sent to a separate camp, called Cyber City.

This camp is really a run-down six-story dormitory. It's in an industrial zone outside the city of Ramtha, next to the Syrian border. And it's where I met 55-year-old Ahmed Ibrahim Daloul. He got out of the Syrian capital with his wife and their five kids about six weeks ago.

With his four-year-old son in his lap, Daloul said he's happy to be in Jordan, away from the fighting in Syria. But he says it's also frustrating. Daloul is registered as a Palestinian refugee, even though he was born in Syria. So are his kids. But his wife is Syrian. Now, she's staying with relatives elsewhere in Jordan, while Daloul and the children live in this single room. They are not allowed to leave the camp for any length of time, he said. And his wife cannot move in with them permanently.

“It's a difficult situation,” he said.

And not only for his family. Jordan is wary of large numbers of Palestinians re-settling in the kingdom. That is due in part to leftover bitterness from the bloody conflict between Palestinian militants and the Jordanian government more 40 years ago.

Jordan's treatment of these new Palestinian refugees from Syria is about politics in Jordan, where more than half the population is made up of Jordanians of Palestinian descent.

“The Jordanian – Palestinian relations have improved tremendously over the past years, but there still remains worry, suspicion,” said Daoud Kuttab, an Amman-based journalist. “As a result, most officials in Jordan are very careful about any demographic changes that can tip the balance between East Bank Jordanians and Jordanians of Palestinian origin.”

About 500,000 Palestinians live in Syria. Since the start of the uprising there, about two thousand of them have managed to cross into Jordan. By contrast, more than 10,000 have gone to Lebanon. But these days, it's very difficult for any Palestinian refugees to get into Jordan.