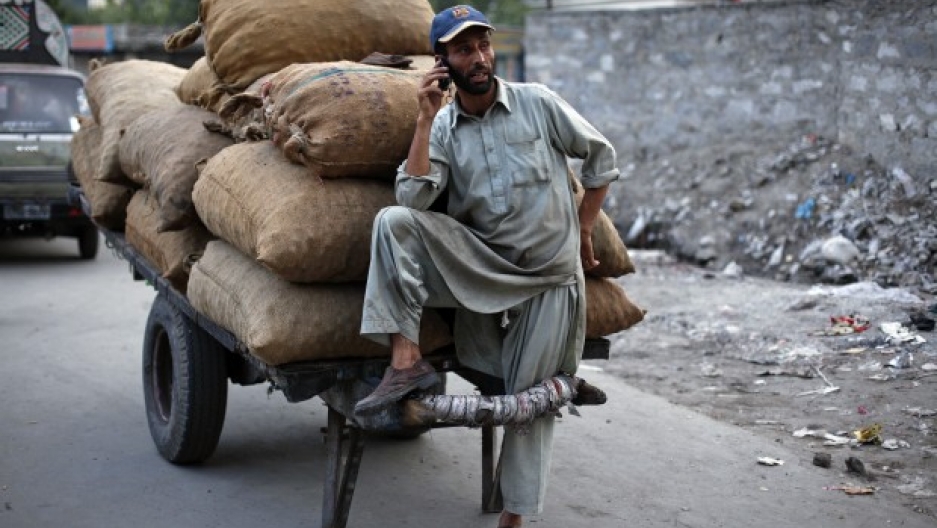 Share
New Year's eve is more low key this year for many in Pakistan. In a place where millions use small motorbikes for transportation, the country has banned carrying passengers, riding without a muffler, and popping wheelies. But those are just the prohibitions for tonight. The Pakistani government has gone 'ban-crazy' recently, in the name of national security. Especially egregious, say critics, has been the occasional ban on cell phone use, which they've done several times over the past year. The first time the government imposed a cell phone ban was in March. It happened again in August. Rehman Malik, Pakistan's interior minister, was matter-of-fact about it when he was announcing the seventh cell phone ban of the year in November. "I had no option," Malik said, "but to shut down mobile phone services in Karachi and Quetta from one o clock until late in the evening." That was during Muharram, a religious commemoration for Shia Muslims. In Pakistan that has become a time of violent sectarian attacks. The ban lasted during daylight hours for three days. It was imposed on more than 40 cities and towns. Malik said cell phones are an intricate part of terrorist attacks. "One, they use them to detonate bombs" said Malik. "Two, the terrorists communicate among themselves with them. And three, they communicate with the masterminds behind the attacks using mobile phones." But its not just mobile phones that are prohibited. There has also been a ban on the use of motorcycles, because terrorists have used them. In addition, the government banned YouTube — all of it – for three months after the release of the "Innocence of Muslims" video. The anti-Islam video sparked protests across the Muslim world, including in Pakistan. Twitter and Facebook have also been banned at different times in previous years. And in 2011, the government attempted to ban a list of 1,700 phrases from text messages, it deemed vulgar. Phrases like 'barf face' and 'cyber slimer.' Furhan Hussain, who works for Bytes For All, a digital- rights organization that has recently started a new campaign to challenge online censorship, said the bans are having an impact. "You have to see that the need to communicate becomes even more stronger in a society that has faced severe dictatorships over the past few decades," said Hussain. "By blocking channels of communication for civilians, the democratic process becomes even more difficult to establish. In a way, its a way of sabotaging the entire system." Hussain said that although the right to information and expression are protected in Pakistan's constitution, the legal language is ambiguous enough to be exploited. "These words are very loosely constructed, explained Hussain. "They can be interpreted, and reinterpreted, and misinterpreted ad nauseam. And that is what the government does as well" Dr. Nishat Fatima is a gynecologist and the wife of an opposition political leader. She is taking the government to court for violating her constitutional rights by banning mobile phone services. Fatima had a patient who was pregnant. The patient wanted to call Fatima when she wasn't feeling well, but couldn't because of a cell phone ban. "When I checked I found that the fetus had died three days earlier," said Fatima. "Maybe, if the phone network was working at the time then I could have sent her to the hospital and treated her, and she would have been a mother now." Fatima says there's got to be a limit to what can be banned for the sake of security. "Why don't you just put a ban on everything?," Fatima asked. "Don't allow TVs as it could be that someone uses a TV remote to detonate a bomb? Don't allow cars to run. Shut down everything. Stop people from breathing. Are the lives of the public so cheap?" Fatima and others says these bans aren't just about security, but are about reinforcing the idea that the government has the right to control people's lives.