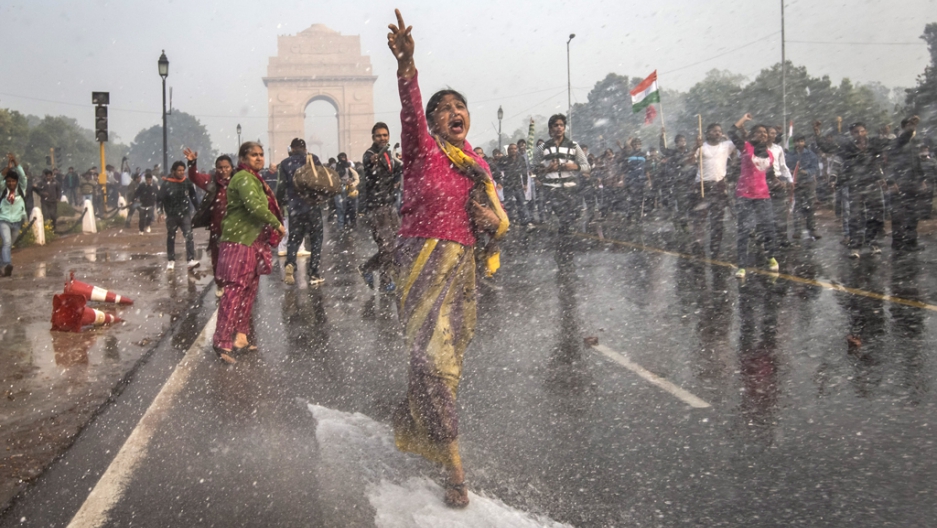 A protestors chants slogans as she braces herself against the spray fired from Police water canons during a protest against the Indian governments reaction to recent rape incidents in India, in front of India Gate on December 23, 2012 in New Delhi, India. The gang rape of a 23-year-old paramedical student in a moving bus on December 16, in Delhi, has led to people to react openly against the governments current rape laws. Over a thousand protesters gathered in front of Delhi to protest against lax laws and the governments handling of recent rape cases all over India.
Credit: Daniel Berehulak
Share

NEW DELHI — Protesters returned to the streets Saturday, as India woke to the news that the victim of a vicious gang rape that ignited a nationwide debate on violence against women had died overnight.

At New Delhi's Jantar Mantar area, an estimated crowd of 500 or more demonstrators gathered, observing a few moments of silence for the 23-year-old victim before raising chants and shouting slogans. Protesters also took to the streets in Bangalore, Kolkata and Mumbai. And Indian television stations ran near-constant commentary on the protests and tapped legal experts, politicians and activists for studio debates on violence against women.

Protests continued throughout the day, with candlelight vigils stretching into the night on Saturday.

“We want...justice! We want...justice,” a section of the crowd at Jantar Mantar shouted, exhorted by a leader with a microphone. Others wore black ribbons over their lips in a futile effort to adhere to an earlier plea for a “silent protest.” And still others marched up and down New Delhi's famous protest block, shouting in Hindi, “Phansi do!” (Hang them!).

“Firstly, they should hang these people,” said Anju Gupta, a Delhi University professor taking part in the protests. “Just to show that hence, from now on, the punishment will be very severe for rapists.”

“The first day I came here, it was all about 'How can something like this happen in my city?' How can a bus roam around for more than an hour and no one notice that [a gang rape is being committed on board],” said 26-year-old Pallavi, a market researcher who has been part of the Delhi protests for the past eight days.

“But as the movement proceeded, I realized it is more about creating awareness amongst people of how there should be equality between the genders, first of all. And apart from that, we have to make sure that at every house there is no kind of inequality or mistreatment.”

“We have to educate our sons, our brothers, and all the males in our families, to respect every woman outside and if they see anyone mistreating any woman outside, they should stand for her,” Pallavi said.

The 23-year-old gang rape victim died early Saturday after being transported to Singapore for treatment. Raped and savaged by six attackers who offered her and a male friend a ride home in a private bus on Dec. 16, the young physical therapy student was beaten and impaled with an iron rod for nearly an hour as the curtained bus floated through the city.

"The patient passed away peacefully at 4:45 am on 29 Dec. 2012," a statement from Mount Elizabeth Hospital said, according to BBC News, adding that the 23-year-old's family was by her side. The woman had arrived in Singapore on Thursday after undergoing three operations in a Delhi hospital.

Indian Prime Minister Manmohan Singh was quick to issue a brief statement of condolence. And the Delhi Police swift in posting barricades to block access to the symbolically important India Gate monument and other locations that were the site of violent protests in the immediate aftermath of the rape itself. A total of 40 companies including 28 companies of Central Reserve Police Force (CRPF) were deployed in Delhi, according to reports.

“I join the nation in conveying to her family and friends my deepest condolences at this terrible loss,” Singh said in a statement issued by the Press Information Bureau. “I want to tell them and the nation that while she may have lost her battle for life, it is up to us all to ensure that her death will not have been in vain.”

"As a woman and mother, I understand how you feel. I appeal you to remain calm and help strengthen our collective resolve to fight the menace of violence against women," Congress Party President Sonia Gandhi, who is also chairperson of Singh's United Progressive Alliance coalition, said in a televised address, according to the Hindustan Times.

But neither expressions of sympathy nor the blocking of roads and shuttering of Delhi Metro stations was enough to keep protesters off the streets altogether. And the police barricades seemed to undermine any palliative effect that the statement from the prime minister, or subsequent speeches by Congress Party President Sonia Gandhi and Delhi Chief Minister Sheila Dikshit, might have had.

“You have 10 Metro Stations closed. Almost every bus has been stopped. There is almost no way to come. Police is more, media is more, people is less,” said a protester named Sandeep, who started a Facebook group called Citizens Against Rape following the incident.

“Why in a democratic country, why in India, where we have democracy, are people not allowed to protest?” said Puja Srivastav, another protester.

“There were police reforms which were set in 2006 [by the Supreme Court] and never implemented. There are laws which are there, which have never been implemented, again. So what is the government doing here?” said Pallavi. “They're just passing things and never making sure they are implemented.”

“[My protest] is against the political establishment, the police establishment and the medical establishment,” said 62-year-old Paramjit Singh, a medical doctor who formerly worked at government-run hospitals, including the famed All India Institute of Medical Sciences (AIIMS).

“If you ask a third year medical student, would you shift a patient in such condition to another country for treatment, if that student were to say yes they would not clear him in the exams. Now, all our professors were made to be in agreement with the political opinion that the girl has to be sent [to Singapore]. If the rapists have maimed her body, then the political establishment has indulged in cold blooded murder.”

Protesters waved black flags and surrounded the Delhi chief minister when she visited Jantar Mantar in the afternoon, forcing her security personnel to escort her out of harm's way before she could address the crowd. Interviews with various demonstrators, as well as the feverish posts from Indian users of Twitter and other social networking sites, suggest that disgust over the failure to curb violence against women is dovetailing with already simmering anger over corruption and the near collapse of government services across the board.

“I was part of the anti-corruption protests as well,” said Akash, a 19-year-old Delhi University student, referring to a protest movement that brought tens of thousands of Indians onto the streets last year.

“We elected these people and sent them to parliament. It's their job to draft the bill, to finalize the bill, to have a debate on that. Since they're not actually turning up and doing their jobs, we have to get out on the streets.”

The government dispatched a special aircraft to Singapore to repatriate the victim's body on Saturday. And police immediately announced that they will now charge the six alleged attackers who they have in custody with murder, as well as rape, and exhort prosecutors to seek the death penalty.

But while that may quiet the chorus of “Phansi do,” it won't reduce young India's disgust, which goes beyond this government, or the Delhi police, to encompass every facet of the political establishment.