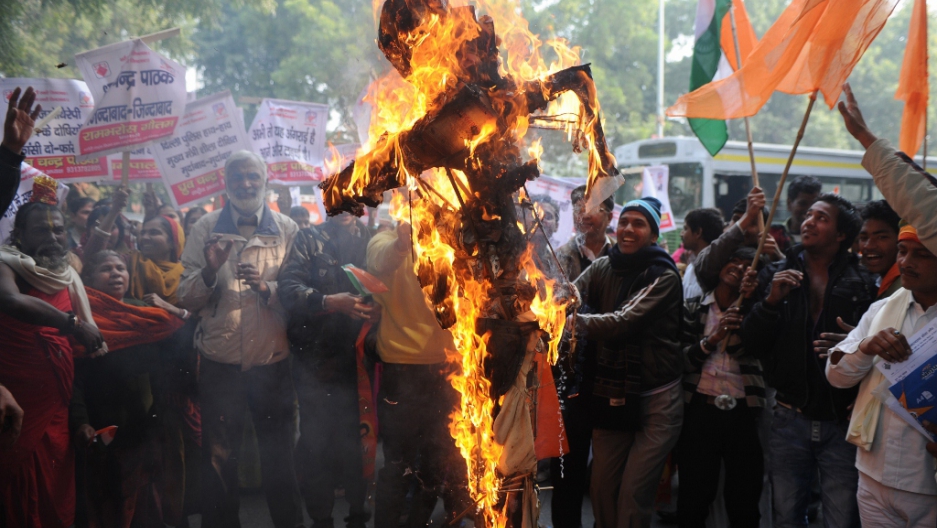 Protesters have already begun to gather at New Delhi's Jantar Mantar on Saturday morning, as the city wakes to the news that the victim of a brutal gang rape died in a Singapore hospital overnight.

Anger is again mounting at the government and city authorities, following an announcment by the Delhi police that barricades will block access to the center of the city, where protesters previously marched on the house of the president and the symbolic India Gate monument. And right-leaning commentators have renewed blasting the government's decision to fly the victim to Singapore, reportedly against her Indian physicians' advice, as an attempt to avoid being blamed for her eventual demise.

"The patient passed away peacefully at 4:45 am on 29 Dec. 2012," a statement from Mount Elizabeth Hospital said, according to BBC News. The 23-year-old's family had been by her side, it added.

The woman arrived in Singapore on Thursday, having already undergone three operations in a hospital in Delhi.

"The patient had remained in an extremely critical condition since admission to Mount Elizabeth Hospital," a statement from hospital chief executive Kelvin Loh said, according to the BBC.

“I am deeply saddened to learn that the unfortunate victim of the brutal assault that took place on December 16 in New Delhi has succumbed to the grievous injuries she suffered following that attack," Prime Minister Manmohan Singh said in a statement issued early Saturday morning.

"I join the nation in conveying to her family and friends my deepest condolences at this terrible loss. I want to tell them and the nation that while she may have lost her battle for life, it is up to us all to ensure that her death will not have been in vain."

Singh also issued a veiled plea to protesters to stay off the streets.

"The need of the hour is a dispassionate debate and inquiry into the critical changes that are required in societal attitudes," Singh said. "Government is examining, on priority basis, the penal provisions that exist for such crimes and measures to enhance the safety and security of women."

That call is likely to go unheeded today, though it remains to be seen what form the demonstrations will take. Previously, peaceful protests were transformed into a violent altercation with police, after youth activists from various political parties "hijacked" the demonstrations, according to various sources. Many protesters resented the involvement of political parties -- all of which continue to field candidates accused of crimes against women, as GlobalPost reported earlier.

"Mahatma Gandhiji also protested against British and now after freedom I cannot protest in my own country :(," a twitter user who goes by the handle Internet Hindu tweeted early Saturday.

"The only way is to shut the entire country down. One city, one day won’t work. Stop all work till we swear to make every woman feel safe," Bombay Addict added.

"Not the ideal beginning to a weekend. She lost the battle, removed from her own country by an insensitive govt, busy playing politics," posted Twitanic.