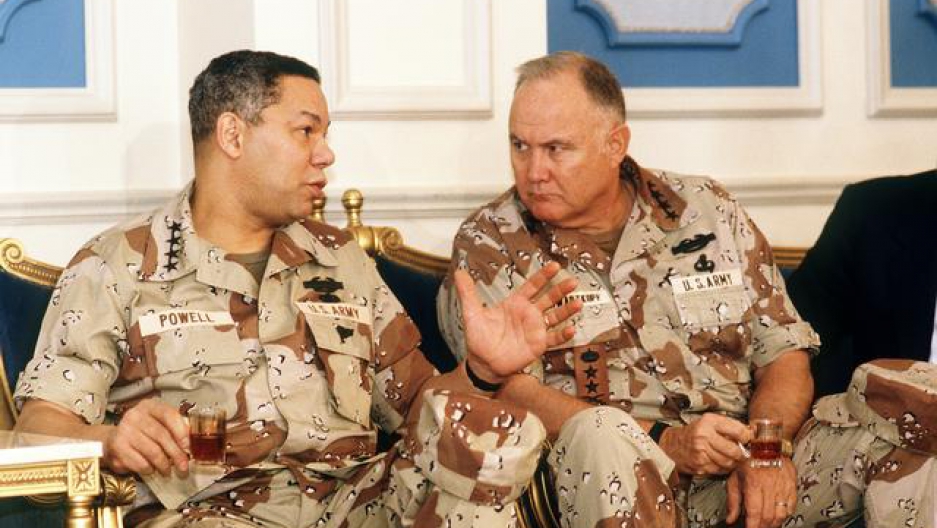 Gen. Schwarzkopf, right, was known for his disagreement with superiors Dick Cheney, then the secretary of defense, and Gen. Colin Powell, chairman of the joint chiefs of staff. (Photo by GrummelJS via Wikimedia Commons.)

Gen. Norman Schwarzkopf, the son of a general who served in both world wars, transformed what it meant to be an American military leader — inviting reporters into the battlefield during the first Persian Gulf War and conducting live, televised briefings about operations.

But the general, who died Thursday at age 78, also believed that it was his obligation and, indeed, the obligation of every high-ranking Army officer to challenge the system and the decision-makers he reported to.

Schwarzkopf was born in New Jersey and graduated from the U.S. Military Academy at West Point in 1956. Peter Petre, co-author of Schwarzkopf’s memoir “It Doesn’t Take A Hero,” says toward the end of the general’s career, both Democrats and Republicans urged him to run for public office.

“But Norm always saw himself as a soldier and not a politician,” Petre said.

Air Force Col. Sam Gardiner (Ret.), says Schwarzkopf learned from the mistakens of Vietnam and decided the press could be his friend and rather than the enemy.

“(Schwarzkopf) set the stage for what we have seen in the U.S. military leaders since then. All the way up through where we are now in Afghanistan,” he said.

In his memoir, Petre recalled, Schwarzkopf wanted to lay everything out in an honest and brutal way.

“The story of his work in the military is very much a story of his generation, which was young officers who saw the Army hit its nadir during Vietnam (and) thought about quitting after Vietnam,” he said. “When they decided to stay, their mission was to try to fix it and try to restore honor to the military.”

But when Schwarzkopf became commander of the U.S. Central Command, which dealt with the Middle East, Petre said the decision surprised a lot of people.

"When he took that command it was a backwater, it was actually headquartered in Tampa and nowhere near the Middle East which was its region,” he said. “But he thought that of all the open commands, history was most likely to happen in the Middle East. And the way he straddled it was he came to the job with deep knowledge of the Middle East because he had been there as a teenage kid when his father, as a general, was posted there."

The first Gulf War overcame the military’s belief in itself, Gardiner said. And Schwarzkopf’s generation set the stage for easier decision making by politicians about where to commit the American military.

“It reinvigorated the fact that they could quickly achieve missions with high technology where they dominated the enemy. That was an important change from the 20-year period after Vietnam,” he said.

But during the second Iraq war, Petre said, Schwarzkopf publicly expressed concern about inadequate planning before the war began.

“What (Schwarzkopf) was intensely aware of was that Iraq was an amalgam of different sects and different tribal groups. He was very sensitive to cultural implications of invading a country and he felt that that hadn't been taken into account (the second time),” he said.