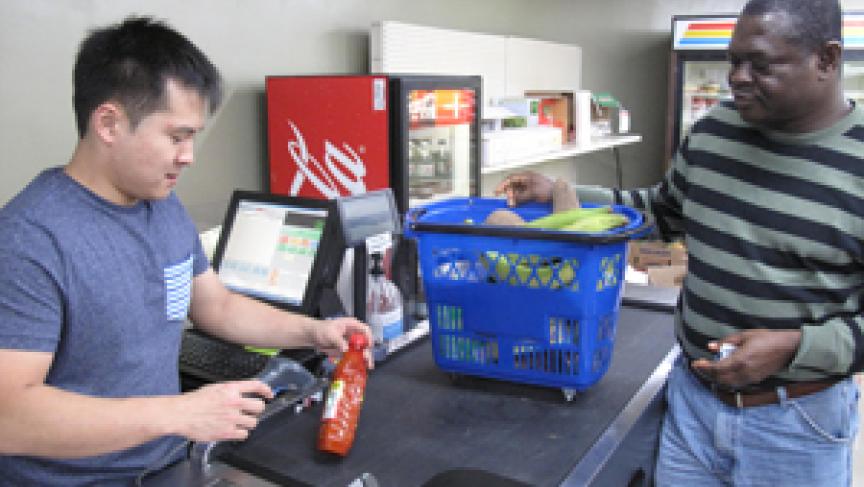 The shifting ethnic landscape in Columbia, Mo., is changing the city’s culture, including its food scene.

Some entrepreneurs, including the owner of the city’s oldest Asian grocery store, see the opportunity to reinvent themselves to cater to the cooking needs of the city’s new immigrant customers.

At Chong’s Oriental Market in downtown, food shipments arrive from Chicago, about a seven-hour drive away.

The store’s owner is Daewun Sin, whose parents migrated from Korea to Chicago, and finally to Columbia in 1990. Sin’s parents spotted the chance to take over a small grocery store and run the city’s only Asian market at the time, specializing in Korean and Japanese food.

But today, many of Chong’s shoppers are not Asian. In the span of an hour, customers from Ghana, Kenya and the Congo buy groceries here. Over the past decade, the number of Africans in the small city of Columbia has grown to about 1,000, according to surveys.

Some are professionals who’ve moved here for jobs. Others are resettled refugees from war-torn areas. The newer population represented an untapped market.

Sin decided it was time to break out and cater to new customers.

“We have other cultures that come to our store just to buy produce and things. They’re like, ‘Hey you should start carrying this’, and I’m like, ‘Maybe I should,’” Sin said.

Now, one section is entirely dedicated to African food, like yam and cassava flour. And Chong’s market is now the go-to shop for African ingredients in Columbia, with some customers trekking in from miles away.

Sin says his parents would never have thought to overhaul their market like this. But Sin studied culinary arts and thought he could make it work. So he scouted out products that customers mentioned, looedk up African staple foods on Google and watched cooking videos.

“First generation they come here, they’re just here to make it work,” Sin said. “Second generation, we always think about different things like, ‘Hey, how can we make this better? How can we do things differently?'”

William Kwaku Ntow is from Ghana and works as an agricultural scientist. He’s a regular Chong’s customer.

“I’m going to have a great meal this evening,” he said recently. Indeed, his basket brimmed with plantains, yams, palm oil and sardine tins, the Titus brand from Morocco. Rare finds in Columbia.

Ntow likes Columbia, but adds that if he couldn’t find what he likes to eat, that’d be a deal-breaker.

“I’m so used to the stuff that I used to enjoy back in Ghana that if I don’t find those things wherever I am living, I would find it very, very uncomfortable to continue to live there,” he said.

Chong’s market has become a regular part of the growing African community.

On Sunday nights, Violette Ndayisenga sings at church. She stands with the choir in a shiny orange outfit she made herself. Her sister sits in front, playing the drum. The church is where the town’s refugees from East Africa gather to pray in their native languages.

Five years ago, Ndayisenga and her family were resettled in Columbia from a refugee camp in Tanzania.

“When we come to America, God say, ‘Go to Columbia, you will live there,’” Ndayisenga said. “So God choose us Columbia, say, ‘Columbia will be your home.”

Back home after church, Ndayisenga puts a pot of water to boil on the stove for dinner. One of the family’s favorite dishes is fufu made from rice powder.

When the water boils, she puts in the fufu, which comes in 50-pound bags from Chong’s Oriental Market. Once cooked, it looks like mashed potatoes. Ndayisenga serves it with fish and tomato sauce.

Back at the market Sin, practices cross-cultural communication on a small scale. His father taught him good manners in Korean. Sin says it turns out those actions translate into other cultures.

“Even our African customers, when I hand them the receipt or the change or the card, I had them with two hands, or with my right hand under my left hand, and they see that, ‘Hey, we do that too.’ So they’re saying, ‘Oh, you’re very well mannered,” Sin said.

But Sin's always looking ahead. Sin wants to make the store even more international. Indian food is next. The only problem: finding enough space on the shelf.