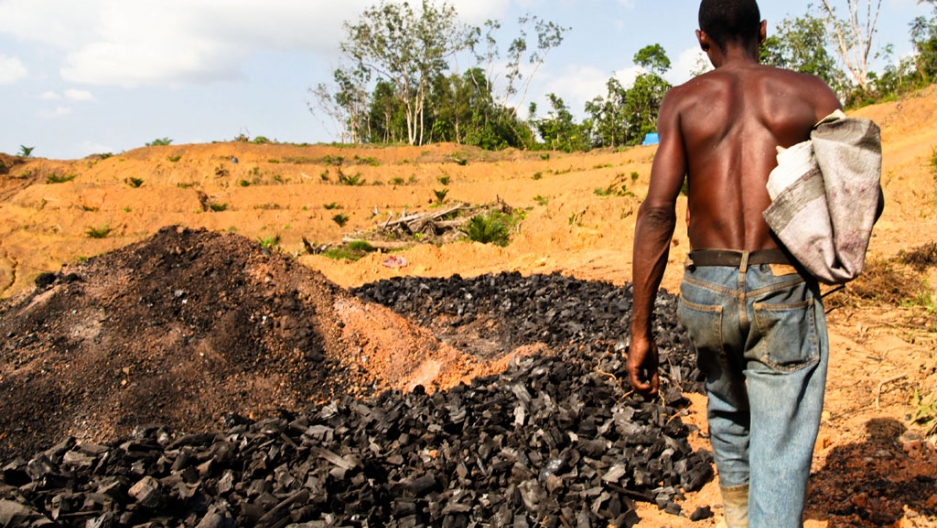 Magwiie Willy walks up to his tent in Bomi County, Liberia, past the remains of a rick of burnt logs that produced US$450 worth of charcoal after three weeks' work.
Credit: Ethan Baron
Share

BOPOLU, Liberia — In rural villages here, the role of “stranger-father” holds a key place in traditional community life. An outsider wanting to move into a village must find such a person to introduce him to leaders and take responsibility for his behavior. As trust builds, the outsider may be allowed to put up a hut and plant subsistence crops. Eventually, he may become a recognized member of the community, sharing a customary right to the land where the villagers live and farm.

American and Malaysian palm oil companies found a ‘stranger-father’ in the Liberian government. But in its zealous hospitality, critics say, the government violated international law and citizens' human rights.

Instead of fostering trust by consulting the affected communities, the government unilaterally signed sweeping deals. For many villagers, their first introduction to the newcomers came in the form of bulldozers clearing their crops.

No reliable estimates exist regarding numbers of people displaced. Villagers aren’t being directly forced off their land, but the companies “are cutting down so much cropland that people choose to leave,” said Jonathan Yiah, spokesperson for Liberian NGO Sustainable Development Institute (SDI). Sime Darby has paid $1.3 million in compensation for crops to 2,132 farmers, company spokesperson Tan Yee Pheng said in an email.

Liberia, colonized by former American slaves after the Civil War, is a largely English-speaking nation of four million, and receives about $200 million in annual US aid.

A Liberian government watchdog agency, the Liberia Extractive Industries Transparency Initiative (LEITI), was formed in 2009 and is currently investigating $8 billion in natural resource deals, including Golden Veroleum’s contract, for possible fraud and mismanagement.

Sime Darby, however, is not being investigated. The Malaysian company holds a massive lease which, in a concession agreement, the government described as "unencumbered” — free of mortgages, claims, liens or debts. And because Sime Darby’s contract was signed in April 2009, 10 weeks before the watchdog agency was legislated into being, it falls outside of the investigation’s scope.

By phone from Malaysia, company spokesman Carl Dagenhart said that Sime Darby only discovered later that a large population lived on the land.

Opponents call the oil palm agreements land grabs and say many villagers are losing their livelihoods.

"They took my land last year. They didn't pay for it," farmer Abdul Sombai, 65, said of Sime Darby, at a conference in the town of Bopulu, on November 27 to 29, which was organized by SDI and brought more than 150 leaders from affected communities together with international sustainable-development experts and activists. "They said the area is for them. A machine just came and cleared everything. They planted palm."

Receipts show that the company paid Sombai $1,284 for his crops, which included five and a half acres of cassava, at $150 per acre, but he was not compensated for the loss of land or future earnings.

Now Sombai lives on land not yet cleared for palm in Grand Cape Mount County, where potholed red-dirt roads and the wide Lofa River run through a rolling landscape of jungle and rubber tree groves. Like many men here, Sombai makes charcoal to support his wife and four children. A bare-subsistence diet and killing work — felling and chopping up trees, piling the wood into man-high ricks, and burning it beneath a shroud of dirt — show in his lean face and ropy, vein-popped arms. When buyers are plentiful he makes about $5 per day.

A declaration issued on November 29 by leaders of affected communities like Sombai’s opened with an ominous statement for a nation still fragile after years of civil war.

"In the interest of protecting Liberia and preserving the peace we as citizens have worked so hard to finally achieve, we hereby stand in solidarity," read the document, signed by the conference delegates in Bopolu.

"This land belongs to us. We were born here,” said conference delegate Sanford Massaquoi, vice-principal of Bopolu High School. “We don't want to see Sime Darby come here. In the future it will be a serious conflict. We'll surely drive them out."

"Those who are coming to your communities will be able to provide jobs for you," Nyepan said, his words greeted with sullen stares.

Between July 1, 2009 and June 30, 2010, government charges to Sime Darby amounted to $345,000, according to LEITI. Liberia has ratified several international covenants deeming access to land a human right. The African Charter on Human and Peoples' Rights, for example, recognizes citizens' rights to property, self-determination, and pursuit of "freely chosen" economic development. The Charter goes on to say that people can "in no case" be deprived of the right to utilize natural resources.

A constellation of such treaties forms international law conferring property ownership through traditional land use. Jurisprudence backing up the legal mosaic includes the 2010 Endorois People v. Kenya case, in which the African Commission on Human and Peoples' Rights ordered Kenya to restore land taken for tourism development and compensate those who had been displaced, said Tom Lomax, a lawyer for UK-based Forest Peoples Network, who spoke at the conference.

"In these traditional communities, people don't have individual property rights, they have collective community rights," Lomax said. "They're not based on a deed or a piece of paper, but their legitimacy and the whole basis of that right is built on custom."

"This is the first time in the history of Liberia that we are going to local communities to negotiate with them," Brandy said. "We're making big progress in modifying some of the mess we made." People in concession areas not yet developed can refuse development, he said, but added that government retains eminent domain, the right to take control of private property for public use.

A draft of a new policy intended to result in legislation conferring deeded property rights for customary use also came with a qualifier: "The Land Commission must further study the complex and crosscutting issue of concessions through a separate Concession Land Use and Tenure Task Force." Sime Darby spokesman Carl Dagenhart acknowledged that the concession area belongs to those living in it. "According to the international law, this is their property," Dagenhart said.

Dagenhart admitted that Sime Darby made mistakes early on, but said it is consulting communities and will allow them to decide where development takes place within the concession.

Sime Darby currently employs 3,700 workers, with a monthly payroll of $550,000, Dagenhart said. In Garnodeyan town, on the edge of the concession area, Esther Say, 39, obtained a US$5-a-day contract job in a company tree nursery. A mother of three girls and four boys, Say used to work long hours selling candy and cookies in her village. The consistent paycheck from Sime Darby and an 8 a.m. to 3 p.m. workday have improved her quality of life and job security, she said.

Sime Darby has set its direct-employment targets at 35,000, and is required to provide free medical care and schooling to employees and their dependents.

At the edge of Sime Darby's lease area, Magwiie Willy, 48, earns $15 to $30 per month making charcoal from forest trees, but he expects to be hired by Sime Darby as a chainsaw operator for a much better salary – $450 per month. "They promised, but they said we should wait," Willy said.

California-based journalist Ethan Baron is training Liberian reporters at Front Page Africa under a program funded by the British government and delivered by a Canadian NGO funded 30 percent by the Canadian government.

*This story has been modified to clarify that LEITI is investigating a total of $8 billion in natural resource deals, of which Golden Veroleum's contract is a part.