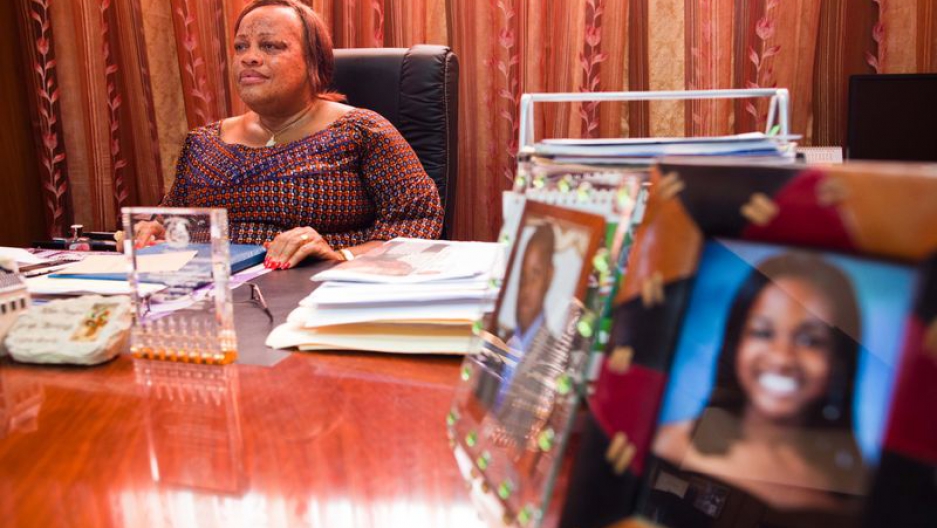 Liberian Gender Minister Julia Duncan Cassell on Dec. 26, 2012 in Monrovia, Liberia. The Gender Ministry paid for the funeral of Olivia Zinneh, who died at 14 after succumbing to injuries sustained during a violent rape.
Credit: Ethan Baron
Share

MONROVIA, Liberia — While protesters were battling police over a student's gang rape in India and the world was expressing outrage at the crime, 14-year-old Olivia Zinnah was buried here Dec. 22 with far less fanfare, after suffering years of pain and surgeries following a rape when she was 7.

Although the country's Gender Ministry made efforts to draw attention to Zinnah's death, her passing went unremarked but for a few stories in local media. Zinnah, who died of an infection in a Monrovia hospital a week before Christmas, was the fourth girl this year to succumb to rape-related injuries in this West African nation of four million, the ministry said.

For three years after her 2005 violation in a rural area outside Monrovia, Zinnah received only traditional healing, which can include herbs and sorcery. She was not taken to a doctor. Police were not called. When her uncle Lawrence Samuel came to visit the family in 2008, he was shocked to see Olivia in a terrible state, with poorly treated wounds and a systemic infection.

More from GlobalPost: India has a gang rape problem

"She was almost decomposed from the infection," said Samuel, 70.

Samuel asked women in the family what had happened and they told him Olivia had been raped by a family member, he said. Samuel reported the crime and named the suspect to the police, brought his niece to Monrovia for medical care, and contacted the Ministry of Gender, he said.

Ministry officials took on Olivia's case, paying for her medical treatment and four surgeries, the last of which left her with a colostomy bag.

"We did everything we could to save her," said Gender Minister Julia Duncan Cassell.

Doctors Without Borders (DWB) in 2011 reported that 92 percent of females treated for rape in its Liberia facilities were under 18. A DWB study published in November said that of about 1,500 females treated in Monrovia clinics in 2008 and 2009 after rape, four out of 10 were younger than 12 and one in 10 were younger than 5. "Half the survivors were children aged 13 years or younger and included infants and toddlers," the report said.

Because sexual violence so often goes unreported, it's impossible to know the true scale of the child-rape problem here. In many cases, families of raped children accept money from the rapist to hush up the crime, Cassell said. In Olivia's case, it does not appear her family accepted any money, but once the girl's uncle reported the crime, the rest of the family shunned both Olivia and her mother, Cassell said. That common social penalty imposed on those who break silence around rape cases combines with the payoffs to deter reporting and foster impunity for rapists, the minister said.

"There are a lot of other Olivias out there that we don't know about," Cassell said.

More from GlobalPost: No liberty for Liberian women as rapes continue

"For her it was difficult," Kiawu said. "She always had an urge to want to play like the other children. You would see her once in a while laughing, or trying to jump around. She used to smile every now and then."

Although linkages have been drawn between widespread sexual violence during Liberia's 14 years of civil war and the current levels of sexual violence, Cassell said the causes of Liberia's epidemic child rape go beyond the fallout from conflict that ended a decade ago. Poverty leads to the settlements and thus to impunity; poor education leads to a lack of understanding among males of the physical and emotional damage caused by rape; high rates of teen pregnancy lead to lots of mothers unequipped to secure girls from predators, Cassell said.

"You've got a 16-year-old girl with two children already," Cassell said. "How does she know how to protect her children?"

The alleged perpetrator of Olivia's rape was arrested, but released without prosecution. Gender ministry officials are investigating to determine why he went free, and plan to get the case reopened. "He needs to pay for that," Cassell said.

Her ministry paid for Olivia's funeral, and ministry officials were on hand to discuss the case with a handful of local media, part of Cassell's effort to bring attention onto the child-rape issue, and build awareness among the populace about the need to prevent and report sexual violence. So far, there's been no significant public reaction to the death of Olivia here or abroad.

Photo above: Olivia Zinneh, left, who died at 14 from rape injuries, is shown in an undated picture in the hospital with her friend Clara, who also would die of rape injuries. (Photo source: Olivia's funeral brochure, created and provided by Liberian Ministry of Gender.)

California-based journalist Ethan Baron is training Liberian reporters at Front Page Africa under a program funded by the British government and delivered by a Canadian NGO funded 30 percent by the Canadian government.