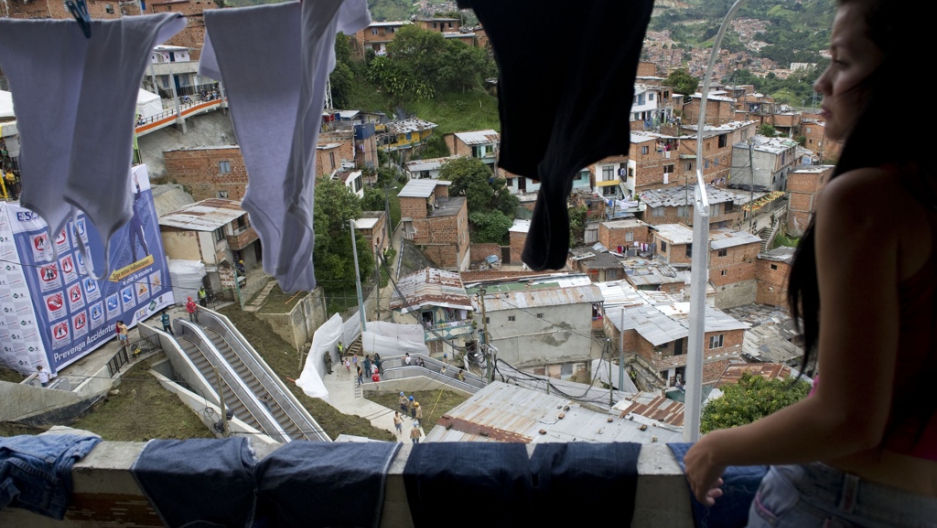 A woman looks out of her window at newly installed escalators leading up to her shantytown in the Comuna 13 barrio of Medellin, Colombia.
Credit: Raul Arboleda
Share

MEDELLIN, Colombia — The upper reaches of a mountainside slum called Comuna 13 are so steep that streets give way to staircases. To get home, many residents here used to climb the equivalent of a 28-story building.

But last year, Medellin officials installed a $7 million outdoor escalator — the first ever designed for a slum. The ride to the top now takes five minutes.

“It’s a relief because we no longer have to climb all those steps on foot,” said Jose Ivan Taborda, 69, who has lived in Comuna 13 all his life. “The escalator is comfortable, especially for older people.”

Rising above tin-roofed shanties with laundry hanging from clotheslines, the escalator, which has a bright orange roof, seems a little out of place. Many slum residents had never before ridden an escalator so city officials organized field trips to shopping malls so they could practice.

But rather than an extravagance, the electric staircase is part of a broader plan to reduce crime and improve living conditions in Medellin, the hometown of the late drug kingpin Pablo Escobar and the former murder capital of the world.

While police work is important, a major part of the strategy is to install public transportation and link these systems to newly built parks, libraries and community centers that encourage people to reclaim their neighborhoods from drug-dealing gangs.

Comuna 13 and other slums were founded by people displaced by Colombia’s guerrilla war. Many relocated to Medellin, which sits in a river valley, and built illegal settlements high on the mountaintops overlooking the city center. Isolated and ignored by politicians, many slum residents became gunmen for the Medellin cartel or joined guerrilla or paramilitary units that later controlled the neighborhoods.

“This displaced population didn’t feel like they were part of the city,” said Laura Isaza, a consultant for ACI Medellin, an organization focused on bringing foreign investment to the city. “These people used to say: ‘I live in this neighborhood and I don’t live in Medellin.’ So, one of our first steps was to try to gain their confidence and to make them feel that they are part of our city.”

One of the main projects integrating Medellin is a network of cable cars that opened in 2004. The aerial trams carry people from the mountaintop slums to the subway system, giving them access to the rest of the city.

Unlike exhaust-spewing buses, the system is quiet — and efficient. Reaching downtown via cable cars and the subway now takes 45 minutes rather than two-and-a-half hours. The gondolas move 20,000 people a day. They’re so popular they’ve inspired similar cable car networks in the mountainside ghettos of Rio de Janeiro and Caracas.

While the view high above the slums is impressive, some cable car passengers opt to read during the ride. They can check out books from a handsome new library and community center, designed by Bogota architect Giancarlo Mazzanti, that sits next to one of the cable car stations in the Santo Domingo slum. Several subway stations house smaller libraries carrying everything from self-help manuals to James Joyce’s “Ulysses.”

“We are trying to promote reading among the commuters,” said Ana Maria Rosario, the librarian at one of the subway stations. “Like they say, if you can’t bring Mohamed to the mountain, bring the mountain to Mohamed.”

Many of these experiments were cited last month when Medellin was named — along with New York and Tel Aviv — as one of the world’s most innovative cities in a competition sponsored by The Wall Street Journal, Citi, and the Washington-based Urban Land Institute. The winner, which will be chosen by the public through an online poll will be announced in January.

Medellin was selected for its “progress and potential” and was also cited for cutting CO2 emissions by 175,000 tons annually and for reducing crime. Although the annual murder rate remains high, it has been cut in half over the last decade and now stands at about 50 homicides per 100,000 people. That’s well below New Orleans’ rate of more than 70, but still over three times that of Miami.

In lauding the innovation displayed by Medellin and the other finalists, Anita Kramer of the Urban Land Institute said the reforms “reflect remarkable forward-thinking decisions on the part of municipal leadership. Taken together, they provide models for the world.”

But not everyone is convinced.

John Hernandez, a holistic healer who lives in Comuna 13, says the flashy new projects have distracted people’s attention from lingering issues. He says gangs still control the city slums where they sell drugs and extort businesses. City officials, he said, “are sweeping those problems under the rug.”

Indeed, when a reporter showed up to visit the escalator, city officials at first hesitated at providing a tour of the area due to recent gang shootouts. But at the same time, there are clear signs of progress.

Tourists now come to slums to ride the escalator and cable cars. Property values in Comuna 13 and other barrios are on the rise. What’s more, Colombian and foreign investors have shown new interest in Medellin.

Over the past five years, Hewlett-Packard, Kimberly Clark and Unisys have all opened production and research centers in Medellin. Though much work remains, Isaza of ACI Medellin says she believes the city has turned a corner.

“We still have a pretty difficult city and we are still struggling against violence in our city.” Isaza said. “But conflict in Medellin has changed ... We don’t have this huge war we had before. This is a conflict that could only be ended through real opportunities for the people.”