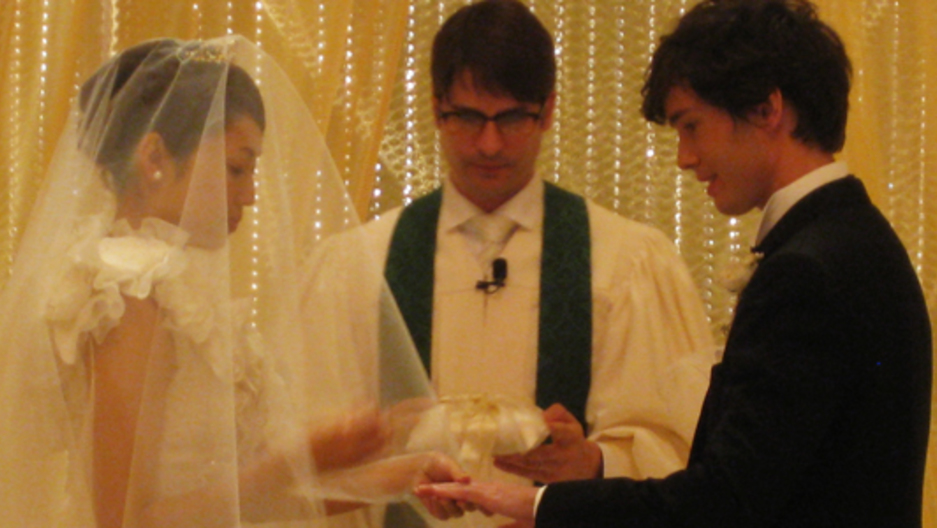 Share
As the saying goes, in Japan you are born Shinto, married Christian, and die Buddhist. Even though only a tiny fraction of Japan is Christian, a majority of couples have Western-style "white weddings." To meet the rising demand for ministers, wedding companies have lowered the bar and are now hiring any white person to officiate. The "white wedding" in Japan copies an archetypal Western ceremony. There are all the traditional elements: live music, an expensive white dress, and a giant cross hanging in the background. The couple swaps rings, cuts a cake at the reception, and at the end, the bride throws a bouquet to the next lucky girl. But perhaps the most essential part of the event is a minister who looks the part. In other words, a white person. At this hotel near the central train station in Nagasaki, wedding planners are putting on a typical ceremony. A string quartet and organ play Pachabel's Cannon in D to open the service and then minister Wayne Hamilton takes over. From behind the podium, Hamilton reads in both Japanese and English, delivering all of the traditional lines: A speech about the rings and their significance, the "do you take this man, do you take this women" bit, and of course the climactic,"you may now kiss the bride." At the end the choir sings a weddingifed version of "All You Need is Love," and the crowd showers the newlyweds with rose petals supplied by the highly organized hotel staff. But in this case, the couple has not really been married. This is only a mock ceremony. The hotel is photographing it to advertise its wedding services. That explains why the groom only gave his would-be, model-of-a-bride a little peck on the cheek instead of a full-on kiss. It also explains why the groom is a young, photogenic white guy with perfect teeth and curly brown hair. Wedding services often use white grooms in their advertising material. It's a common scheme to sell the "white wedding" fantasy to Japanese women. For the most part Japanese couples get married in either lavish hotel lobbies like this or in one of the many ornate chapels built to accommodate the booming wedding business. You see the advertisements for wedding services all over Japan–the movie-set chapels, churches like Disneyland castles, and happy brides in bright white wedding dresses. Nils Olsen, a Christian missionary from Washington state, says that "basically, the Japanese social concept of a wedding is that it's fashionable." He would know. Olsen has been putting on weddings in Japan for 20 years. Olsen is one of the few ministers in Japan that's actually ordained. He says that when he started there were far less "fake ministers," and that the money was better than it is now. Way better. He used to make almost $400 per wedding ceremony. Since wedding providers started hiring any white person to do his job, Olsen's pay has been cut in half. Unlike most white guys doing the wedding gig, Olsen is in it for more than just the money. He spends a few hours with each couple, introducing them to Christianity and rehearsing the ceremony. Most couples, he says, have no clue about the religion. They don't know basics like the meaning of the cross or narrative of Jesus. He shows them a video explaining the religious themes of the wedding and gives them a translated Giddeon's bible. Most stand-in ministers put in far less time then Olsen. Many aren't even religious at all. Several that I met are actually too embarrassed about their profession to speak with me. The one who will talk doesn't want to use his real name because he is afraid he is doing something illegal by ministering weddings. "Tom," as I call him, is an American student in Japan who does weddings for the same reason he teaches English. Money. He says, "I'm not ordained, I'm not religious, I don't understand anything that I'm reading in the actual ceremony." As long as his visa allows him to work, "Tom's" wedding gig is totally legit. Marriage ceremonies in Japan are completely separate from the legal stuff at City Hall. Anyone can officiate because the whole thing is just for show. "Tom" says he feels ridiculous when he administers weddings, and that the only reason they hired him was because of his race: "I'm white, I'm young, and that's it. That's the only thing that they care about. I'm a photo model is what I feel like. I'm a photo priest." An English friend got him the job. He gave Tom the priest outfit, complete with rosary and cross, along with a binder full of notes. For the first few weddings, Tom was really nervous. He was worried that he was pronouncing everything correctly, and that his English sounded "English enough." But "Tom" soon realized everyone was nervous and confused. He says there are only a few things you can't mess up. You need to pronounce the couples names right, the couple needs to get the right rings on the right fingers, and at the end they need to kiss at the right moment. And, hopefully, on the lips. The only instruction the wedding organizers gave him was to smile more, clap louder, and make sure to pronounce the word "kiss" with a really strong Japanese accent. So now he says "you may kissu the bride." It helps avoid confusion. After every ceremony, Tom strips down to his t-shirt and jeans and sneaks out of the ornate chapel through a back door. On the way out, someone hands him an envelope with about $200 in yen. When I tell him that real ministers used to make twice that, his eyes widen. That would have been great, he says. It's really expensive to live here.