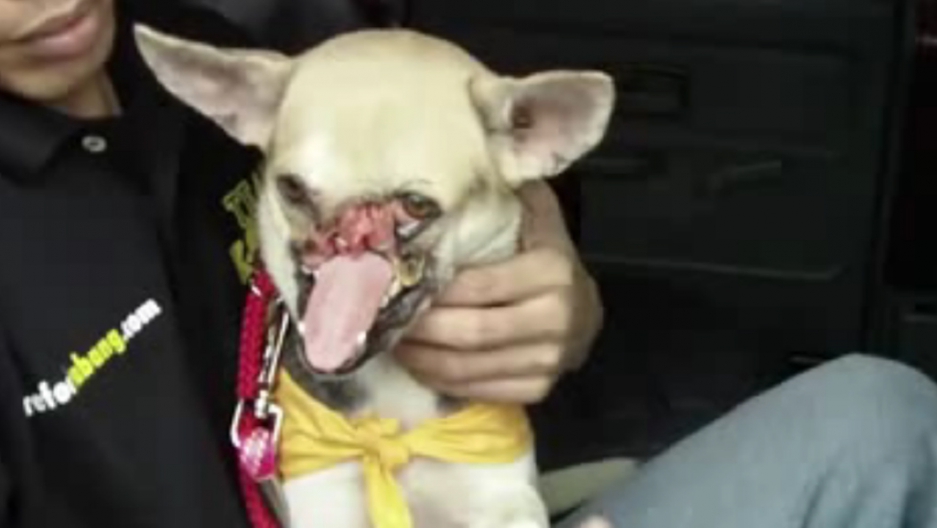 The hero dog without a snout, Kabang, is said to be cancer free and will soon undergo cosmetic surgery for her face.
Credit: Youtube
Share

The "hero dog" that lost her snout while protecting two children in the Philippines has beaten cancer.

Kabang was given a clean bill of health by University of California, Davis veterinarians who are caring for the dog after she was brought from the Philippines for treatment.

"There is no evidence of any remaining tumor," said veterinarian Gina Davis, reported the San Francisco Chronicle.

"As far as we know she has been cured of the transmissible venereal tumor."

The dog gained worldwide celebrity last year when it was reported that she had thrown herself in front of an oncoming motorcycle to protect two children.

The girls were unharmed but the dog had her snout and upper jaw torn off by the spokes.

A grassroots campaign raised money for the dog to be sent to the US for cosmetic surgery. Once Kabang arrived in California, doctors found the dog had both cancer and heart worms.

Both of those illnesses have to to treated before her face can be operated on.

"She wags her tail a lot and has become very attached to my veterinary technician, Lisa Sullivan. Overall we are very happy with how she is doing. She has come through everything very well. Her appetite is still good. She's still bright and happy."

Now that Kabang has defeated cancer, she will undergo difficult treatment for the heart worms using arsenic, which threaten to block major arteries.

The treatments will be adminstered throughout January, and Kabang will need one to two months to recover.