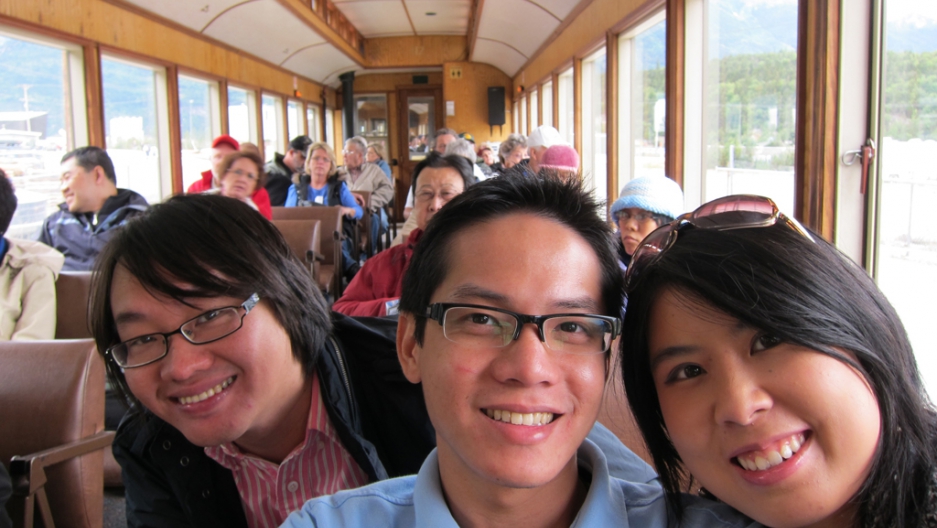 BANGKOK, Thailand — Chinawut Chinaprayoon and his Thai pals have nearly enough diplomas between them to wallpaper a living room.

His resume is worthy of Silicon Valley: a master’s in science and technology from Georgia Tech, a tech-focused business doctorate from Rensselaer PolyTech Institute in New York. Add to that yet another diploma from Chulalongkorn University, considered his native Thailand’s answer to Harvard.

Not bad for a 33-year-old born to a merchant family on the Thai coast.

But unlike the high-achieving Asian immigrants of decades past, longing to leave behind stumbling home economies and plant roots in America, Chinawut belongs to a new breed electing to chase opportunities back home.

After five years in America, Chinawut has returned to Thailand to found a different sort of startup. He and his two best friends are parlaying their US educations into a web-driven service exposing Thailand’s street-level cuisine to foreigners. Their business, Bangkok Food Tours, sends curious travelers out with local guides to explore street stalls and back-alley noodle joints.

Their self-proclaimed “creative tourism” operation is propped up by marketing savvy picked up in the States: online bookings via their polished website, drum beating on the influential travel site TripAdvisor, even wireless headsets for customers struggling to hear guides over the roar of Bangkok traffic. The cost for a three-hour tour is about $35.

He and his partners realized Westerners’ growing obsession with international cuisine — and “foodie” culture’s eternal search for the authentic — could be spun into a marketable commodity.

“I’ve had good feelings about America since childhood,” Chinawut said. “I thought, yes, this is where I had to go. The innovation, the big companies, the entrepreneurship. It’s all there. It seemed like a perfect fit for me.”

But a badly backlogged US visa system, America’s struggling economy, and simple homesickness have conspired to bring him and many others home.

“Even my international friends I met in America, they would rather go to Singapore, Hong Kong, China. Right now. The business opportunities are better in those countries,” he said.

Often times, so are the odds of landing a visa: The portion of US work visas offered to skilled foreigners has shrunk from 17 to 13 percent of total visa allotments since 2001, according to government figures.

A growing number of US politicians contend this is bad for America. One study by the non-partisan Partnership for a New American Economy predicts that, by 2018, America will lack nearly a quarter-million professionals with advanced science and technology degrees. In response, a newly passed House of Representatives bill, offering 55,000 new special visas, intends to fill those slots with US-educated foreigners.

Like Chinawut, his start-up’s co-founders also hold some of these coveted degrees. Kitichai “Kit” Siraprapanurat, an avid tech blogger who runs daily operations, has a master’s of science degree in information systems from Georgia State and an MBA from the University of Pittsburgh. The third founder, Naragain “Jan” Phumchusiri, holds an engineering doctorate from Georgia Tech.

None of them plan to return to the US. And Thailand is pleased to get its US-educated citizens back. Luring them home is a goal enshrined in policy through a government institute called “Samong Lai Glap.” Literal translation: “brain flow back.” The agency is specifically designed to harness what it calls the “brains and connections” of Western-schooled Thais as a “quick and effective way of getting qualified expertise.”

You won’t catch any of these PhD holders leading backpackers through Bangkok’s maze of curry stalls. That’s a job for their five walkie-talkie-packing guides, who have been reprogrammed to understand that, in lieu of spinning past temples and palaces, some tourists prefer to lavish their attention on wizened aunties at noodle carts.

Just as globalization helped lead the operation’s founders abroad in search of an American-caliber education, it is also propelling foreigners in the opposite direction.

In the West, Thai food is no longer an alien cuisine.

“I counted 200 Thai restaurants in Atlanta alone!” Chinawut said. So-called “foodie” culture and 24-hour food networks have brought once-exotic dishes into the mainstream. All of this is good news for Thailand, which last year hosted 19 million tourists — nearly double the amount 10 years ago. Many of them consider Thai food as one of the country’s main attractions.

“We want to introduce beginners to the real melting pot. It’s not just Pad Thai. We have Thai-Chinese, Thai-Indian, Isaan people from the northeast and royal Thai food,” Chinawut said.

Running this business via the web, and pumping up its profile with online marketing techniques, requires very little overhead.

Does Chinawut pine for a cubicle at a US tech firm? Or waiting more than a decade for a permanent residency visa in America?

He and his partners, he said, haven’t looked back. And he suspects most of his foreign-born, US-educated peers feel the same way.

“Of the other international students I met in America, out of many hundreds, how many said they planned to stay and work in America their whole life?” he said. “I’d say about 20. At most.”