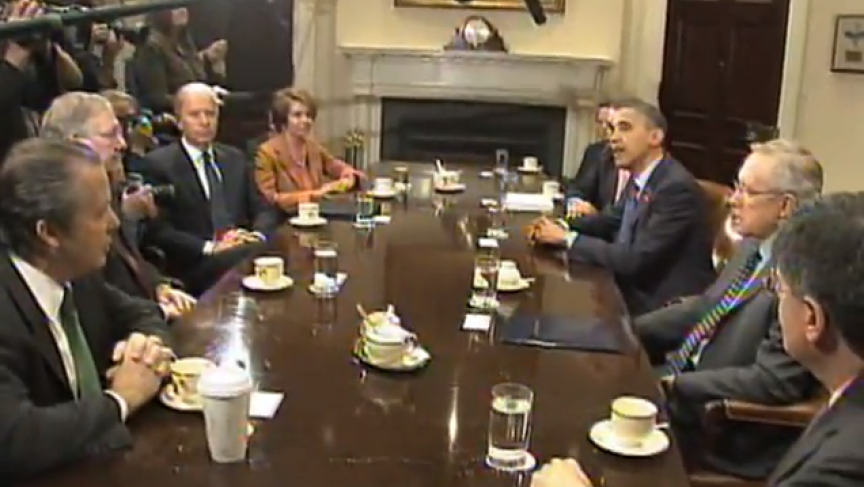 As part of the fiscal cliff debate, party leaders have been meeting to strike a deal. And now there are only a matter of days left. (Photo courtesy of VOA via Wikimedia Commons).

With the year nearly over and President Barack Obama and House Speaker John Boehner still think they can work out a deal to keep the country from going over the fiscal cliff.

Christina Bellantoni, political editor for PBS NewsHour, says when votes are postponed to later in the evening, there’s a sense things aren't coming together. That's what happened with a so-called Plan B he had to extend the Bush era tax cuts for those making less than $1 million a year — but letting them rise for so-called millionaires and billionaires.

In an emergency caucus meeting, Boehner looked shocked when he realized he had lost the support of more than 25 of his members when he could only afford to lose 24.

"In Washington it does matter if you've got sort of this momentum on your side and some of that backing from your core supporters and when (Boehner) doesn't, that weakens his hand," she said.

Since the beginning, Obama has said he needs to negotiate with Boehner, Bellantoni said. And now Senate Majority Leader Harry Reid is the next person who must make a move, with the Senate returning Thursday to figure out the next plan.

"Boehner does have to be involved and he does have to have a seat at the table and the president has made that real clear," she said.

But with the holidays nearing and the president's family preparing to leave for Christmas in Hawaii, the White House is telling reporters the president is prepared to work over the weekend, and to stay as long as is needed to get something done.

"What's interesting to me is a lot of the staffers that you talk to that have been crafting the actual details of what would go into the fiscal cliff overall package, say they're still working ahead as planned," she said. "A lot of these things are being done behind the scenes. It's really that big picture question and the big dollar answer that they need to get hammered out. And then they could move fairly quickly on this."

Boehner doesn't want to ask Democrats for help on the next plan, Bellantoni says. But if there's a deal the president likes enough, Democrats are likely to sign off on it, which is why Boehner made this gamble.

"(Boehner) was thinking if he could get enough Republicans to say yes on a tax increase of a little bit of magnitude, that's sort of the gateway drug — to a larger magnitude of a tax increase," she said.

And for members who are leaving in the next year after losing their seats, like moderate Rep. Charlie Bass of New Hampshire, they want to see something get done. Bellantoni says Bass can always run again and he could be looked at as one of the "saviors of the nation's economy" if the House could strike a deal.

But House members haven’t felt the same sense of urgency, Bellantoni says, unlike in other negotiations where things were taken right up to the edge. And even though there isn't much time to strike a deal, she says, she expects them to get things done.