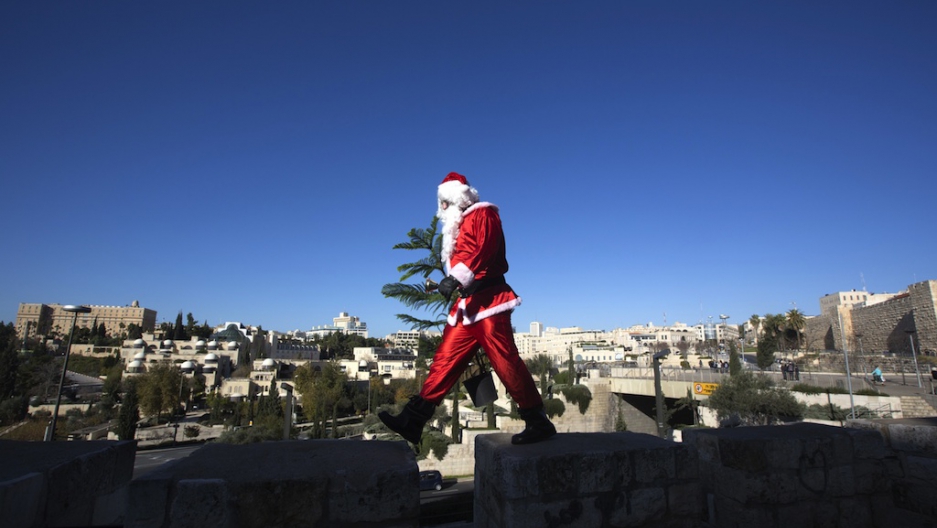 A Palestinian man dressed up as Santa Claus carries a Christmas tree and rings a bell as he walks along the wall of Jerusalem's Old City, on December 23 2012, as Christians around the world prepare for Christmas celebrations.
Credit: MENAHEM KAHANA
Share

HAIFA — For decades before the age of irony, this city on Israel's northern coast was called Red Haifa, in recognition of the reliably left-leaning voting habits of its residents.

Haifa has traditionally been identified with its muscled stevedores, its hearty seafood, its hardworking port, its steep cliffs rising from the Mediterranean to the heights of Mount Carmel — and for the Technion, the gleaming institute of technology nestled on a quiet green campus.

In short, Haifa has always been a northern town of geeks and laborers, more often than not mocked by stern Jerusalemites and frivolous Tel Avivis for its sturdy agreeability.

But pleasant, it turns out, is not so bad. The serious, pale students with gliders and protractors are still here, as are the porters and the seamen. But wander up Haifa's Ben Gurion Boulevard towards the Baha'i Gardens today, past UNESCO For Tolerance and Peace Square, and you will find yourself surrounded by a dizzying display of some 40 decorated Christmas trees, 25 Hanukkah menorahs and signs pointing towards the city's historic German Colony, a neighborhood of quaint stone chalets established by Templars where a month-long festival has taken over.

Wadi Nisnas, the adjacent Arab neighborhood, is garlanded and glittering—on weekends its narrow streets overtaken by a chaotic array of stands offering everything from antique jewelry to "Christmas Knafe," a glistening white version of the classic cheese and vermicelli desert.

December in Haifa has become synonymous with the Festival of Festivals, or, in the words of ubiquitous radio announcements voiced by mayor Yona Yahav, Haifa's Holiday.

The Festival itself has become Israel's version of Festivus, a secular celebratory carnival of nothing too specific. Organizers estimate that about 200,000 people will participate in the Festival of Festivals this year.

Haifa has always been proud of its reputation for easy-going tolerance. Twenty years ago, as a winter approached in which Hanukkah, Christmas and Ramadan coincided, the director of Beit HaGefen, the Arab Jewish Cultural center that serves as a city-wide hub, decided that instead of marking each holiday on its own, she'd rather throw one big party with elements of each.

Her successor, current general manager Assaf Ron, says the central idea behind the Festival is "Haifa as a path of tolerance."

On a warm autumnal Saturday, girls from Tel Aviv in tee-shirts wearing ersatz Santa Claus hats saunter towards a large stage. A Muslim woman wearing a head covering, visiting from the village of Musmus, guides her daughters towards a gallery displaying works related to this year's theme, "Log In- Log Out." ("They love painting," she says.) All materials are printed in Arabic and Hebrew.

English readers are not as lucky. Olfat Haider, the center's program director, does not apologize for the absence of English.

"We are working on it," she says, "but we are mostly here for our local public."

It is difficult to fully describe the cosmopolitan/provincial equation in Israel, where people of multiple ethnicities cohabit by and large peaceably while often maintaining an extreme isolation one from the other. It is not uncommon for a Jew never to have attended a Muslim wedding. Similarly, it is all too common for a Christian not to have stepped inside a synagogue. The Druze, the Baha'i, the Cherkessians—all coexist while in many ways remaining apart.

Haifa's festival may be the most successful Israeli hybrid. Instead of wondering why the rest of the world adorns itself in tinsel and stars, Haifa in December cheerily goes along—without asking too many questions.

Restaurants are decorated with merry Nordic images of St. Nick. Candles are lit on trees and candelabra, side by side. Druze couples serve up tray-sized, paper-thin pita breads smeared with labaneh, an artisanal goat cheese.

For visitors native to Haifa and from further away, the month-long festival provides a rarely found combination of the familiar and the other—served up with a smile.

The occasional unhappy scowl is heard from religious authorities. Just before Christmas, a rabbi employed by the city of Haifa published an edict warning that establishments decorated with "non-Jewish symbols" ran the risk of losing their Kosher certificates.

He was overturned on the same day by Mayor Yahav, who rushed back to the radio stations to say the statement had been recalled and there would be no repercussions for halls hosting New Year’s or Christmas parties.

It was, as Assaf Ron likes to say, another good day for the "forces of living together well."