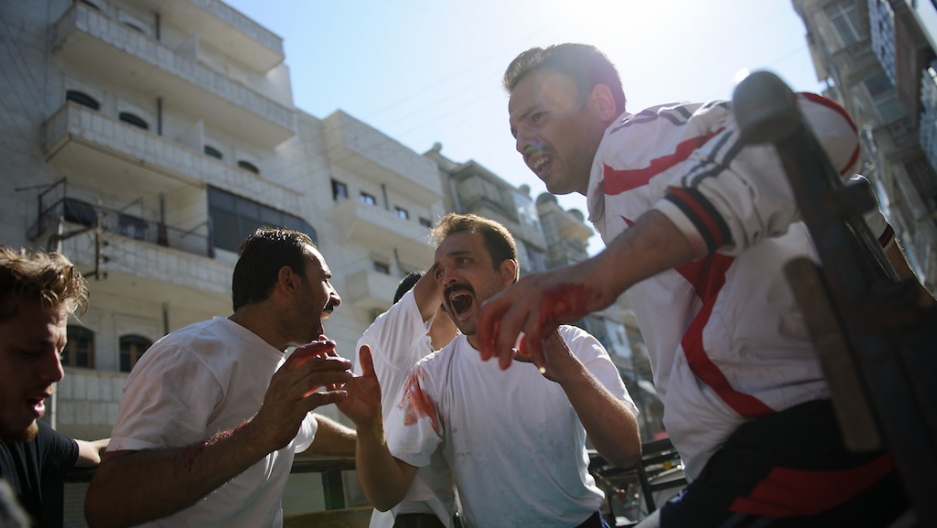 Syrian men mourn the death of a man who was killed by shelling near a bakery in the Tariq al-Bab district of the northern Syrian city of Aleppo on August 10, 2012.
Credit: Phil Moore
Share

A government air strike on a bakery in Hama province in central Syria has killed and wounded dozens of people, including women and children.

Some sources were reporting up to 200 dead in the blast, which occurred in the town of Halfaya, according to Reuters.

The BBC said if activist reports are true, it would be "one of the deadliest air strikes of the [Syrian] civil war."

"There is no way to really know yet how many people were killed," said local activist Samer al-Hamawi. "When I got there, I could see piles of bodies all over the ground. There were women and children."

"We hadn't received flour in around three days so everyone was going to the bakery today, and lots of them were women and children," Hamawi added. "I still don't know yet if my relatives are among the dead."

More from GlobalPost: Series: Inside Syria

Rebels of the Free Syrian Army have been making a strong push to capture Hama province, and they recently took over army positions in Halfaya and declared it a "liberated area," BBC News reported.

Human Rights Watch has condemned army air strikes on bakeries in the past, accusing them for not using enough precision in their targeting of rebel bases, Reuters reported.

Over 44,000 people have been killed in the 21-month-long civil war, including nearly 31,000 civilians, according to opposition activist groups, BBC reported.

More from GlobalPost: Neither side strong enough to win in Syria, says VP: Report