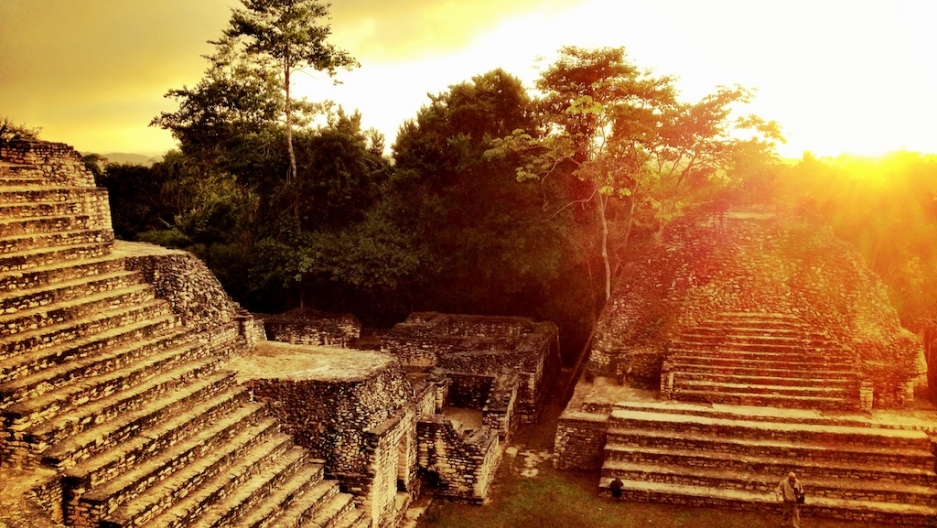 Caana, or Sky Temple, at Caracol archaeological site in western Belize, is one of the largest, most impressive pyramids in the Maya world.
Credit: Joshua Berman
Share

SAN IGNACIO, Belize — Caana, or Sky Temple, at Caracol archaeological site in western Belize, is one of the largest, most impressive pyramids in the Maya world. Even more than a thousand years after it was built, it remains the tallest manmade structure in all of Belize, a tiny country in Central America with both ancient Maya ruins and modern Maya communities.

Caracol is located at the end of a long, red-clay road near the Guatemalan border. On Dec. 21, 2012, the Belize Institute of Archaeology issued special camping permits and off-hours access to travelers. The reason? 13 b’aktun: the completion of the Maya Long Count calendar.

“Feliz b’aktun!” That's how people in western Belize are greeting each other this week, wishing each other happiness and cheer as the Long Count completes a major cycle.

Most (but not all) Maya scholars acknowledge that the Maya Long Count does indeed have an end-date that correlates to Dec. 21, 2012. Except that it's not an “end-date” in a doomsday sort of way — the Maya never said anything about a 2012 apocalypse. So while the rest of the world joked and obsessed about “the end of the world,” the Maya region is still observing the cycle change.

This week, across the "Mundo Maya" — swaths of territory once ruled by the indigenous group in southern Mexico, Guatemala, Belize, and parts of El Salvador and Honduras — modern Maya villages, as well as the archaeological sites are awash in celebration and ceremony.

At Caracol, Dr. Jaime Awe, director of archaeology of Belize, organized the event. Maya elders came from southern Belize to perform a sacred fire ceremony, and the camp cooks prepared traditional Maya feasts for dinner and breakfast. There were about 300 people from all over, only a handful of whom witnessed the Maya sunset ceremony atop Caana and the 4 a.m. solstice offering. A few revelers were among the crowd, but the distance from civilization kept things rather quiet.

At Chichen Itza, a major archaeological site near Cancun, Mexico, tens of thousands of people arrived to mark the day. Traffic was backed up for miles and makeshift parking lots appeared along the roads.

In the neighboring village of Piste, outside the Chichen Itza gates, a four-day gathering called "Synthesis 2012" hosted musicians and spiritual leaders for “an unprecedented celebration to welcome a dawning of a new era of renewal, balance, and harmony," the organizers claimed.

Sandy Azancot, a tourist from Belize, spent the day of Dec. 21 at the site.

“It was a mixed bag of people there,” she said. “The usual tour groups, individual sightseers [like us] and lots and lots of New Agers and hippies! People were periodically joining hands and encircling El Castillo [the big pyramid], dancing around it in a clockwise fashion and cheering.”

Smaller Maya communities near lesser known archaeological sites chose not to invite the world to their sacred event. Tony Rath, a photographer from Belize, went to Santa Cruz, Toledo in southern Belize. He was invited by the Maya Leaders Alliance and the Q'eqchi Maya Healers Association to document the event. He said the women formed an assembly line to make corn tortillas while the men butchered four pigs for the village.

“I chose to go to Santa Cruz because it was a local celebration,” said Rath. “Things started at 5 o’clock with talks and music and food, and lasted through the night till dawn when we went to Uxbenka for the Mayejak ceremony, then back to Santa Cruz for the full Cortez Dance.”

Tourists were not invited. Rath continued, “I had a long chat with Victor Cal, a leader of the Q'eqchi Healers Association. They are celebrating the end of the 13th b'aktun and the beginning of the next. They think the whole ‘end of the world’ thing is a travesty to their beliefs, and the commercial activities at other sites, with robed hippies and faux ceremonies, are a shame.”

Back at Caracol, Dr. Awe said, “Nothing is ending. It’s a new beginning for all cultures under the sun.”

Joshua Berman is author of "Maya 2012: A Guide to Celebrations in Mexico, Guatemala, Belize & Honduras." Follow him @tranquilotravel.

Modern-day Maya: What end of the world? (PHOTOS)