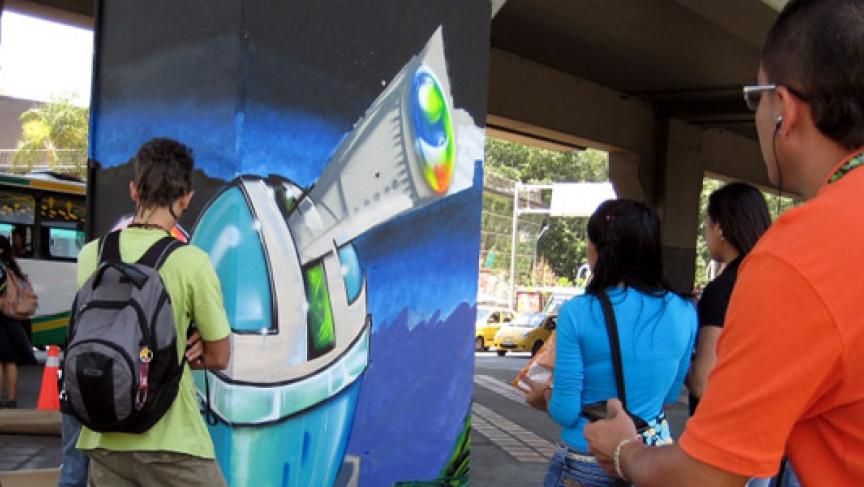 Graffiti artists in Medellín paint pillars sustaining the city's elevated train while a crowd looks on. (Photo by Shannon Young.)

Medellín, Colombia’s second largest city, was once considered the most violent in the world.

That was in the days when Pablo Escobar and his drug cartel were headquartered there. Since that ended, the murder rate in Medellín has gone down. But violent crime is still a big issue and one that has been steadily increasing over the past few months.

One way the city is fighting back is through art. And at the heart of that effort are community centers that provide at-risk youth with non-violent alternatives to the gang lifestyle. One example is the Moravia Center for Cultural Development, which sits in a neighborhood built in what used to be Medellín’s waste dump.

The center serves more than 1,000 local youth with courses in music, theater and visual arts.

One of the center’s strategies is to engage entire families from the neighborhood, some of whom may be involved in criminal activities. But somehow the center avoids attracting trouble.

“We’re neutral in the conflict,” said staffer Yeison Hendo. “But that doesn’t mean we allow it to perpetuate. We use education and culture as a means to create conditions of peace and tolerance. Everything we do is so that we can get along with each other. At the beginning of each cycle of coursework, we always hold a class on the culture of non-violence, which is what we promote here.”

Promoting non-violence may sound easy, but it can be a delicate dance in a neighborhood where armed groups actively recruit young people.

“Our youth have two options,” said Lina Mejia, who co-directs Platohedro, a multimedia training program for at-risk youth in Medellín. “Either they go to the army and pick up a weapon, or they’re taken by ‘el combo’ and they have to pick up a weapon. So, it’s like you’d think our youth, the only option they have is death.”

Mejia calls her program a third option for kids, one that allows them to avoid guns and crime.

And just as gangs can lose new recruits to a multimedia training program, the hyper-territoriality of the gangs has found a push-back in cultural initiatives aimed at reclaiming public spaces for neighborhood residents.

La Casa Morada is a shared studio space for musicians in the Comuna Trece, one of Medellín’s most conflict-ridden neighborhoods. When Casa Morada opened to the public, it held a concert in its small front yard. The audience spilled onto the sidewalks, the streets and up on the balconies of neighboring buildings.

In a pause between sets, a rapper named Jeihhco spoke about a quarter century of keeping culture alive in Medellín, even through the darkest days of Pablo Escobar’s reign.

“This is what it’s about,” Jeihhco said. “It’s about filling these spaces with life. It’s about giving hope to our kids who are here hanging out, watching what we’re doing. A better world is possible and we’re the ones who need to build and rebuild this society.”

Singers can also serve as a community’s oral historians. Many of the artists in Medellín’s active hip hop community use their lyrics to tell stories that rarely appear in Colombia’s mainstream press.

Don Vito is the front man for Niquitown, a ska band that’s been around since the 1990s. He’s also an MC with the Bellavista Social Club. He said music in Medellín tends to be a social activity in which lyrics become a vehicle for preserving collective memory and narrating the daily reality lived in the barrios.

While artists attain a level of notoriety and respect within their communities, they’re not immune to the violence. Since 2009, nine rappers from the city’s hip-hop movement for peace have been murdered.

While the ongoing violence causes both pain and fear, silence isn’t an option, Mejia says.

“War has been for so long here and it’s a war that’s never been declared a war,” Mejia said. “It’s like an imaginary war, so we’ve got to keep quiet about it. And it’s that silence that lets violence continue. I think the only thing that would solve the situation, or at least loosens the tension of the people, is being able to write, sing, do radio, having cultural groups — giving people the feeling that they’re together with somebody else, and that they’re not alone going crazy about their feelings or emotions.”

There are many levels of violence in Colombia. Right now, the national government is focused on peace talks with leftist rebels, in an effort to end decades of armed conflict.

But at the local level, in communities where options for teens are limited and where violent crime and drug trafficking are rampant, sometimes the best hope is offered by something as simple as a song.