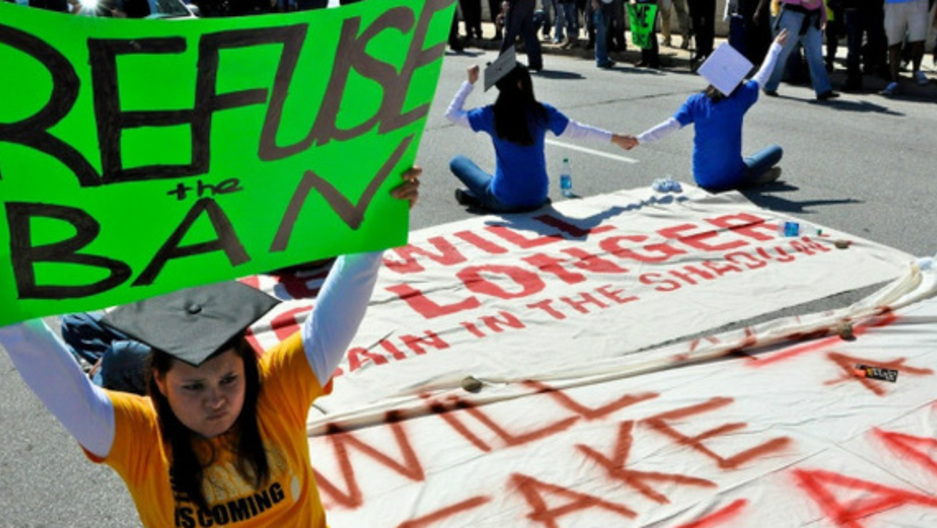 Undocumented immigrants are barred from enrolling in Georgia's five most selective public universities. The ban came after a Board of Regents' self-study. (Photo by Caitie Leary/Freedom University.)

Three professors have come together to create Freedom University, where undocumented immigrants dedicated to learning can take courses for free.

“They do not have access to the five most competitive universities in the state,” she said. "We offer classes similar to the ones we offer in our classes at the University of Georgia."

Though Freedom University hasn’t received accreditation, which they’re working on, Kaplan says the program prepares students to go back to school.

"Most of (our students) were very accomplished high school students. They graduated from high school in the state of Georgia and they cannot find a venue to continue with (education). Students come to our class just to learn,” she said.

Maricela Delgado, a student at Freedom University, says the professors help students find other universities and ways to find scholarships. Delgado says she plans to continue her education in the future.

The George Board of Regents barred immigrants from its most competitive schools after a study found there were 500 undocumented people taking classes in the system. All except one paid out-of-state tuition.

"There’s not an economic reason to have this ban placed. So that shows how unfair the situation is," she said.

Now, the regents require all undocumented immigrants to pay out-of-state tuition at the few schools were they are still allowed to enroll.

As for repercussions the professors face for running Freedom University, Kaplan says there haven’t been any.

"The speaker of the Board of Regents' has declared to the press once that as long as we do this in our free time and it doesn't interfere with our jobs within the university system, we can do with our time whatever we want,” she said.

But rather than leaving to attend school in another state, Delgado, who grew up in Georgia said attending Freedom University has given her the opportunity to learn. And it proves there are people in Georgia who do care about the students unconditionally.

Delgado said her dream right now is simply to be successful. She says when she was in high school she wanted to be a registered nurse and took a course to be certified as a nursing assistant. Although she passed all of her clinical and state exams, because she lacked a social security number she was unable to receive her certification.

“All my dreams kind of vanished because I was planning on being a nursing assistant and paying my university to become an RN in the future. All of that went away. I plan on becoming a translator in the future or opening up a business. I don't know exactly yet, but I do want to further my education,” she said.

Freedom University offers one to two classes per year and doesn’t have the same structure as a traditional university. Their hope, Kaplan says, is the program will help bring awareness to the community.