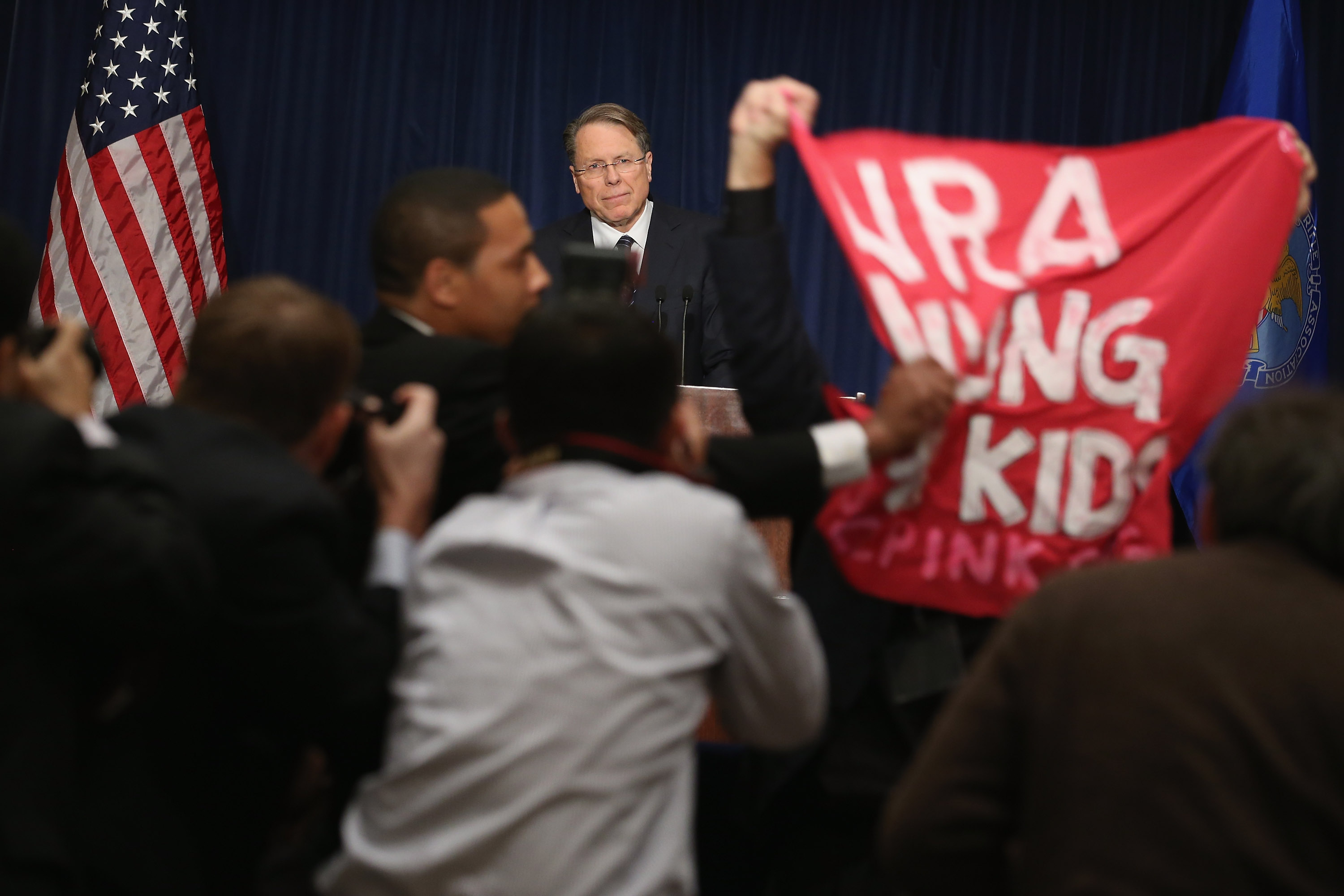 A demonstrator from CodePink holds up a banner as National Rifle Association Executive Vice President Wayne LaPierre delivers remarks during a news conference at the Willard Hotel December 21, 2012 in Washington, DC. This is the first public appearance that leaders of the gun rights group have made since a 20-year-old man used a popular assault-style rifle to slaughter 20 school children and six adults at Sandy Hook Elementary School in Newtown, Connecticut, one week ago.
Credit: Chip Somodevilla
Share

The National Rifle Association held a press conference in Washington, DC Friday morning, a week after a horrific shooting at a school in Newtown, Conn. that left 20 children and six adults dead.

Gunman Adam Lanza also killed his mother and himself during the rampage in Newtown, authorities have said. The massacre at Sandy Hook Elementary School was one of the worst mass shootings in US history.

Dave Keene, the NRA's president, told reporters: "Like most Americans, we were shocked by what happened" in Newtown. He quickly turned the podium over to Wayne LaPierre, executive vice president of the NRA, who held the microphone for the majority of the conference.

"Until the facts are known, the NRA has refrained from comment," said LaPierre, offering an apparent defense of the NRA's conspicuous silence in the wake of the shooting. "While some have tried to exploit tragedy for political gain, we have remained respectfully silent," he continued.

LaPierre said the most important question of the moment is: "How do we protect our children right now?"

He continued for several minutes.

"NRA, stop killing our children!" a protester shouted, interrupting LaPierre. The protester, waving a sign and identified as a member of the activist group Code Pink, continued to shout for about a minute before being escorted from the conference. LaPierre picked up where he left off seamlessly.

Another protester later interrupted LaPierre a second time. The woman shouted, "The NRA has blood on its hands. Shame on the NRA. Ban assault weapons now!”

LaPierre offered scathing remarks about the media, insinuating that their coverage of violent acts is to blame for the introduction of high amounts of violent content into American children's worlds. The media bring “wreckless behavior and criminal cruelty” into homes via television and other platforms, he said.

He also blamed violent video games and movies, calling material that allows vivid fantasizing about killing people “the filthiest form of pornography,” and suggested that "an active national database of the mentally ill" would help identify potential killers.

LaPierre continued with a confrontational tone toward members of the press.

“I can imagine the shocking headlines you’ll print tomorrow,” he said. "Your implication will be that guns are evil."

"Is the press and the political class here in Washington, DC so consumed by fear and hatred of the NRA and American gun owners, that you’re willing to accept a world ... where a school principal is left to surrender her life to shield those children in her care?" LaPierre asked rhetorically. “No one … has the right to impose that sacrifice.”

LaPierre also blamed the Obama administration for making cuts to budgets for school emergency planning, and for committing funds elsewhere instead.

“With all the foreign aid the United States does … can't we afford to put a police officer in every single school?”

LaPierre said the NRA will take the lead to develop and fund a “model national school shield emergency response program” for any school that desires it.

NRA officials refused to take questions from reporters following the conference, but said they will answer questions next week.

This story has been edited from an earlier version. LaPierre's comments about “the filthiest form of pornography” were made in reference to video games, not media coverage.