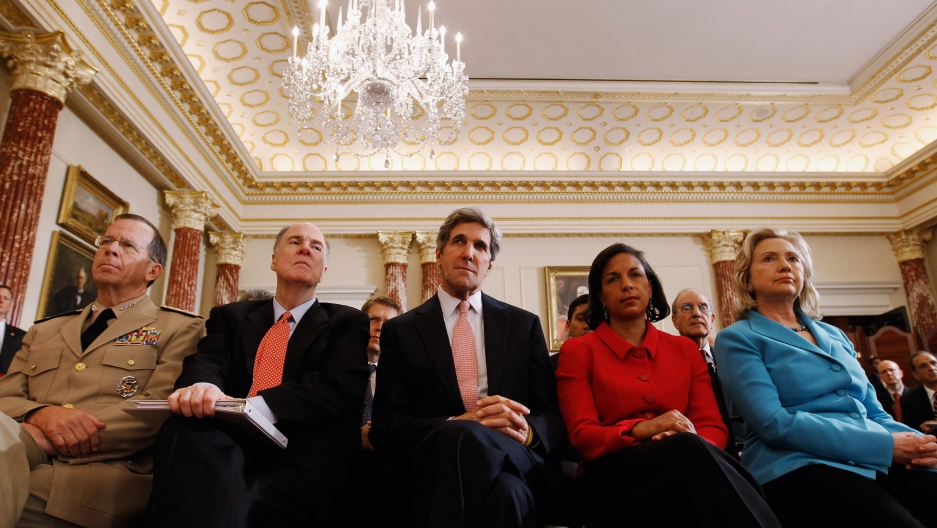 He's no stranger to scrutiny, having occupied the political stage since 1982. Where to start in your review of his official bio? Here are five things you should know about the United States' new most important diplomat.

Kerry has embraced the Twittersphere after a slow start, often tweeting with a sense of humor (see: his recent tweet about his full head of hair as compared to other Senators).

He's also used the microblogging site to take a well-placed jab or two at opponents; most recently, GOP Presidential candidate Mitt Romney, whom he stood in for during Obama's debate practice.

Kerry tweeted the day before the election:

was surprised to run into Mitt this afternoon in Sylvania, OH yfrog.com/odlldsej

Interesting choice, since Kerry himself has been criticized for his reserved demeanor (some say it cost him the presidency in 2004), but a bold move nonetheless.

2. He had a worldly childhood.

Kerry is used to life abroad: his father, Richard Kerry, was an American foreign service officer, and moved his family around often.

The young Kerry had attended seven different schools by the time he was thirteen years old, and learnt several European languages during his time at a boarding school in Switzerland while his father was stationed in Berlin, Encyclopedia.com reported.

Many credit his father's career and influence for instilling Kerry with his love and interest in politics.

Well, one notorious mobster, to be exact: George Edgerly, a Massachusetts career criminal who was accused of beheading his wife but acquitted, according to Fox News. Edgerly stood accused of rape in 1977.

While working for the district attorney of Middlesex County, Kerry won the case against Edgerly, a huge success, during his first year, the New Yorker reported.

"I was interested in the prospect of the law and trying to enforce it in order to protect people, and just provide the kind of civil society that we all hope for," Kerry said in a 2004 interview, Fox reported.

Kerry, who currently serves Massachusetts' senator, is the he tenth most senior politician in the Senate, and the second longest serving Senator in his seat to date, right behind Edward Kennedy, according to his website.

After graduation, Kerry volunteered to serve in the United States Navy, and served two tours of duty in Vietnam as a Lieutenant, saying it was "the right thing to do," according to his website.

On his second tour, he took on one of the most dangerous assignments of the war, operating Swift Boats in the river deltas. He earned a Silver Star, a Bronze Star, and three Purple Hearts.

But upon returning from war, he became one of the anti-war movement's outspoken advocates, co-founding Vietnam Veterans of America and becoming a spokesperson for Vietnam Veterans Against the War, according to Biography.com.