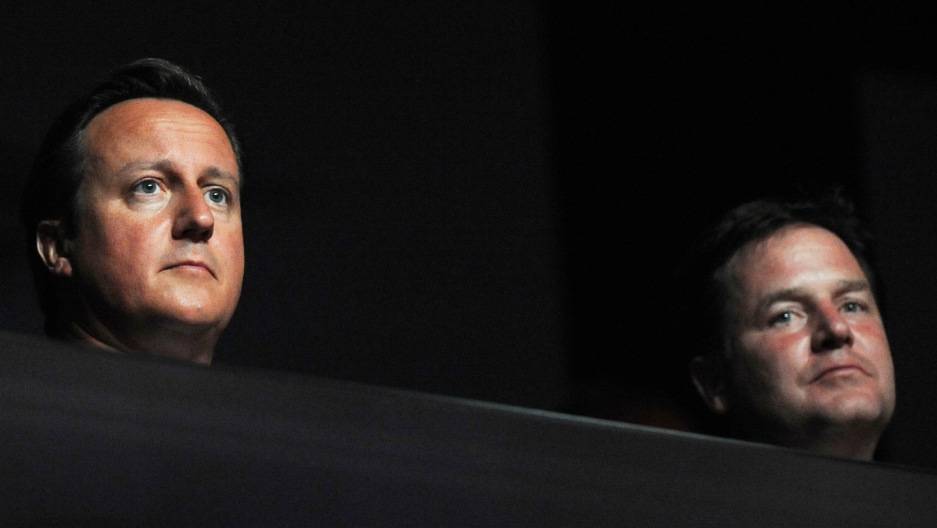 LONDON, UK — Sometimes prediction is easy. As 2011 bled into 2012, there was panic everywhere about the euro: It was doomed and it was going to take the global economy with it.

It was easy for a calm, rational person like myself, with extensive experience of European Union processes, to predict the euro would survive, although possibly without Greece. Got most of that one right.

As Bashar al-Assad unleashed Hell on the besieged city of Homs, the conventional wisdom recalled that that’s what his father did to Hama 30 years earlier to successfully end a rebellion.

Having covered enough dictators’ downfalls, however, I knew it was different this time, and that even if it took all year, Assad was gone. Now even Russia’s leaders seem to agree.

Sometimes prediction is hard. As this year winds down, entropy has taken hold. A great, shapeless miasma has come to define daily life in Britain and the part of the world I report on.

In the EU and in the Middle East, 2013 appears to be shaping up as a year of ongoing processes: more euro zone muddling toward closer political and fiscal union; more disappointments for secular democrats in Arab countries; more hysteria from Israel about the Iranian nuclear threat, with no military action.

Trying to predict 2013 by peering through the miasma, the big question on my mind is: Can Britain's coalition government survive? By all rights it shouldn't.

In the most recent Yougov survey, less than a third of Britons said they support the coalition. Fifty-nine percent oppose it. The combined poll ratings of its two parties, the Conservatives and their junior partner Liberal Democrats, don't equal those of the opposition Labour Party.

It's easy to understand why the government and its parties are so unpopular. The economy has been hammered everywhere except London and its suburbs by an ideologically driven set of austerity measures that led to a double-dip recession in 2012 and the possibility of a third dip in the first part of next year.

The Bank of England is forecasting a miserable 1 percent growth in GDP this year. Since its prognostications have been overly optimistic every year since the crisis began, however, I predict it will be off again and that growth will be fractional at best.

When matters become that bad economically and politically, grown-ups tend to blame someone else. For Conservatives, that means the EU. Most of the party wants to withdraw from the union. Lib Dems are very pro-Europe. They would also probably like to moderate the austerity cuts.

Irreconcilable differences. So will their marriage fall apart next year?

No, says one of the wisest heads among political journalists, Michael White of the left-leaning Guardian. Lib Dems would be annihilated in the election that would follow and Labour leader Ed Milliband has more work to do to convince voters to trust him with the economy.

I’ve lived here long enough to watch some dysfunctional governments survive full five-year terms, as John Major’s did in the 1990s — and some fall after a few years, as in the case of Edward Heath’s in early 1970s.

But I just don't see how the current arrangement can continue. There’s no economic rescue on the horizon. Virtually all job growth in the last year has been in part-time work. Prime Minister David Cameron presented himself as a pragmatic, traditional Conservative, but his party's backbenchers and grassroots are becoming as ideologically hard-right as the Republican Party is in America.

The Lib Dems have virtually nothing in common with the Conservatives except a desire to address Britain's structural deficit. But you can't do that without growth, and there’s no growth coming in 2013. There isn't even a bread-and-circus spectacle such as the Olympics to cheer everyone up.

So I don't see how the government can survive until 2014.

Whether it does or not, the crisis over Britain's membership in the EU will reach boiling point this coming year. That's a prognosticating dead cert. Given a free vote, most Britons would opt out. The pressure is already on for Cameron to call a simple in-or-out referendum, the prospect of which already has Washington exercised.

I'm not sure the vote will happen in 2013, but the commitment to holding a ballot will be made. It might coincide with the 2014 referendum on Scottish independence. Indeed, 2014 looks to be a moment when all sorts of questions about Britain's constitutional arrangements come up for a vote. Maybe Britain will be given the option to join the United States as the 51st state around then.

Just joking. But, really, isn't it about time the idea were given some consideration? The two countries are joined at the hip in several critical areas: the culture business — a big export earner — and financial services, in which the New York-London axis dominates global trade.

America has been creaming off top British minds for ages across a wide range of industries, including Sir Jonathan Ive, chief designer at Apple. American law enforcement agencies have become very familiar with British banks, as the recent prosecution of HSBC for money laundering drug profits revealed. As for the military, everyone knows that where American forces march, so do the Brits.

In John le Carre novels, British spies refer to their American counterparts as "the cousins." I think the relationship is deeper now than it was during the Cold War.

So a final prediction: Sometime before I die, the idea of Britain joining America as the 51st state will be seriously discussed. It just won't happen in 2013.