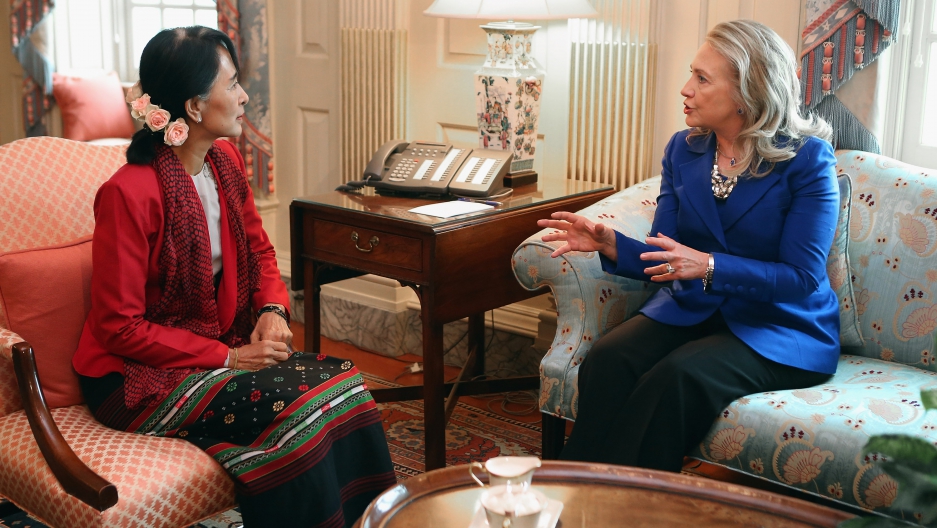 US Secretary of State Hillary Clinton meets with Nobel Peace Prize winner and Myanmar pro-democracy opposition leader Aung San Suu Kyi in Clinton's office at the State Department, Sept. 18, 2012 in Washington, DC. Having spend most of the last two decades as a political prisoner under house arrest in her home nation of Myanmar, formerly known as Burma, Suu Kyi was elected to parliament in 2012 and her political party, the National League for Democracy, won a majority of seats.
Credit: Chip Somodevilla
Share

It wasn't all bad, and it certainly wasn't all good, but 2012 was a big year for news makers and game changers.

From the man who won one of the tightest US presidential races in decades, to the head of state whose tenure has been marked by bloody protests, we've rounded up the nine leaders who influenced the world the most this year — for better or for worse.

The first woman to head the International Monetary Fund, Lagarde had no time to settle in before jumping into the ongoing battle that is the euro zone's debt crisis. Ranked among Forbes' most powerful people and most powerful women, the director of the 188-country-strong financial organization managed to garner an extra $430 billion in funding from G20 countries this past April, doubling the IMF's lending capacities.

In the midst of trying to put out global fiscal fires, the former lawyer and influential French politician — who was named a Chevalier in the Légion d'honneur in 2000 — also manages to raise two sons.

President Obama won another four-year term, by a long shot, in what was nevertheless one of the tightest, toughest US election races in years. He also remained surefooted in his decision-making, despite the Romney campaign's fierce attempts to paint him as a failed leader.

"Obama, 50, showed great skill as a Commander in Chief, sending the Navy SEALs to take out Osama bin Laden and supervising an orderly departure from Iraq," wrote Time magazine's Joe Klein. "But most of all, in the roil of a difficult time, he seemed smart and steady, trustworthy. Monuments are not often built to politicians who are merely trustworthy, but they do tend to win re-election."

Time just this week named Obama its "Person of the Year."

Washington Monthly also managed to round up 50 of Obama's accomplishments ... that's more than we can say for most leaders.

Imran Khan has made the jump from cricketer to activist-politician look seamless. Now the head of Pakistan's Tehrik-e-Insaf (PTI) party, Khan has become the face of the anti-drone movement in his home country. Though data on drone-related deaths is scarce, the Bureau of Investigative Journalism estimates drones — key tools of US military strategy in the region — have caused between 474 to 884 civilian deaths since 2004, including the killings of 176 children.

Khan refuses to stand for the continued use of drones in Pakistan, leading a high-profile march by over 1,000 people in October. He continues to speak out against the violence, and his anti-drone push is a central part of his campaign for president.

More from GlobalPost: Imran Khan interrogated by US immigration over drone stance

Touted as the most traveled secretary of state (though it depends on how you're counting, the Christian Science Monitor pointed out), Clinton has certainly clocked her fair share of overseas visits — to at least 111 countries, at last count — and dealt with a veritable bevy of international crises during her years in office.

From the ongoing bloody war in Syria, to the Sept. 11 attack on the US consulate in Benghazi, to the eight-day conflict between Gaza and Israel, Clinton has risen to some thorny challenges. She also managed to earn meme notoriety (Texts from Hillary, anyone?) and reach her 10th year as Gallup poll’s most admired woman.

And no matter what her mileage, she's definitely winning in the "most requests to run for President in 2016" contest.

More from GlobalPost: Nancy Pelosi joins the list of political figures to back Hillary Clinton in 2016

The new supreme leader of North Korea, aka the son of Kim Jong Il, has had quite the year in the spotlight for the head of such a reclusive state. For one thing, there was his marriage to Ri Sol Ju. Then there were all the rocket launches, mostly failed, and the ensuing international hoopla. And of course, that's not even counting the Onion nomination as "Sexiest Person of the Year" — which was taken amazingly seriously by Chinese and South Korean media.

Not too shabby for his first year in the hot seat.

Aung San Suu Kyi won the Nobel Peace Prize in 1991 for her brave activism against widespread slaughter of protesters fighting the oppressive rule of Myanmar's dictator U Ne Win. This year, however, marked a big shift for Suu Kyi and her political party, the National League for Democracy: The party won a majority of seats in parliamentary elections.

Suu Kyi also received accolades in the US for her work, accepting the Congressional Gold Medal — Congress's highest award for civilians — and the Atlantic Council's Global Citizen Award.

We can only wonder what 2013 will bring.

More from GlobalPost: Aung San Suu Kyi, Myanmar opposition leader, in the US for talks with Clinton, award from Congress (VIDEO)

The jury is still out — quite literally — on Egypt's first democratically elected leader since the ousting of Hosni Mubarak. Though he made an impressive showing after elections, he reignited furious protests in Cairo when he issued a controversial decree placing himself above the powers of the judiciary. There were also accusations that he had his opponents captured, detained, and beaten, according to The New York Times.

He also, however, proved to be a skilled political broker in the Middle East, producing a peace deal between Israel and Gaza after the two sides saw their bloodiest conflict in years.

As Egypt prepares to vote on a new constitution, which itself has sparked considerable protest and opposition, Morsi is certainly not stepping out of the limelight any time soon.

Chavez added another six-year term to his almost 14 years as Venezuela's president in October, and continues to be one of Latin America's most-watched politicians. However, his battle with cancer has only gotten more intense, and for the first time, the powerful leader has considered the possibility he may need someone to carry his torch.

The future of Venezuela remains to be seen, but Chavez's mark on the country — and the world — has certainly been made.

This year, Syria's President Bashar al-Assad has been facing the greatest threat to his dictatorship since he took office in 2000, following his father's death. The embattled leader has been locked in one of the region's bloodiest clashes since the uprising against him began in March 2011. The world has stood divided over the conflict, which has left around 40,000 people dead. But the tide may be shifting. According to the Telegraph, even Russia, one of Assad's staunchest allies, has admitted that his rule may be waning.

The president has denied ordering violence of any kind against Syrians, saying only a "crazy person" would kill his own people, BBC News reported.

"There was no command, to kill or to be brutal," Assad said. "I don't own them, I am president, I don't own the country so they are not my forces."

The battle against Assad continues to rage on as 2012 comes to a close.

More from GlobalPost: Series: Inside Syria