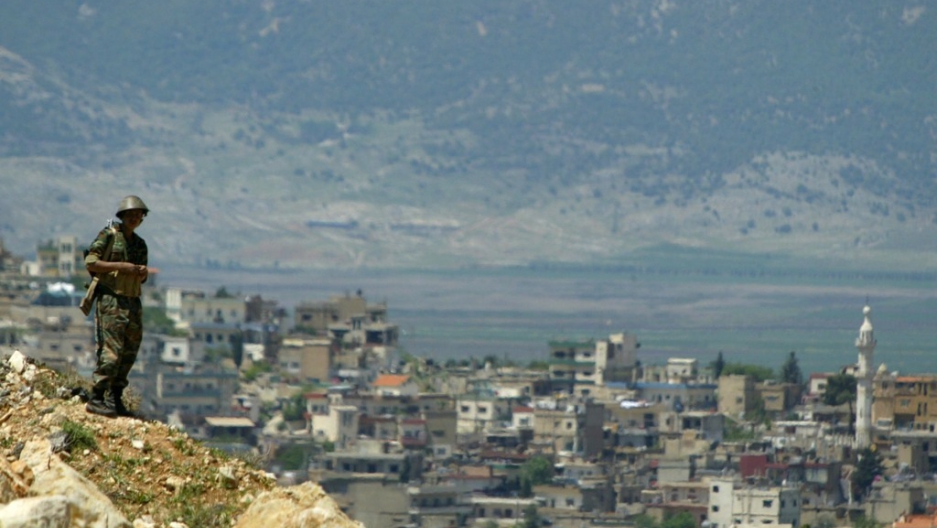 A lone Syrian soldier stands on a hill on the Syrian-Lebanese border. The town of Majdel-Anjar appears in the background.
Credit: Patrick Baz
Share

BEKAA VALLEY, Lebanon ― Less than a mile from the main border crossing between Lebanon and Syria, the steady thud of exploding shells can be heard day and night.

As the struggle for Damascus intensifies, control of Lebanon's porous border with Syria is a priority for both the Syrian regime and the rebels seeking its overthrow. Damascus, after all, is a mere 15 miles from the frontier, and only 50 miles from Beirut.

Critical battlefield tactics are driving the fighting here. The border area is "the backyard of the Syrian capital," explained Elias Hanna, a retired Lebanese military officer. And it's a key supply route for rebels. Preventing Damascus from being encircled, Hanna said, is essential to the regime's survival.

But the clashes risk a dangerous escalation due to a broader geopolitical matter: Hezbollah, the Lebanese Shiite group loyal to the Assad regime in Damascus, has stopped the movement of mostly Sunni Syrian fighters in some areas along the border. The group has recently beefed up its armed presence in Shiite villages on both sides.

On the Syrian side, President Bashar al-Assad has stepped up troop presence along the border in recent weeks to block weapons and fighters moving toward the capital. Exhausted and overstretched, however, the Syrian army will have a hard time sustaining such an operation, experts say.

The Lebanese-Syrian borderlands of the Bekaa Valley have a storied reputation as a lawless haven for smugglers, weapons dealers and hashish farmers. Close tribal and familial ties, and decades of unhindered passage, had until recently rendered the official border all but meaningless. Aside from checkpoints on the main north-south highway through the valley, the Lebanese army, an unofficial ally of the Syrian regime, is largely absent from the area.

Clashes here have become so common they often spill over into Lebanon itself. The Syrian army has killed dozens of Lebanese civilians during cross-border incursions. Sectarian tensions frequently spark deadly clashes between pro- and anti-regime parties in Lebanese cities and villages. Hundreds have been killed and injured so far this year.

Divisions within Lebanon over the war in Syria have generally fallen along the same sectarian lines that plague its neighbor. The largely Sunni uprising in Syria has emboldened a disenfranchised segment of the Sunni population here. Meanwhile many Shiites and Hezbollah, the dominant military and political force in Lebanon, have stood by Assad, whose minority Alawite sect claims roots in Shiite Islam.

Lebanese fighters have joined both sides of the war in Syria. The government of Lebanon also reflects those divisions, with top leadership positions split proportionally among various religious sects.

Lebanese and Syrian smugglers, who deliver everything from cooking oil to ammunition for rebel fighters, complain there are more snipers, patrols and land mines along the border than ever before. Syrian helicopter gunships have become a frequent sight in the skies above the mountains on the Bekaa Valley's eastern edge.

Analysts and local smugglers expect the fighting along the border to escalate further in the coming months, as the opposition pressures the Syrian capital.

For now, the Syrian military appears to have the advantage here. The official demarcation between the two countries' nearly 225-mile border is murky at best, giving the Assad regime the ability to pursue rebels and smugglers into disputed areas.

An 18-year-old Syrian smuggler named Abdullah said he crosses several times a week and spends his off days in the Lebanese village of Majdal Anjar.

"The journey takes much longer now than it used to," he said. He said the trip to the mountain town of Zabadani, a mere seven-mile crossing that once took only several hours, now takes several days.

Once inside Syria, smugglers say they buy off regime checkpoints for a day or two, allowing the flow of fighters and weapons to reach the capital free of interference.

"This is business and everyone has a price," said a middle-aged Lebanese smuggler from the Bekaa who asked not to be named. “The [Syrian] officers who take bribes also know that they are losing."

Just a mile inside Lebanese territory on the periphery of the Bekaa, Majdal Anjar has long been a base of support for Sunni militants and outlaws. Today it serves as a staging area for rebels and as a base for re-supplying fighters. Lebanese security forces hold no sway here.

Hezbollah, however, has no desire to see Sunni rebels establish a serious base inside Lebanon. The group has recently fought Sunni rebels in the northern Bekaa Valley.

Experts question how long the Syrian army will be able to fight along the Lebanese border. For a city like Damascus, of perhaps two million people, "you might need more than 100,000 troops to properly secure it," Hanna added. The regime "will find it very difficult to secure both the border and Damascus."

If Damascus falls to the rebels, simmering sectarian tensions in Lebanon's border areas could boil over. For a country that already fought a brutal 15-year civil war from 1975 to 1990, the thought of wider sectarian bloodletting is sobering.

About 40 miles north of Majdal Anjar, is Aarsal, another Lebanese town sympathetic to Syria's Sunni rebels. It is also a transit point for rebel fighters headed for the fighting around Damascus.

"All of Aarsal is with the revolution," said Ali al-Hujeiri, head of the town municipality. Illustrating his point, the flag and slogans of the Free Syrian Army are spray-painted on walls all across the mountain town.

Modified 4x4 pickup trucks, their beds and chassis reinforced with welded steel, make the perilous journey over the border mountain range every night. They are often filled with refugees on the return journey into Lebanon. Today, more than 10,000 Syrians who have fled the conflict are living in the town and the surrounding hillsides.

Several predominantly Shiite villages surround Aarsal, and hostilities have escalated as the number of refugees and rebels coming through the area increases.

"They attack our cars with rocks if we drive through their villages now," Hujeiri said. "We don't like each other."