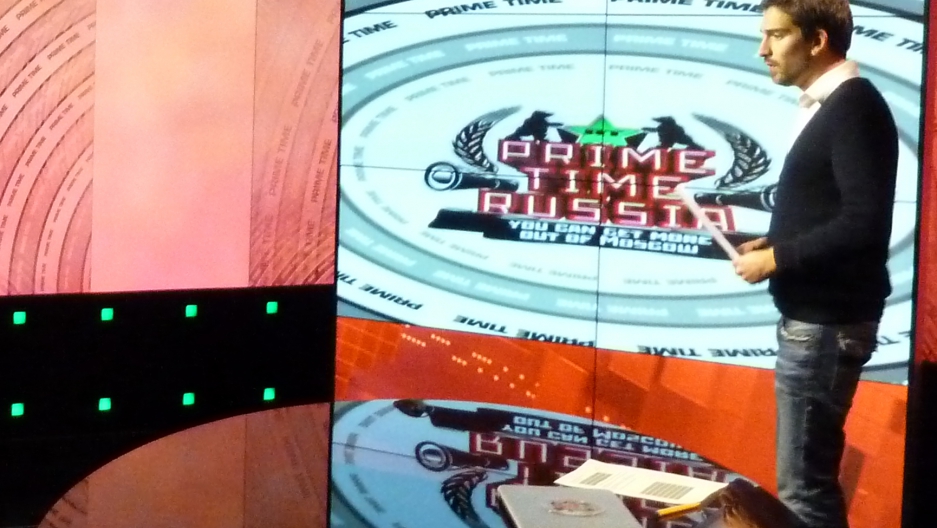 An RT presenter on a set in Moscow.
Credit: Jennifer Rankin
Share

MOSCOW, Russia — When a few hundred people first set up camp in New York's Zuccotti Park in September 2011 to protest “corporate greed” on Wall Street, only a handful of journalists showed up to report on them. Among the news organizations on the scene was RT, the Kremlin-backed English-language satellite channel formerly known as Russia Today.

Speaking to a reporter from Moscow, a news anchor was quick to set the tone for the station’s coverage of the Occupy Wall Street movement.

“Is this the start of an American Spring?” he inquired over footage of police tussling with protesters, alluding to the Arab Spring uprisings in the Middle East.

It was the kind of reporting that’s become a hallmark of the channel, enabling what was once derided as a state propaganda outlet aimed at improving Russia’s reputation to cultivate the image of an emerging English-language source for alternative views.

Occasional viewers often don’t realize the channel is a Russian government project, thanks partly to rebranding, heavy use of native English-speaking anchors and contributions from a new Washington bureau.

The Kremlin line is unmistakable nevertheless. Although RT left it to pundits to establish that America was becoming a police state, its reporters didn’t refrain from mixing similar opinions with their reporting.

On the first anniversary of the Occupy protests, reporter Anastasia Churkina said in a broadcast that “the political establishment and Wall Street are still sleeping in the same bed,” although “an actual democracy may be a little more possible with the seeds sown by Occupy.”

Russia scholar Stephen Cohen of New York University, an occasional guest on RT, believes the channel was deft to capitalize on the Occupy movement. “They were made for this story,” he says. “It’s a good one for the Kremlin because it shows the US is having problems [and] because the networks left it.”

Funded by an annual $33 million from the Russian government, Russia Today first aired in 2005 with a mission to provide what it characterized as a corrective to western reporting on international affairs.

It was seen as part of President Vladimir Putin’s drive to re-establish Moscow as a global power — fueled by the world’s largest energy reserves — by launching a prestige project that would compete with CNN and BBC World.

The channel soon gained a reputation for giving airtime to crackpot guests and conspiracy theories, such as “Why the 9/11 attacks were an inside job,” mixed with soporific features about Russian tourism.

Like other government-funded international channels such as Al-Jazeera English and China's CCTV, however, Russia Today has expanded far beyond its modest beginnings. It adopted its more anonymous name and opened its Washington studios in 2010 to run a dedicated American service, and soon added broadcasts in Spanish and Arabic.

RT America airs a mix of news and talk shows during prime time, with roughly four-fifths of its content devoted to American domestic affairs.

On a program called “Breaking the Set,” host Abby Martin delivers scalding reviews of US “corporate media.” The opening credits show her dressed in high heels and a cocktail dress swinging a sledgehammer into a TV set playing CNN.

“F*** the media, f*** the candidates, f*** the corporatocracy!” she said at the beginning of a show before the presidential election in November. “I can't wait for this f***ing election to be over!”

On “Capital Account,” Lauren Lyster, another well-dressed female host, strikes a breezier tone in interviews with talking-heads about the economy. On another show, host Max Keiser delivers hyperbole-fueled rants against “banksters” and other evils of the financial system. He recently declared the US dollar to be the “Devil's currency.”

RT's 32-year-old editor-in-chief Margarita Simonyan defends such hyperbole as part of her channel’s drive to be “the alternative to the mainstream media.”

Speaking in an interview in her central Moscow office, she says RT sees its mission as presenting news and opinions others don’t. “Ninety percent of our viewers say, ‘I’ve never seen this story,’” she says. “’Why do I have to tune into Russian television for stories about my own country I wouldn’t see otherwise?’”

Simonyan says her channel devoted far more resources to covering recent opposition protests in Russia than Occupy Wall Street, and that RT America accounts for only 10 percent of the entire RT budget.

However, the station’s detractors say it lavishes attention on American problems while sugarcoating dissent in Russia. In one example, a broadcast the day after Russia's parliamentary elections last year reported on a “huge rally” that took place in central Moscow.

The correspondent said the protesters were angry “with how these elections have been run,” without otherwise mentioning widespread allegations of massive fraud that were causing a sensation on the Russian internet and reported in other media.

A former Kremlin pool reporter for domestic state television who was hired to run Russia Today at the age of 25, Simonyan dismisses accusations of propaganda. “We don't argue, we just tell [our critics] to watch it.”

Three students at Columbia University School of Journalism did just that. After studying the channel's output for several weeks in early 2011, they gave the channel one out of five points for credibility. RT's reporting on Russia was “pure fluff” while its news on the United States showed “a consistent anti-American sentiment,” they said.

Ann Cooper, a former NPR Moscow correspondent who teaches broadcast journalism at Columbia, agrees with her students' verdict. “Some of the reporting was fine,” she said, “but as soon as you got onto the subject of America, there was definitely an agenda. There’s a very snarky message about what is happening in the US.”

“I’m just not sure who’s watching it and why,” she added.

More from GlobalPost: Is Russia preparing for an endgame in Syria?

She’s not alone. RT's American audience, like that of other foreign cable stations, is too small to be measured, according to a press official at Nielsen, the company that measures TV ratings in the United States.

Although RT declares itself to be the most popular foreign cable channel in five US cities, it declined to release the data behind its claim.

Clearly some people are watching, however. The channel is the most popular news organization on YouTube, according to the Pew Research Center — although most “RT” videos are derived from other sources.

“They do some high-quality stuff, they do some mediocre stuff and they do some lousy stuff, but so does every other cable channel,” Cohen says. “People are intelligent and can make up their own minds.”