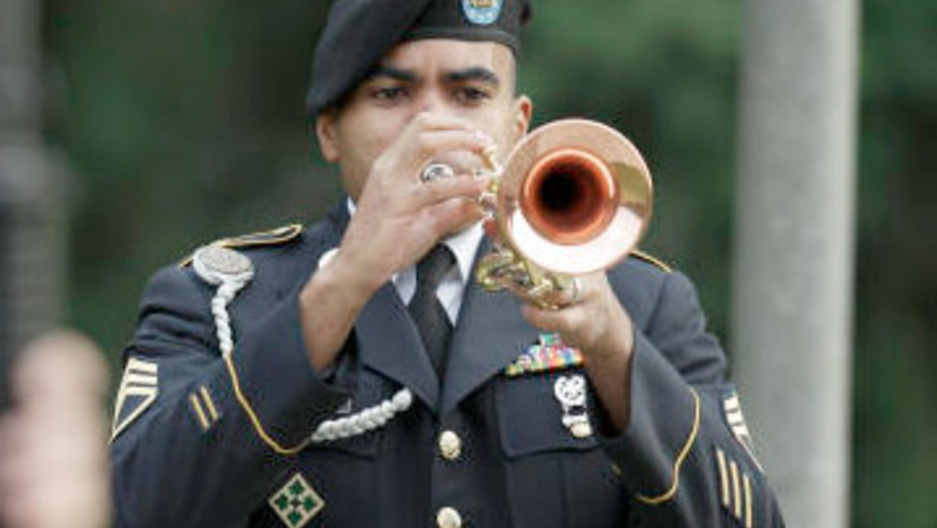 A member of the Army I Corps band plays "Taps" at a memorial service for U.S. Army Spc. Brittany Gordon, Wednesday, Nov. 14, 2012, at Joint Base Lewis McChord, Wash. Gordon was killed in Afghanistan by a suicide bomber.

Share
The epidemic of suicide in the US military corresponds with the US involvement in parallel wars in Afghanistan and Iraq. But the latest figures confirm a confusing fact: Most soldiers who kill themselves have never deployed to a combat zone, and the vast majority have never been in battle at all. Frontline reporter Sarah Childress examines what's behind the statistic. The stereotype of the soldier who kills himself–a combat veteran plagued by post-traumatic stress -– is a familiar one to Craig Bryan, the associate director of the National Center of Veterans' Studies at the University of Utah. "That is the storyline that we have created in our society because it's a simple storyline and it intuitively makes sense," he says. "The problem is that the data doesn't support the notion that it is as simple as combat leads directly to suicide risk." Last year, 53 percent of service members who killed themselves had no history of deployment, according to the Defense Department's most recent data. And about 85 percent of military members who took their lives had no direct combat history, meaning they may have been deployed but not seen action. Suicide is complex, so there's no simple explanation for why these service members are killing themselves in greater numbers. But experts who have studied the problem say that one factor may be the pressure from the back-to-back wars in Afghanistan and Iraq. "Life in the military these days is stressful, whether you're in a combat zone or not," says Bryan. "We're increasingly asking our military personnel to do more with less … And even when you're here in the United States, even if you're not in a combat zone, things aren't necessarily easy." Bryan has nearly completed a three-year study of the root causes of suicide in the military. He says stress levels across the military began rising in 2004, as did the suicide rate–even among those who hadn't deployed to Iraq or Afghanistan. "In recent years the number who suicide without ever having deployed has actually increased," according to Dr. Elspeth Ritchie, formerly the top psychiatrist at the Army Surgeon General's office, and currently chief medical officer for the District of Columbia's mental health department. "The issues are complex, but one of the things that's clear is that it's not just about an individuals' deployment history. Dr. Ritchie's research has found another risk factor often overlooked is the history of that soldier's unit–even if the soldier is a new recruit. "It's the unit's deployment history that is very important, in that if a unit has deployed time and time again, they might not have time to take care of new soldiers, to nurture the new soldiers, and to do the other bonding and strengthening events that they used to do, which may lead an individual soldier who's feeling more lost and left out to suicide," Ritchie says. Kim Ruocco, who directs suicide outreach at the nonprofit Tragedy Assistance Program for Survivors, or TAPS, said this is a sadly familiar story. She worked with the family of a young man in the Navy who took his life. He had injured his knee in basic training, and still hadn't fully healed after multiple surgeries. His unit deployed without him. "He then went to roll call day after day in the morning, and then they stopped calling his name. And so he stopped going to roll call," she said. "And started to feel like he didn't belong, at all. That he wasn't part of the unit, that he wasn't needed, he wasn't valued, that there was no purpose for him and he was never going to heal." Then, Ruocco says, he faced another setback, getting in trouble for skipping roll call. "His peers called him and said you know, you're really in trouble, and he killed himself before they could get over and charge him with anything. He had been in the military for only two years but had struggled all the way from basic training." Ruocco says military culture is highly resistant to mental health counseling, because service members are trained to be tough, to handle their own problems. That can compound the stigma for those who haven't deployed to a war zone, but need help. The military says it's trying to change that. It's held training sessions on suicide prevention for service members and introduced screening for depression at routine physicals. The Army also launched a $50 million study of mental health in 2009 – the largest it has ever done – to better understand the risks and factors that lead to military suicides. It's due to be completed in 2014.