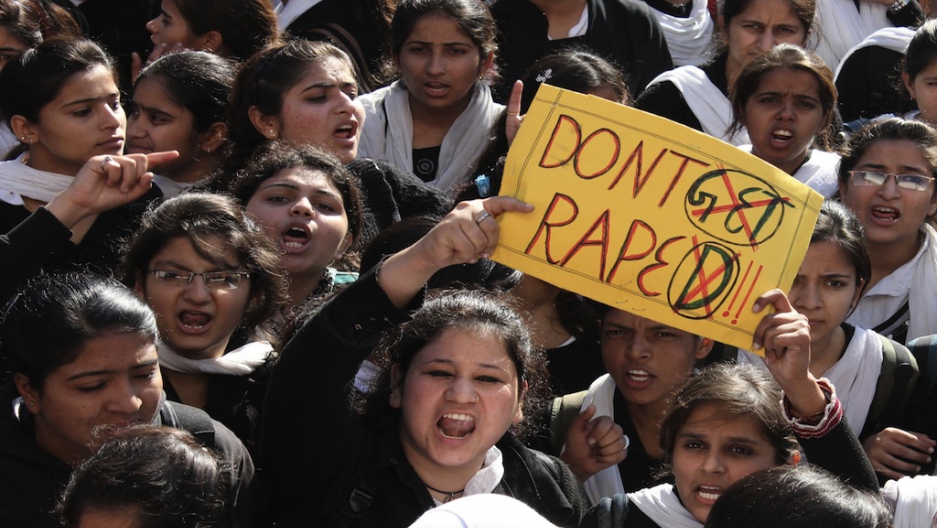 Indian students shout slogans as they wave a placard during a demonstration in Jammu on December 20, 2012, as they protest the rape of a young woman in the Indian capital. Riot police fired water cannon on December 19, at a protest in New Delhi over the gang-rape of a 23-year-old student who was left fighting for her life as outrage against the brutal attack grew across India.
Credit: STRDEL
Share

After a women was raped and nearly beaten to death by six men in a bus last week, calls for harsher penalties for rape rang out across India. Protests and demonstrations against a rampant "rape culture" erupted, and the press has talked of little else, especially after lawmakers agreed to fast track the trial and crack down on rapists.

The victim, a 23-year-old traveling with a male friend, was assaulted on a bus Sunday as the couple was on their way home. The friend was allegedly beaten with an iron rod while the bus driver and his friends repeatedly raped the woman for hours. She was taken to the hospital in critical condition and remains there in stable condition.

The suspects appeared in court yesterday, and one admitted to beating the victim's friend, saying, "I have committed a horrible crime. I had beaten up the boy. I should be hanged," according to the Times of India.

The case has shocked the nation and outrage continued across the country throughout the week to the point that police dispersed angry protesters with water cannons.

Sexual violence, long a taboo subject in India, has only relatively recently become a mainstream issue with activists who hope to draw attention to widespread sex crimes.

Promises from the police commissioner, the Delhi Chief Minister, and even the Home Secretary to fast track the trials, commission reports and set up task forces to focus on safety have echoed through the streets of Delhi. But residents have heard that tune before.

More from GlobalPost: India confronts its own brazen and spectacular violence

In 2010, after the gang rape of a call center employee, similar promises were made, "but nothing much has changed on the ground. Delhi has been witnessing a rise in crime against women," reports the Deccan Herald, a local paper.

Just looking through the search portal of the Times of India's website for the term "rape" returns a myriad of results, with stories reporting rapes of women of varied ages and in every possible corner of the country.

Since Sunday's incident, at least five gang rapes have been reported in Uttar Pradesh, Rae Bareli, Rampur, Sonbhadra and Farrukhabad. And even with the whole country up in arms about rape, the Uttar Pradesh incident almost went unreported because police wouldn't levy rape charges, and instead put the situation down as a molestation and theft, reports the Times of India.

The AP reported yesterday that police found the body of a 10-year-old girl who had been gang-raped and killed, while a 14-year-old was in critical condition after being raped by four men.

India is one of the worst places in the world to be a woman, according to a global survey by the Thompson Reuters Foundation that profiled a number of countries and compared maternal health, rape statistics, and answers to topics such as domestic violence.

Times of India blogger, editor and columnist Anand Soondas laid it out in a post Wednesday called "Why Indian Men Rape."

"Strange theories are floated to explain the depravity of Indian men...but the truth is that at the root of it all lies a culture built around hierarchies, of gender, faith, colour, caste, region. We are, quite simply, not used to people being equal."

Soondas points out that rape is rare in areas of India that no longer have dowry systems, and do not put a monetary amount of value on women.

"In India, women and girls continue to be sold as chattels, married off as young as 10, burned alive as a result of dowry-related disputes and young girls exploited and abused as domestic slave labour," said Gulshun Rehman, health program advisor at Save the Children UK, who was one of those polled for the Trust Law survey, to the Guardian.

These backwards attitudes about women contribute to a culture of violence and misogyny, despite India billing itself as the world's largest democracy. Women still don't have rights, but they are fighting for them.

Activism has taken off in the cities, and SlutWalks, protests, and demonstrations are regular occurances, even if they aren't widely accepted or acknowledged.

For a deeper look at the lives of modern women in medieval India, check out this wonderful investigation by the Guardian's Helen Pidd, who looked at a number of factors contributing to the culture of violence against women.