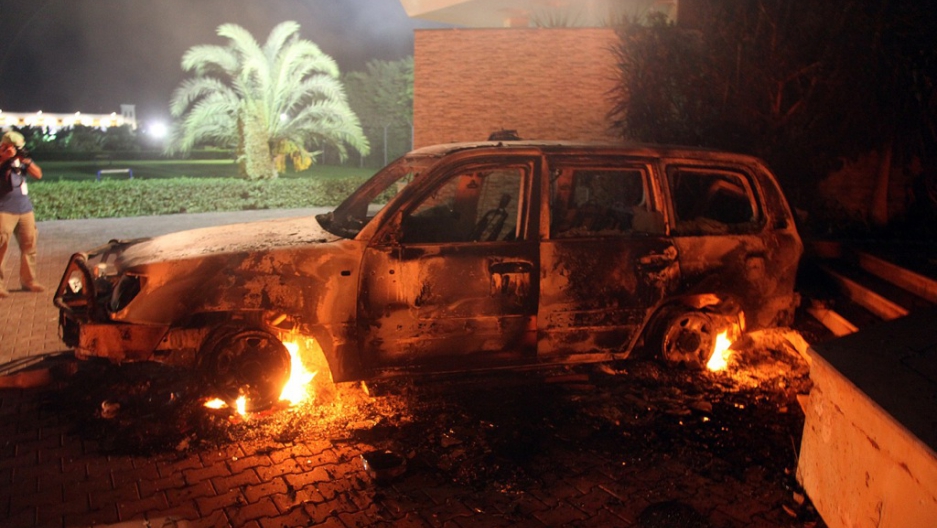 A vehicle sits smoldering in flames after being set on fire inside the US consulate compound in Benghazi late on September 11, 2012.
Credit: STR
Share

US Secretary of State Hillary Clinton's Accountability Review Board has released its report on the Sept. 11 attacks on the US consulate in Benghazi that killed four Americans, including Ambassador to Libya Chris Stevens.

The board, chaired by retired Ambassador Thomas R. Pickering and vice-chaired by former Joint Chiefs Chairman Michael Mullen, found that State Dept. security systems fell short of providing the protection needed for the US mission.

An 39-page unclassified version of the report was published on the State Dept.'s website. GlobalPost took a closer look to find its key points:

The report stressed that part of the problem with security concerns in high risk areas like Benghazi was a lack of funding and resources.

“One overall conclusion in this report is that Congress must do its part to ...provide necessary resources to the State Department to address security risks and meet mission imperatives.”

Initial reports of the attack had suggested that protests against an anti-Islam film were to blame for the consulate attack. But the board dismissed those accounts:

“Responsibility for the tragic loss of life, injuries, and damage to U.S. facilities and property rests solely and completely with the terrorists who perpetrated the attacks. The Board concluded that there was no protest prior to the attacks, which were unanticipated in their scale and intensity.”

The report was unflinching in its criticism of the State Dept., but The National Journal pointed out that the report failed to hold the highest levels of the Obama administration to account.

“Systemic failures and leadership and management deficiencies at senior levels within two bureaus of the State Department (the “Department”) resulted in a Special Mission security posture that was inadequate for Benghazi and grossly inadequate to deal with the attack that took place.”

It also stressed that there were few warnings or intelligence reports hinting at any sort of attack on the Benghazi consulate:

“The Ambassador did not see a direct threat of an attack of this nature and scale on the U.S. Mission in the overall negative trendline of security incidents from spring to summer 2012. His status as the leading U.S. government advocate on Libya policy, and his expertise on Benghazi in particular, caused Washington to give unusual deference to his judgments.”

“The Board found the Libyan government’s response to be profoundly lacking on the night of the attacks, reflecting both weak capacity and near absence of central government influence and control in Benghazi.”

Though four State Dept. officials have resigned over the report, the report did not accuse any government employee of breach of duty.

“The Board found that certain senior State Department officials within two bureaus demonstrated a lack of proactive leadership and management ability in their responses to security concerns posed by Special Mission Benghazi, given the deteriorating threat environment and the lack of reliable host government protection. However, the Board did not find reasonable cause to determine that any individual U.S. government employee breached his or her duty.”

A consistent concern in Libya has been the central government's weak hold on power in the eastern regions of Libya, with powerful militias filling in the security gaps. In September, the president issued an ultimatum for militias to either disband or fall in line with the government.

“At the time of the September attacks, Benghazi remained a lawless town nominally controlled by the Supreme Security Council (SSC) – a coalition of militia elements loosely cobbled into a single force to provide interim security – but in reality run by a diverse group of local Islamist militias, each of whose strength ebbed and flowed depending on the ever-shifting alliances and loyalties of various members.”

Despite Libya being liberated, Benghazi was not a safe place, and the report seems to stress that the State Dept. did not adequately take that into account when staffing its post in Benghazi.

“The United States must be self-reliant and enterprising in developing alternate security platforms, profiles, and staffing footprints to address [the realities of high risk, high threat areas].”

In other words, don't rely on the Libyan government, which is still seen as weak on security.

However, both these recommendations seem to stress the need for more people who speak the local language, to ease communication with the locals and lessen confusion in crisis situations.

“With increased and more complex diplomatic activities in the Middle East, the Department should enhance its ongoing efforts to significantly upgrade its language capacity, especially Arabic, among American employees…”

The report seems to have stressed fire safety as an issue that cropped up after the attack, calling on employees to be trained in the case of fire.

“The Secretary should require an action plan from DS, OBO and other relevant offices on the use of fire as a weapon against diplomatic facilities, including immediate steps to deal with urgent issues.”

And it included a general note of caution about relying too heavily on intelligence:

“Post-2001, intelligence collection has expanded exponentially, but the Benghazi attacks are a stark reminder that we cannot over-rely on the certainty or even likelihood of warning intelligence.”