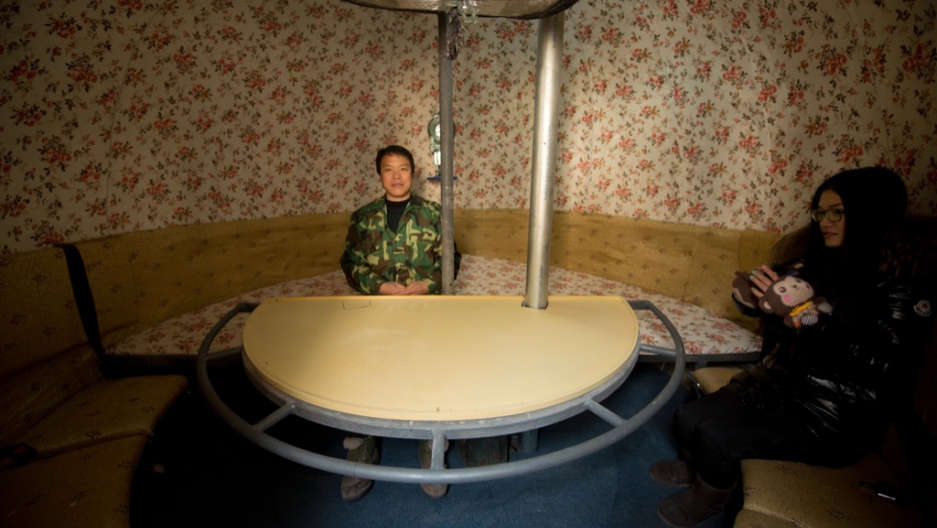 Farmer Liu Qiyuan (C) and his daughter sit inside one of seven survival pods that he has also dubbed 'Noah's Arc', in a yard at his home in the village of Qiantun, Hebei province, south of Beijing on December 11, 2012. Inspired by the apocalyptic Hollywood movie '2012' and the 2004 Asian tsunami, Liu hopes that his creations consisting of a fibreglass shell around a steel frame will be adopted by government departments and international organisations for use in the event of tsunamis and earthquakes.
Credit: Ed Jones
Share

Want to survive the apocalypse? Well, you're going to need a fallout shelter. There's just no better solution on the market when it comes to hiding from mutants, Mayan death beasts, and the undead (and yes, nuclear fallout).

Here are some wonderful options and instructions for your very own home-away-from-unspeakable-horror.

Remember the Cold War? OK, maybe you don't. But that was a time when Americans, many of them otherwise perfectly rational, were doing things like digging fallout shelters into the basements of their pastel-colored tract houses. Because it was actually eminently possible that the Nuclear Death would be upon us if a diplomat spilled champagne on the wrong important personage.

The 1950s and 1960s treated this reality rather matter-of-factly, and the government produced pamphlets and videos instructing the population on the harsh reality of post-nuclear-hell survival.

Everyone was well-dressed in these videos, and the women were still made-up and in heels, so I suppose things were assumed to not be that bad in the wake of nuclear disaster — indeed, what kind of lady would leave her heels behind when attempting to out-run imminent death?

This remarkably calmly-produced video explains how to survive in a fallout shelter, covering everything from eating, to drinking, to using Geiger counters to monitor just how bad it was outside. One thing was clear: those who built their own private fallout shelters were going to have a nicer time than those contending with the scraping, crazed masses in public shelters. Just a helpful hint.

Want to get your family up to speed on apocalypse survival? Survival Center provides a home-study course on "Basic Preparedness." We're assuming there is a chapter on zombies, maybe two.

Or you could also play the Fallout video-games. Those are basically documentaries.

2. SAY, I WANT A FALLOUT SHELTER OF MY VERY OWN! WHERE DO I LOOK?

You don't have to dig your own. Safecastle.com provides attractive pre-fabricated Fallout Shelters made of 7/16-inch thick steel, outfitted with hatch doors and air and water filtration systems. Shelters start at a mere $23,155, plus a $3,730 installation fee. What price escaping the zombie apocalypse, right?

Also: "Note that we can also weld two or more shelters together, creating a more spacious environment in anticipation of a prolonged stay underground."

Always anticipate a prolonged stay underground. Those resurrected Mayan death-beasts aren't going to just peace out in three days, you know. Be realistic.

The Survival Center will also come and install your very own fallout shelter for you, supposedly the "best on the civilian market."

Even better? The Survival Center crack team specializes in speedy "stealth" installation, so you can escape the detection of "nosy neighbors." After all, you don't want the Smiths' next door frantically demanding to be let into your triple-reinforced survival pod when the end-times come, do you? Some people are just lousy at thinking ahead.

So many choices. Thankfully, American Bomb Shelter provides somewhat terrifyingly extensive support for your fallout shelter's air filtration, water, and blast door needs. Just throw some shag carpet in that sucker and you're ready to while away the decades, fighting mutants.

Decorating fallout shelters became something of an art form back in the 1960s, when even the stylish were reconciled to the idea of lurking underground in the event of nuclear terror. The Associated Press reports that, according to author Susan Roy, around 200,000 shelters had been built by 1965 — though it's hard to know exactly how many. (Think of the Smiths next door! Keep it secret.)

The American Institution of Decorators followed the Civil Defense Agency's lead and created a number of fanciful fallout shelter test designs: One even included a swimming pool. All were meant to be vaguely reminiscent of more normal times on the surface — if they were ever to return.

Want to build your own fallout shelter? Good idea — the kids love that sort of thing. Here's some pleasingly homey video providing instructions. Imagine all the fun you'll have, plunking away at your banjo with the family gathered around in your fallout shelter, while unimaginable existential horror roams the scoured and bleeding face of the Earth.

5. YOUR FALLOUT SHELTER IS YOUR PALACE!

That's considerably nicer than most starter apartments, and it's still buried 20 feet underground. You could also just use it as a very, very quiet "man-cave." It all sells for about $59,900, according to the video.

Some fallout shelters have become famous over the years — models of the form, you might say.

A recent entrant into the design field? Chinese farmer-turned-businessmen Liu Qiyuan, who invented bright yellow "Noah's Ark" apocalypse escape pods. Useful for tsunamis, tornadoes — and nuclear attack in a pinch — the fiberglass and steel pods retail for a mere $48,000, and come with seatbelts, a dining area, and even "flowery wallpaper" on the more flash models, according to AFP. It's not quite too late to get your own!

Texas businessman Jay Swayze was commissioned to build a fallout shelter for the town of Plainview in the 1960s, but decided that the average fallout shelter was too depressing — a real concern, as the denizens of your average fallout shelter are unlikely to be in a particularly cheery mood, anyway. He hit upon the "ship in a bottle" theory of fallout shelter building, wherein a standard home could be constructed safely underground, says the Associated Press. And he went ahead and did it.

In fact, Swayze lived in a ranch-style fallout shelter with his family, and sponsored research proving that "people did not look out of their windows 80 percent of the time, and of the 20 percent of the time they did, half the time what they saw was 'undesirable,''' according to author Lawrence R. Samuel.

And then, there's the Mount Dora Catacombs in central Florida — well, if they actually exist. Supposedly, this extensive network of shelters was built in the 1960s in this sleepy community to accommodate a group of worried families, who wanted to ensure their continuing survival after the Big One hit. The 5,000 square foot shelter, according to a 1991 Orlando Sentinel article, could house 25 families and theoretically contained enough food and fuel to allow the group to survive for 100 years. But would they want to?

However, no one knows exactly where the Catacombs are, and as a result, no one can actually verify they exist. Which may be entirely on purpose.