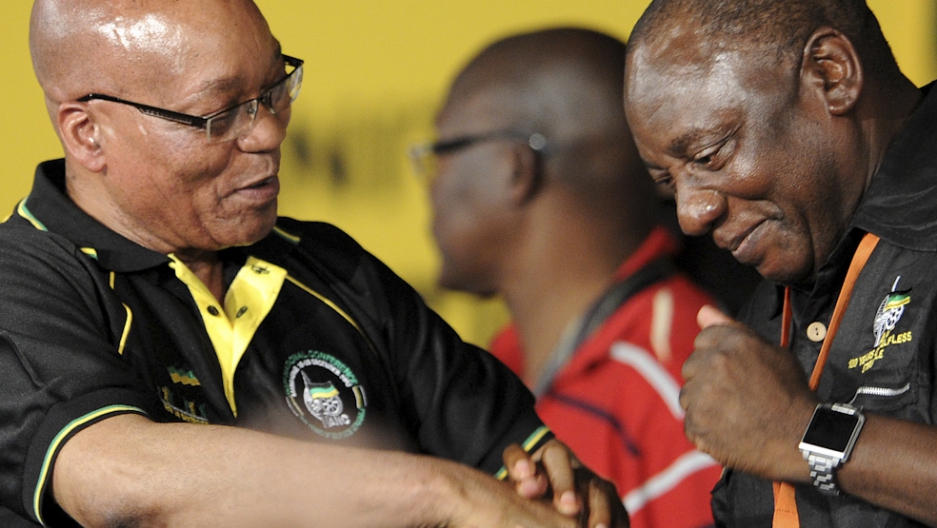 Jacob Zuma, president of South Africa and the newly re-elected African National Congress (ANC) president, congratulates businessman Cyril Ramaphosa for being elected deputy president of the party, setting him up to become Zuma's potential eventual successor, during the 53rd National Conference of the ANC on December 18, 2012 in Bloemfontein.
Credit: STEPHANE DE SAKUTIN
Share

BLOEMFONTEIN, South Africa — President Jacob Zuma was re-elected Tuesday as leader of the African National Congress, winning in a landslide victory over Kgalema Motlanthe, his deputy and only rival for the position.

Zuma received strong support at the five-yearly ANC elective conference, and is on track to remain at the helm of Africa’s largest economy until 2019, presuming the ANC takes its expected win during 2014 national elections.

Cyril Ramaphosa, a former trade union leader who became one of the country’s richest businessmen, was voted in as the ANC’s new deputy president, taking over from Motlanthe, who declined nominations for the job.

The voting results at the ANC convention, which is being held in the city of Bloemfontein (also called Mangaung), were a disappointment for the party's “Forces of Change” faction that had hoped to dislodge Zuma.

Zuma has faced criticism for his perceived lack of leadership and failure to make progress on some of the country’s most pressing problems, including widespread corruption and a dismal education system.

But the "Forces of Change" bloc found little support among some 4,000 voting delegates in Bloemfontein. Zuma won re-election with 2,986 votes to Motlanthe’s 999.

The ANC has held an unshakeable majority in South Africa since the first fully democratic elections in 1994.