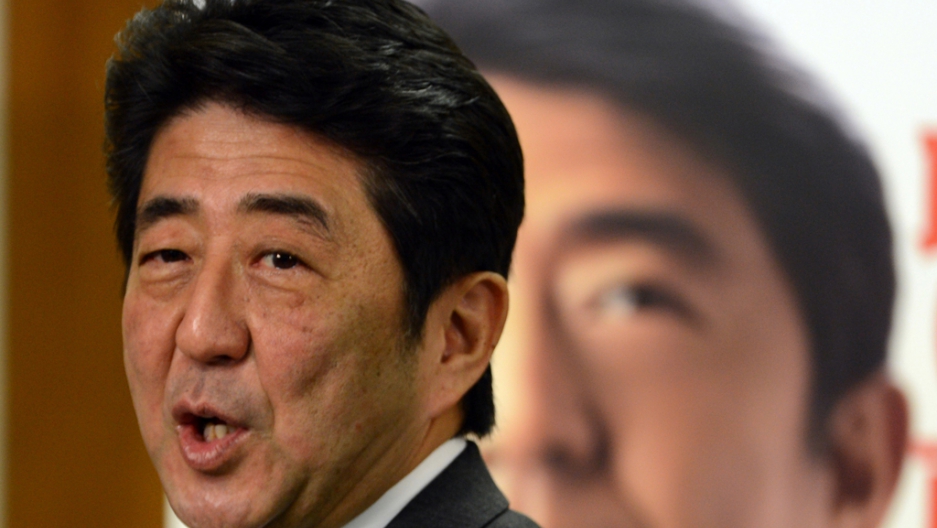 After his sweeping election victory, incoming Japanese prime minister Shinzo Abe said this week that there can be no compromise on the sovereignty of the Senkaku islands.
Credit: Yoshikazu Tsuno
Share

TOKYO, Japan — If the outcome of Sunday’s election in Japan was a disaster for the outgoing Democratic Party of Japan, it didn't offer much comfort, either, to leaders in China and South Korea. At a time of heightened regional tension, they are preparing for the arrival of a conservative administration in Tokyo.

The day after his Liberal Democratic Party (LDP) secured a comfortable majority, the prime minister-in-waiting, Shinzo Abe, repeated his position that sovereignty over the Senkaku islands, which are administered by Japan but also claimed by China, is not up for discussion.

He would govern, he said, “with a strong determination that there is no change in the fact that the Senkaku islands are our territory.”

While Chinese media warned of rising nationalist sentiment in Tokyo, the reaction from officials in Beijing was more muted. "We think the most pressing issue is that Japan must show sincerity and take practical steps to appropriately deal with the present situation, and to work hard to resolve the issue and improve relations between the two countries," said Hua Chunying, a Chinese foreign ministry spokeswoman.

The response was much the same in South Korea, with which Japan is embroiled in a longstanding, but less combustible, territorial dispute.

"Japan is in a position where it can jointly work with us for this region and the international community," foreign ministry spokesman Cho Tai-young said.

In the early stages of the campaign, Abe had rattled off a rightwing wish-list that included developing the Senkakus (a move certain to infuriate China), an increase in defense spending, and revisions to the war-renouncing clause in Japan’s postwar constitution.

His motivation is a desire to end what fellow conservatives call the national "masochism" of the past 60 years, during which the legacy of the war has prevented Japan from taking its rightful place as a “normal” nation, with the right and means to defend itself and its allies.

That same ideology has led Abe to claim (wrongly) that there is no evidence Japan used tens of thousands of mainly Korean women as sex slaves before and during the war, and to express regret that he did not visit Yasukuni — a Tokyo shrine dedicated to 2.5 million war dead, including 14 class-A war criminals — during his previous stint as prime minister, from 2006 to 2007.

Yet 48 hours after his Liberal Democratic Party’s dramatic comeback after three years in the political wilderness, the indications were that Beijing and Seoul may have less to fear from Abe than his campaign rhetoric suggests.

By restating Japan’s claims to the Senkakus, Abe was no different from his left-of-center predecessor, Yoshihiko Noda, who also raised doubts about wartime forced prostitution.

More importantly, Abe's post-victory comments indicate he is aware that Japanese voters have little appetite for regional confrontation and would prefer him to focus on the economy, which recently entered its fourth recession since 2000.

“This wasn’t a foreign policy election,” says Robert Dujarric, director of contemporary Asian studies at Temple University in Tokyo. “As in many countries, it was about the economy. Abe clearly has very hawkish instincts, but that said, you are not going to see more money for the military.

“It’s not clear that you will see a dramatically different foreign policy because the LDP is not united behind Abe’s hawkish stance. It’s a very broad church, and includes hawks and people you could almost describe as pacifists.”

There was more enthusiasm for Abe in the US, buoyed by the prospect of closer security ties and an ally willing to take more responsibility for its defense, while exercising caution in its dealing with China.

More from GlobalPost: Vice and vanity in Seoul

Abe began his previous term in office with visits Beijing and Seoul in an attempt to repair the damage inflicted by his predecessor, Junichiro Koizumi, who had made several visits to Yasukuni as prime minister.

Significantly, Abe’s first overseas trip this time will be to Washington, where US President Barack Obama yesterday described the bilateral relationship as the “cornerstone of peace and security in the region.”

Abe said: “I will aim to restore the Japan-US alliance and Japan's strong diplomatic capabilities." Japan, he added, "can't pursue a strong foreign policy without strengthening its alliance with the United States.”

But other analysts are not convinced that Abe will be able to resist pressure from Japan's emboldened rightwing to adopt a more confrontational approach to China and free the self-defense forces from its constitutional shackles.

Koichi Nakano, a political science professor at Sophia University in Tokyo, said the newly formed Japan Restoration Party, which campaigned on a far-right platform and won 54 seats, could be pivotal in pushing through constitutional reform, which requires a two-thirds majority in both houses and a majority in a national referendum.

The party, he said, had sent a message to Abe “that if you want to pursue your right-wing agenda, we are here for you.”