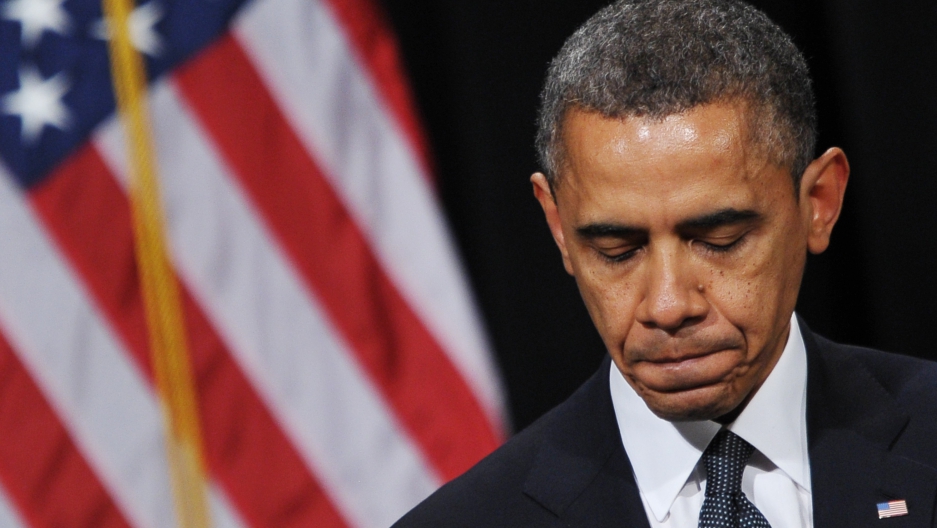 US President Barack Obama pauses as he speaks during a memorial service for the victims and relatives of the Sandy Hook Elementary School shooting on December 16, 2012 in Newtown, Connecticut.
Credit: Mandel Ngan
Share

President Barack Obama vowed on Sunday to "use whatever power this office holds" to stop massacres like that at the Sandy Hook Elementary school.

"These tragedies have got to end," Obama said in a speech delivered at a memorial service for the 27 victims, including 20 children held at the Newtown High School Connecticut on Sunday night.

He had earlier met privately with families of the victims and emergency personnel who responded to the deadly shootings Friday, Fox News reported.

"I am very mindful that words cannot match the depths of your sorrow. But whatever measure of comfort we can provide, we will provide. … Newtown, you are not alone."

Speaking for 18 minutes in words he mainly wrote — finishing only once on board Air Force One en route to Newtown, according to The New York Times — Obama alluded to the issue of gun violence in America while at the same time avoiding specific gun control.

Amid rising pressure to push for tighter regulation of guns, the Times wrote, Obama seemed to promise a significant change in direction — specifically mentioning the three other mass killings during his presidency: the shootings in Tucson, Arizona in January, 2011; Aurora, Colorado in July; and Oak Creek, Wisconsin in August.

"Surely, we can do better than this. We must change."

He added that America would be judged on the way it cared for its children.

"Can we say that we're truly doing enough to give all the children of this country the chance to live out their lives in happiness and with purpose? I've been reflecting on this in the last few days. And if we're honest with ourselves the answer's no. We're not doing enough and we will have to change."

Still he approached the matter cautiously, pointing to its complexity:

"No single law, no set of laws can eliminate evil from the world or prevent every senseless act of violence in our society."

Instead, Obama said, he would meet with law enforcers, parents, educators and others, Reuters reported.

The memorial service coincided with the release of new details about the leadup to the Sandy Hook Elementary School massacre that left mainly 6- and 7-year-olds dead.

The gunman, Adam Lanza, shot his mother multiple times in the head before traveling to the school armed with a Bushmaster AR 15 rifle and hundreds of bullets in high-capacity magazines of about 30 rounds each.

He also carried two handguns into the school and had a fourth weapon, a shotgun, in his car outside, Reuters wrote.

Gov. Dannel P. Malloy of Connecticut said Lanza shot himself as the police were closing in, and that he may have intended to kill more people.