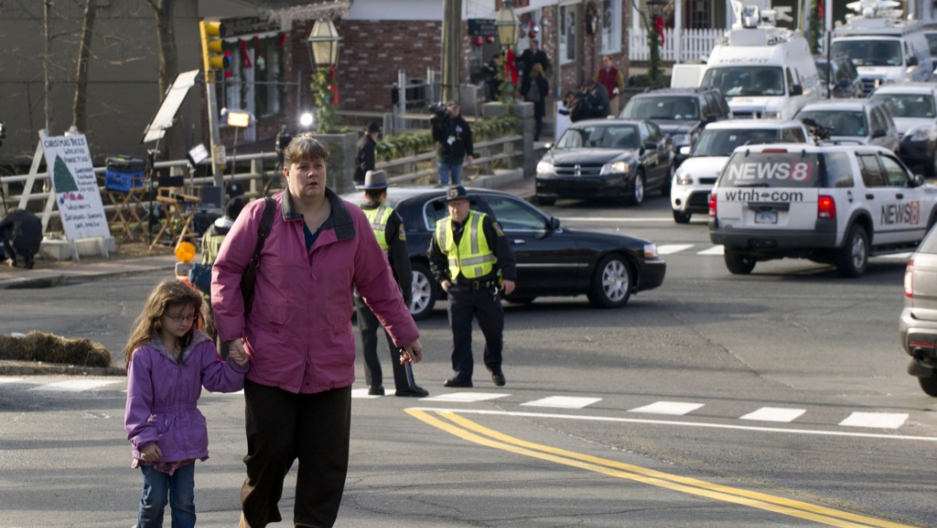 A woman walks a child toward the Sandy Hook Elementary School on December 15, 2012 in Newtown, Connecticut. The residents of an idyllic Connecticut town were reeling in horror from the massacre of 20 small children and six adults in one of the worst school shootings in US history.
Share

A brave six-year-old became the sole survivor of her first grade class at Sandy Hook Elementary School in Newtown, Conn. because she played dead as shooter Adam Lanza went on his rampage.

According to a pastor close to her family, the unnamed girl lay among the bodies of her 15 classmates until she thought it was safe to leave.

Pastor Jim Solomon told ABC News: "She ran out of the school building covered from head to toe with blood and the first thing she said to her mom was, 'Mommy, I'm OK but all my friends are dead."

"Somehow in that moment, by God's grace, [she] was able to act as she was already deceased."

"The mom told me, and I thought this was very insightful, that she was suffering from what she felt was survivor's guilt because so many of her friends no longer have their children but [her mom] has hers," the pastor said.

The Daily Mail said the girl was the first student to run out of the Sandy Hook Elementary School following the mass shooting, which left 20 children and 6 adults dead.

He continued, "How at 6 and a half years old can you be that smart, that brave? I think it's impossible outside of divine intervention. She has wisdom beyond her years."

Solomon said the girl's family was suffering survivor's guilt because many of their friends were not as lucky and had lost children in the tragedy.