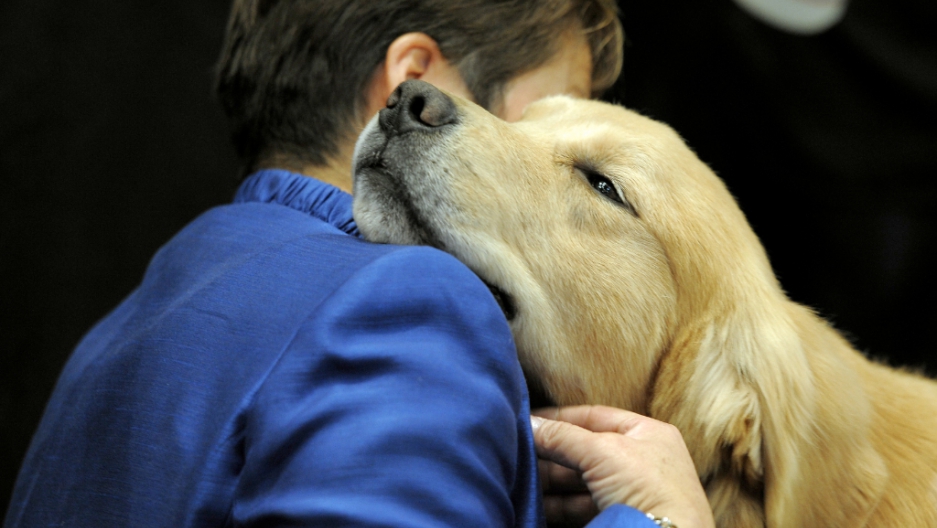 A team of golden retrievers have arrived in Newtown, Connecticut, to help those grieving after a shooting rampage on Friday killed 27 people, most of them young children. Here, a golden retrievers and handler during a New York dog show on February 14, 2012.
Credit: Timothy A. Clary
Share

Golden retrievers are coming to the rescue at tragedy-struck homes in Connecticut's Newtown, reported The Chicago Tribune, three days after an elementary school shooting there killed 20 children and six adults.

The canine team made the 800-mile trip from Chicago to Newtown in order to provide comfort to those who lost loved ones. The "comfort dogs" are part of a Lutheran Church Charities program to aid those in need of emotional support.

Each wears a name-tag card listing his or her Facebook page, Twitter account and email in case people want to find the animal again, according to the Tribune.

”There are a lot of people that are hurting,“ project organizer Tim Hetzner of Lutheran Church Charities told the Tribune. It's ”good for the children to have something [to think about] that is not the shooting.“

Dogs build "the atmosphere for people to share" because they are "non-judgmental" and "loving," Hetzner said.

The initiative comes out of a nation in mourning, with US President Barack Obama visiting Newtown on Sunday to address an interfaith vigil held for the victims — most of whom were six or seven years old.

"I am very mindful that mere words cannot match the depths of your sorrow, nor can they heal your wounded hearts," the US leader told a packed auditorium. "I can only hope it helps for you to know that you’re not alone in your grief, that our world, too, has been torn apart, that all across this land of ours, we have wept with you. We’ve pulled our children tight."

On Friday, gunman Adam Lanza shot his mother multiple times before arriving at Sandy Hook elementary school and killing 20 children and six adults within minutes. He later shot himself. The incident is under investigation.

”The whole town is suffering," Hetzner told the Tribune.

But this is not the first time dogs have come to the rescue following a national tragedy. The program sprung up in response to a 2008 shooting at Northern Illinois University in which five students were killed. The program has since reached out to people hit by Hurricane Sandy and now includes some 60 dogs in six states, according to the Tribune.

Here's a local report on the program: