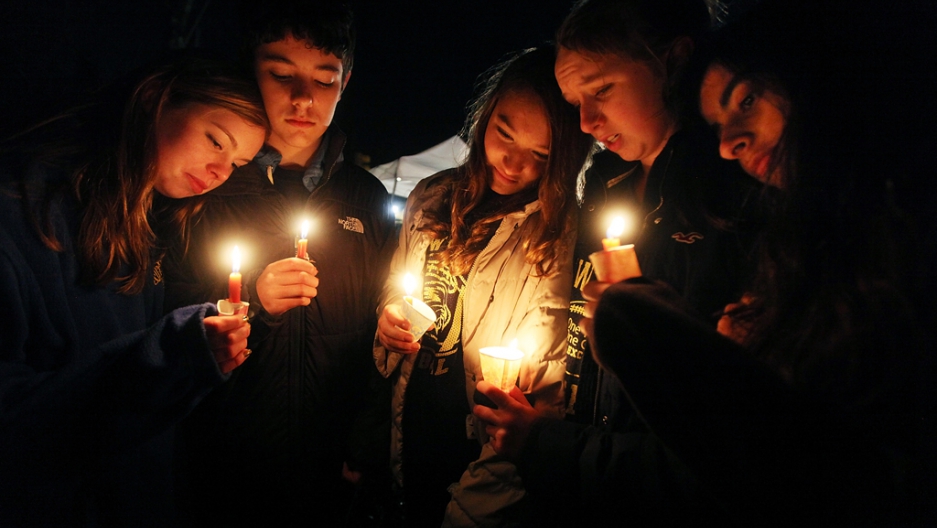 BUZZARDS BAY, Mass. — Their names and faces are now achingly familiar to tens of millions of Americans: Emilie Parker, just 6 years old, a little blond elf; Ana Marquez-Greene, also 6, playing on the piano; Victoria Soto, so proud to be a teacher, who tried to shield her first-graders with her body and died for it.

“These neighborhoods are our neighborhoods, and these children are our children,” said President Barack Obama, wiping away tears as he addressed the nation on Friday.

That was certainly true over a weekend that many Americans spent glued to their radios and televisions, grieving with the residents of Newtown, Conn., an idyllic New England village that will never be the same.

Twenty children and six adults were shot dead at the Sandy Hook Elementary School on Friday, in addition to the shooter, Adam Lanza. Lanza’s mother is also dead, killed at her home before Adam went on his deadly and inexplicable rampage.

As America goes into a holiday season dimmed by the tragedy, the debate is already raging. But the angry rhetoric is more indicative of the severe political polarization in the country than of any real attempt to tackle the deeper issues.

Sen. Dianne Feinstein (D-CA) has already pledged to introduce new gun-control legislation at the beginning of next year’s congressional session.

Speaking Sunday on NBC’s “Meet the Press,” Feinstein said her new bill builds on the assault weapons ban that expired in 2004. The purpose, she said, is to get “weapons of war off the streets of our cities.”

But it will not be easy.

Gun enthusiasts are equally vociferous in their defense of their Constitutional right to bear arms. The Second Amendment has become a shield for those who resist any restrictions on gun ownership.

We all know the slogans: “Guns don’t kill people. People kill people.” And “When guns are against the law, only outlaws will have guns.”

There are those who are already arguing that a few well-placed firearms inside Sandy Hook Elementary might have saved lives by stopping Adam Lanza in his tracks.

The problem is that emotions run so high on the issue that rational discussion is all but impossible. CNN’s Piers Morgan gave a taste of this in his show on Friday night.

The talk show host was unable to keep his composure as he engaged gun lobbyists like John Lott, author of “More Guns, Less Crime.”

"There are nearly 12,000 murders a year from guns in this country,” said Morgan. “When are you guys going to focus on that, and stop telling me the answer is more guns. It is not the answer. How many more kids have to die, before you guys say, 'we want less guns, not more.'"

Lott could barely get a word in, but repeatedly tried to make the point that gun control was not the answer.

"I'm upset, because I worry that the gun-control laws that you're pushing, have killed people," said Lott.

“What a load of nonsense,” Morgan shot back.

Gun-control proponents would sympathize with Morgan’s frustration. Some may even call for a blanket ban on weapons.

But efforts from Prohibition to the war on drugs have shown laws can only do so much — and have been known to backfire.

Even if weapons reform passes, what chance does the federal government have to regulate guns when states are going their own way on the issue?

Just one day before the Dec. 14 Newtown massacre, Michigan’s legislature passed a law allowing those with some specialized training to carry concealed weapons in once-forbidden zones such as schools, churches, hospitals, stadiums and bars.

The United States leads other so-called “civilized nations” in gun violence by a wide margin. This year alone there have been 16 multiple shootings, six of which qualify as mass killings by FBI parameters — four or more people killed in the course of one single incident.

Many are asking: Is there a deeper problem in society than the numbers of weapons?

We may never know what prompted Adam Lanza to take his mother’s guns and head to the Sandy Hook Elementary School to shoot small children. Some are suggesting that his alleged autism was to blame — something that, judging by active Twitter feeds, those with autism find ignorant and offensive.

Others point to his parents’ divorce, his mother’s alleged “demanding personality,” or similar psychobabble.

As Americans, we want to believe that everything has a reason and a solution, if we only look hard enough. We also want someone to blame.

“Progressive policies are to blame for today’s mass shooting in Newtown,” screamed one such blogger.

Some point to the separation of Church and State, another hot-button issue in the political debate.

“We ask why there is violence in our schools, but we’ve systematically removed God from our schools,” said Mike Huckabee, the former governor of Arkansas, responding to a question from Fox News’ Neil Cavuto. “Should we be so surprised that schools would become a place of carnage?” said Huckabee.

Obama, in his moving address at an interfaith vigil in Newtown Sunday evening, spoke of using the full power of the presidency to prevent such tragedies in the future.

But he faces an uphill battle, something that the president knows all too well.

“We will be told that the causes of such violence are complex, and that is true,” he said. “No single law, no set of laws can eliminate evil from the world or prevent every senseless act of violence in our society, but that can’t be an excuse for inaction. Surely we can do better than this.”

As parents and loved ones struggle to come to terms with unimaginable grief, a nation, with its president in the forefront, is trying to understand what in its makeup leads so regularly to scenes of mayhem and death.

The answers will not be easy to uncover, but at last, it seems, Americans have the will to begin.