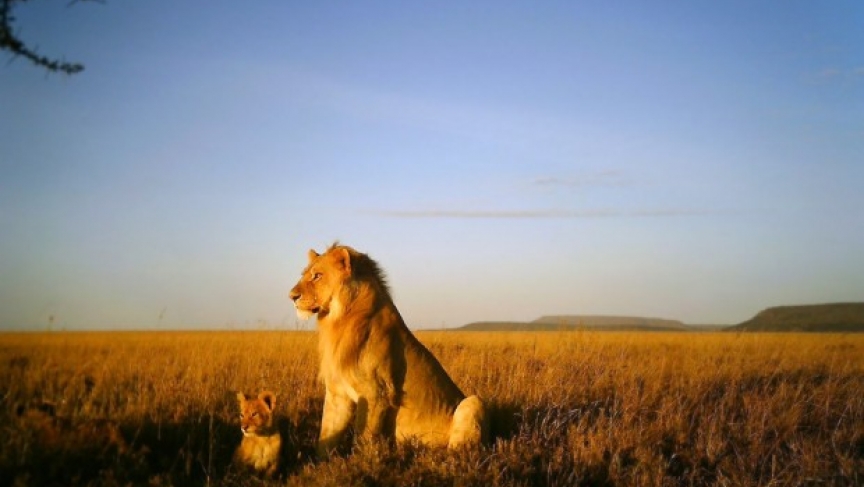 Share
Armchair scientists, rejoice. Today's Geo Quiz is all about getting up close and personal with with some of the world's biggest carnivores, without actually leaving the comfort of your own home. These big meat-eaters are residents of a national park in East Africa that covers more than 5,500 square miles. It was established in 1951, and contains grassland and savanna, but also river-fed forests. Tourism is allowed, but humans are not allowed to live permanently on park land. Scientists, though, are busy studying animal interactions in the park. And they're using more than 220 camera traps to help capture candid shots, especially of big predators. "There's a wonderful sequence where a lion comes up and falls asleep in front of the camera, and every once in a while we get a paw flicking, or a tail flicking, and the camera takes another shot," says Chris Lintott of Oxford University. We're looking for both the name of the park, and the country in which it's located. The answers are: the Serengeti National Park, located in Tanzania. For more than 40 years, scientists with the Serengeti Lion Project have been documenting the lives of lions in the park. Of course, in the old days, studying detailed animal interactions meant sending a graduate student out with diary. "That's like trying to understand Britain by sitting in Trafalgar Square for an afternoon," Lintott says. "You don't get a picture of everything that's going on." Lintott's involved with a project called Snapshot Serengeti. Scientists have set up more than 200 camera traps in the park to capture pictures not just of lions, but of all the wildlife. But here's the thing – those 200 cameras capture a lot of photos. Imagine if you had not hundreds, but millions of holiday snapshots from your African safari to sort through. "The cameras allow us to carpet the whole place, and get a real understanding of what's going on," says Lintott. "But only if we have some help in sorting through the three million holiday snaps that we've got." And so, on the Snapshot Serengeti website, you are asked to look through the pictures. With just a few clicks, you can help identify the animals, number them, and describe what they're doing in the picture. "The cameras capture much everything," Lintott says, remembering one sequence of hyena photos that recently caught his eye. "The first is the hyena looking straight down the lens, like a superstar out on a Friday night. And the second one, the hyena's in the background skulking. And the third shot is the inside of the hyena's mouth as it attacks the camera." "And that's one of the problems," Lintott says. "The animals take a strong interest in the cameras and they don't survive all that long." The cameras can last about two months before needing maintenance and new batteries. Of course, they're likely to be torn down by elephants or infested by ants before then. But it's all worth it. The photos, Lintott says, will help scientists get a clearer picture of how animals, especially big predators like lions, interact with other big predators in the park. "Do they compete for food? Do they attack each other? Do they ignore each other and go about their business? And so that's one of the things we think we can understand by doing this experiment." Lintott says experts are also hoping to get a better sense of just how much park land big carnivores need to survive and thrive. The Snapshot Serengeti project, by the way, has a good pedigree. Lintott's group also runs two other popular "citizen science" projects: One called Old Weather gives you the chance to mine old Navy ships' logs for climate data. Another called Galaxy Zoo allows you to help classify galaxies.