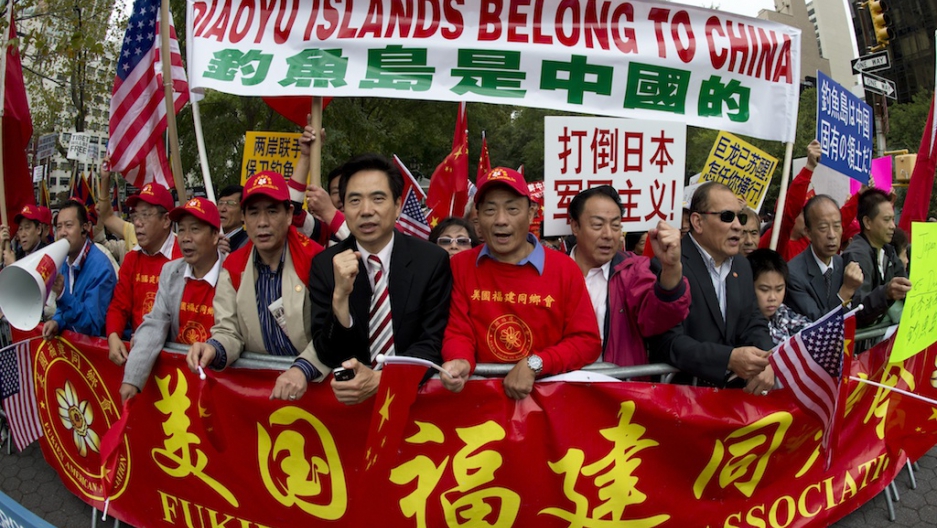 Demonstrators believing that the Diaoyu Islands belong to China, protest across the street from the United Nations, during the 67th United Nations General Assembly meeting, Sept. 26, 2012 in New York.
Credit: Don Emmert
Share

TOKYO, Japan — This week’s escalation of a territorial dispute between China and Japan has highlighted the delicate diplomatic task facing the US as it seeks to maintain stability in a region shaken by North Korea’s recent rocket launch.

The latest episode in the long-standing row came on Thursday morning, when a Chinese marine surveillance aircraft entered Japanese airspace over the Senkakus, a group of islands in the East China Sea that are administered by Japan but also claimed by China.

Japan immediately scrambled eight F-15 fighter jets, but the Chinese civilian aircraft had left the area by the time they arrived. "Despite our warnings ... it is extremely regrettable that an intrusion into our airspace has been committed in this way," Japan’s top government spokesman, Osamu Fujimura, told reporters.

“The Diaoyu and its affiliated islands have been China's inherent territory since ancient times," he said. "China requires the Japanese side stop illegal activities in the waters and airspace of the Diaoyu islands."

Beijing stepped up its claim to the islands after Japan’s government bought them from their private Japanese owners in September, sparking violent demonstrations in several Chinese cities and forcing the temporary closure of expat Japanese businesses.

Chinese surveillance ships have since made regular intrusions into Japanese waters near the islands, but this recent incident was the first involving aircraft.

The spat has presented the Obama administration with the difficult task of reassuring Tokyo that it stands ready to honor its bilateral security obligations, under which it must come to Japan's defense if it is attacked, while at the same time avoiding friction with Beijing.

Speaking to reporters in Malaysia, Kurt Campbell, the US assistant secretary of state for East Asian and Pacific affairs, said: "The security treaty between the United States and Japan applies to any provocative set of circumstances."

"We are encouraging all sides to take appropriate steps so that there will be no misunderstanding or miscalculation that could trigger an environment that would be antithetical to peace and stability," she continued.

John Swenson-Wright, senior consulting fellow for Asia at Chatham House, said the Chinese flyover was an “unhelpful development” for the US.

“Washington is trying to emphasize its commitment to Japan’s defense but at the same time it’s being careful not to commit on the sovereignty question,” he said. “There’s not much the US can do at this juncture, but certainly there is anxiety in Washington over this.”

Late last month, the US senate passed an amendment reaffirming Washington's commitment to Japan on the Senkaku Islands, but repeated that it would not take sides on the sovereignty issue.

“This amendment is a strong statement of support for a vital ally in Pacific Asia,” said Senator Jim Webb.

More from GlobalPost: What Japan and China stand to gain, and lose, in Senkaku

“Over the past several years, China has taken increasingly aggressive actions to assert its claim over the Senkaku Islands … This amendment unequivocally states that the United States acknowledges the administration of Japan over the islands, and that this position will not be changed through threats, coercion, or military action.”

The timing of Thursday’s incident is significant, coming just days before Japan is to hold a general election that is expected to return the conservative Liberal Democratic Party to office under its hawkish leader, Shinzo Abe.

Swenson-Wright suggested China’s flyover was a response to increasingly hardline rhetoric from Abe and other Japanese politicians, including Shintaro Ishihara, the nationalist former governor of Tokyo whose plan to buy the islands in April prompted the counter bid from the national government.

“In a sense the timing is puzzling as it plays into the hands of Abe and Ishihara,” he said. “China’s position has been prompted by rhetoric on the ground in Japan, leading it to push even further with its claim [to the islands]."

While Chinese and Japanese civilian vessels have been shadowing each other in the area for several weeks, the involvement of aircraft has increased the likelihood of an accidental collision that could trigger a conflict.

The Asahi Shimbun newspaper warned in an editorial on Friday that further intrusions by Chinese aircraft could “take the territorial spat between the two countries to a seriously dangerous new phase."

It added: "This is a highly provocative act that could lead to an armed conflict between the two countries.”