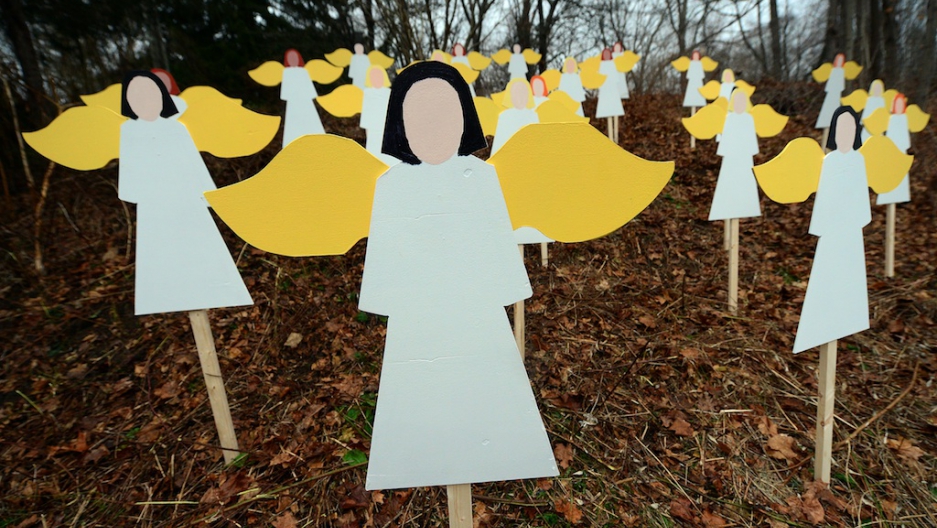 Twenty seven angel wood cut-outs are set up on hillside in memory to the victims of an elementary school shooting in Newtown, Connecticut, December 16, 2012.
Credit: Emmanuel Dunand
Share

US President Barack Obama on Sunday visited Newtown, Connecticut, where he addressed an interfaith vigil and met with survivors and relatives two days after a shooting rampage at the local Sandy Hook elementary school killed 26 people, reported The Associated Press.

"Here in Newtown, I come to offer the love and prayers of the nation," Obama said, speaking to a full high school auditorium. "I am very mindful that mere words cannot match the depths of your sorrow, nor can they heal your wounded hearts."

The tragedy, he said, was an opportunity for reflection -- and for action.

"I’ll use whatever power this office holds to engage my fellow citizens in an effort aimed at preventing more tragedies like this. Because what choice do we have?" he asked. "Are we really prepared to say that we’re powerless in the face of such carnage? That the politics are too hard? Are we prepared to say that such violence visited upon our children year after year is simply the price of our freedom?"

Whatever lies ahead, Obama said he came bearing a message for the grieving city: "You are not alone," he told them.

Reporting from the press pool, The Guardian said the reaction to Obama's comments was immediate: "Deep sobs were heard from several sections of the audience, as the president started to read the names of the teachers who were killed at Sandy Hook Elementary school."

Here he is earlier holding the granddaughter of the Sandy Hook principal:

My mom would be SO proud to see President Obama holding her granddaughter. But not as proud as I am of her. twitter.com/Chass63/status…

Authorities are still attempting to piece together how and why 20-year-old gunman Adam Lanza killed his mother and 26 innocent children and educators at the Sandy Hook elementary school there on Friday, the Wall Street Journal reported.

Police today said Lanza, who was reportedly mentally disturbed, brought a lot of ammunition and several guns with him when he arrived at the school.

Meanwhile, the surviving students of Sandy Hook Elementary will not be returning to the scene of the massacre, and instead will be transferred to an unused school nearby, Newtown School Superintendent Janet Robinson told reporters, according to Reuters.

"The Town of Monroe has graciously offered their Chalk Hill School," Robinson said in a statement. "This facility, which is currently not being used, is in excellent condition and will accommodate all of the Sandy Hill School students and staff. It is located just across the border from Newtown and should be ready for occupancy in just a few days."

Newtown police Lt. George Sinko said at a news conference Sunday that it was still unclear when students would return to school, but said that authorities want to keep the students together because they "need to support each other."

All other area schools will be back in session on Tuesday, according to the Associated Press.