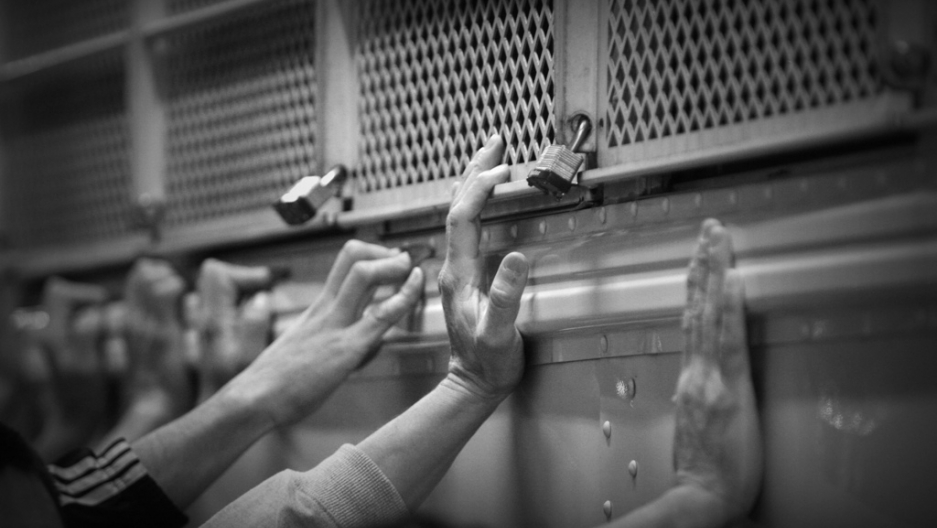 These Salvadoran immigrants in the US are being searched by guards before being deported from Texas, but at least they have a nationality and some even a place to go back to. What to do with the stateless people who have no citizenship at all?
Credit: Jose Cabezas
Share

TUSCON, Ariz. — Each morning when Tatianna Lesnikova wakes up, she mourns what she left behind when she fled the threat of political persecution in the Ukraine to the United States 20 years ago: Her now 39-year-old son.

Then she remembers even if she wanted to leave the US to see him again, she can’t. Unless the law changes, she is stuck here for the rest of her life.

The fact that the 63-year-old is stateless — meaning she has no citizenship anywhere at all — has dropped her into a twilight zone under US immigration law, which has no legal provisions for people like her.

She came to the US on a Soviet passport and the Ukraine refuses to recognize her citizenship or issue her travel documents, so she can’t travel. US authorities have repeatedly tried to deport her, despite the fact that there is nowhere to send her to.

“It’s like a hell,” she said from her home in Massachusetts recently. “I feel less than human.”

After years of failed efforts, human rights advocates say US President Barack Obama’s re-election has provided a sliver of opportunity to help the more than 4,000 stateless people in the United States like Lesnikova gain permanent legal status.

Immigration reform is firmly on the national agenda and, advocates say, top officials have sent signals that they want to help. A campaign launched this week by United Nations High Commissioner for Refugees (UNHCR) in the US could be the impetus that drives Congress to pass legislation finally offering America’s stateless a path to full legal status, they hope.

If that happens, it could have a cascading effect by prompting other countries that look to the United States for leadership to offer more protection to the roughly 12 million stateless people worldwide.

“We have to put statelessness on the radar,” said David Baluarte, an attorney working at American University’s human rights law clinic who was the primary author of a UNHCR report on statelessness in the United States released on Monday. “This is a problem that is in our power to address.”

Though the federal government has repeatedly pledged to help them, America’s stateless people remain among the most vulnerable in the Western world, largely because almost no one knows they exist.

“In the United States we often take our nationality for granted,” Baluarte said. “The idea that people don’t have citizenship is difficult to conceptualize.”

Several European countries offer pathways to legalization, often under the framework of United Nations conventions. But in the US, the stateless have no way to gain a real immigration status unless they are granted asylum.

If their asylum requests are rejected, as in Lesnikova’s case, they live the rest of their lives in a sort of hellish quasi-legality. Because they are unable to get travel documents, they can’t leave the country even if they wanted to. And they are repeatedly put into immigration detention as officials try but fail to deport them.

Their precarious position can lead to almost unfathomable situations, such as the case of Mikhail Sebastian, whom GlobalPost first reported on in October.

When the stateless man tried to return to his home in the mainland United States from a vacation to American Samoa last year, federal immigration officials said he had “self-deported” and refused to allow him back — despite the fact that American Samoa is a US territory.

Sebastian has been marooned for nearly a year on the isolated Pacific island, as officials work out what to do with him.

In other cases highlighted in the UNHCR report, stateless people in the US have ended up in homeless shelters or suffered serious psychological trauma after spending extended periods of time in immigration detention.

Authorities say they’re working to make common sense policy reform to reduce the burden on this small section of society. Earlier this year, for instance, the Homeland Security Department said it would reduce the number of times per year that stateless people are required to physically check in with immigration officials. The UNHCR report calls for other adjustments, such as providing basic travel documents that would allow stateless to travel outside the United States.

But the real jackpot — a pathway to legal status and an end to limbo — can only come from Congress.

Despite the support of heavyweights like Sen. Patrick Leahy (D-Vt.), previous attempts to pass legislation offering legalization pathways for the stateless, including one in 2010, have failed.

But advocates are banking on pledges by the United States government to finally address the problem. Last year the State Department promised to work with Congress to find a way for stateless people to gain permanent residency and eventually citizenship. A bill winding its way through Congress now, the Refugee Protection Act of 2011, would allow some of the most vulnerable of America’s stateless to gain formal status and provide hope to non-citizens around the world.

“If the US did establish better domestic protection for these people it could really add momentum to solving this everywhere,” said Julia Harrington Reddy, a senior legal officer with the Open Society Justice Initiative, which promotes human rights and builds legal capacity.

It is no more real to anyone than Lesnikova, who left behind a life as a successful piano teacher in the Ukraine and now works as a certified nursing assistant.

As the years have passed, she has found it difficult to maintain of hope that her situation will ever change. But when she thinks of her son, now living in Russia, she resolves to stay strong.

“He’s a good boy, an intelligent boy, I want to see him again,” she said.