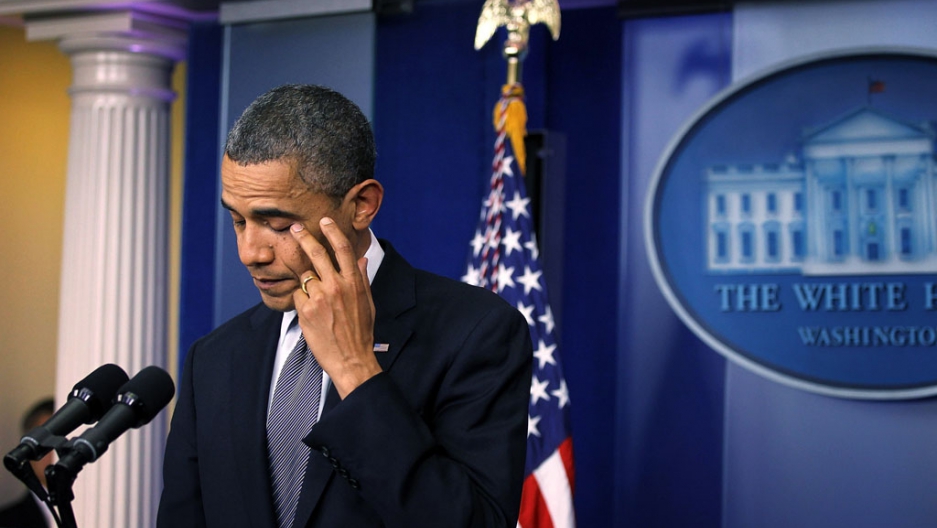 U.S. President Barack Obama wipes tears as he makes a statement at the White House in Washington, DC, in response to the Sandy Hook elementary school shooting in Newtown, Connecticut, on December 14, 2012.
Credit: Alex Wong
Share

State and national representatives expressed shock and sadness upon hearing a gunman killed 27 people – an estimated 18 of them children – at Sandy Hook elementary school.

Gov. Dan Malloy, who was to meet families later today, told CNN he was “horrified.”

"We've endured too many of these tragedies in the past few years. And each time I hear the news, I react not as a president, but as anybody else would, as a parent," he told a White House briefing later uploaded to YouTube.

"The majority of those who died today were children. Beautiful little kids between the ages of 5 and 10 years old,"  he added before pausing to control his voice and wipe away a tear. "They had their entire lives ahead of them."

The president, however, did say America needed to do more to prevent shootings regardless if they're in a Newtown elementary school, a shopping mall in Oregon, a mosque in Wisconsin or a movie theater in Colorado.

"We're going to have to come together and take meaningful action to prevent more tragedies like this regardless of the politics," he said.

America, he said, needs to see the US leader sending a bill to Congress "to fix this problem."

"Calling for ‘meaningful action’ is not enough," the statement said. "We need immediate action. We have heard all the rhetoric before. What we have not seen is leadership – not from the White House and not from Congress."

Former Arkansas governor Mike Huckabee had an alternate explanation, telling FOX News today the shooting occured because we "removed God from our schools."

Connecticut’s senators – Joe Lieberman and Richard Blumenthal – have both served as state attorney general, and they both offered their condolences shortly after the news broke.

“What is important now it to give the first responders and local authorities the support needed to address the situation as it changes and keep the community of Newtown safe,” Phillips said in an email to Politico.

“I am shocked and saddened by the horrific news from Sandy Hook Elementary School this morning, and I pray that kids, teachers, staff, and families reach safety as quickly as possible,” Murphy said, according to Politico.

“Our thoughts are with the victims and their loved ones.”

On his Facebook page, Mark Kelly, the husband of former Arizona Rep. Gabrielle Giffords, who was shot in the head while campaigning in Tucson in January 2011, said his wife sends her prayers to the victims' families and the commmunity of Newtown, the Huffington Post reported. Giffords resigned from Congress to focus on her rehabilitation after the shooting rampage, which also killed six others, including a 9-year-old girl.

Kelly wrote: "As we mourn, we must sound a call for our leaders to stand up and do what is right. This time our response must consist of more than regret, sorrow, and condolence. The children of Sandy Hook Elementary School and all victims of gun violence deserve leaders who have the courage to participate in a meaningful discussion about our gun laws - and how they can be reformed and better enforced to prevent gun violence and death in America. This can no longer wait."

Many political figures, including Blumenthal, took to Twitter in reaction to the shooting.

My thoughts & prayers are with the Sandy Hook Elementary & #Newtown community on this tragic day. Hoping for safety of students & teachers

No words can console the parents of the children murdered at Sandy Hook. We share our prayers and our grief over these horrifying events.

“As those of us in Tucson know, senseless acts such as these tear at the very fabric of a community,” Barber said in a prepared release.

“In times like this, we come together to support each other. To the people of Newtown, we are with you today and in the days, weeks and months ahead.”

Connecticut’s congresswoman-elect Elizabeth Esty said as a “mother, I can only begin to imagine what the students, parents, teachers and staff of Sandy Hook Elementary must be experiencing. My thoughts and prayers go out to everyone impacted by this horrific tragedy.”

On Twitter, she said the shooting goes beyond hunting wild animals.

Dear Colleagues: it's time 2 act to control access 2 handguns. This not about ducks & deer. I pray for the victims. I pray for our courage.

My thoughts and prayers are with the children, teachers and families in Connecticut as they mourn this heartbreaking tragedy.

.@callygingrich and I send our thoughts and prayers to the victims and their families in Newtown, Connecticut.

As a father, my thoughts and prayers are with the victims of this horrific tragedy in Connecticut.