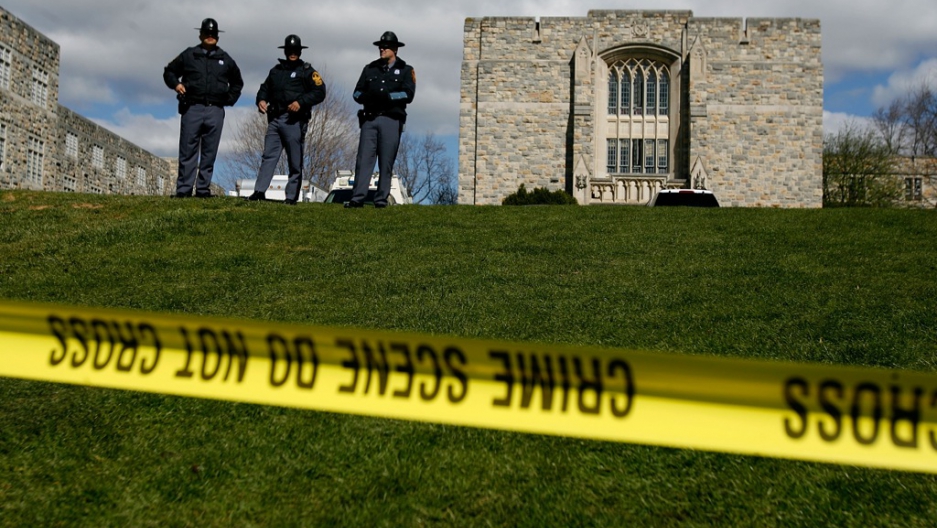 Virginia State Police stand guard outside Norris Hall, where 31 people were shot and killed a day earlier on the campus of Virginia Tech, April 17, 2007 in Blacksburg, Virginia. According to police, the gunman responsible for the shootings that left a total of 33 people dead were carried out by Cho Seung-Hui, 23, a student and native of South Korea.
Credit: Chip Somodevilla
Share

Editor's Note: This story was originally published Dec. 14, 2012. It has been updated to reflect current events.

In the United States, it's another day, another shooting.

This time a gunman, or possibly gunmen, opened fire at a US Navy Yard in Washington, DC. Details of the shooting — how many were hurt or killed, who was responsible, and the motive — remain scarce. You can get live updates here.

The United States is no stranger to deadly shooting massacres. Here's a look at some of the most tragic.

James Eagan Homes, 24, set off gas canisters and opened fire during a midnight showing of "The Dark Knight Rises." In a 20-minute neighborhood stroll, Army veteran Howard Unruh killed 13 people, three of them children. Unruh died in 2009 after 60 years of confinement. Former army psychiatrist Nidal Malik Hasan killed 13 when he fired into a group of soldiers destined for Iraq and Afghanistan. A US military court sentenced Hasan to death. Jiverly Wong, 41, entered the front of the immigration services center where he was an ESL student and opened fire, killing 13 and himself. It is still unclear as to why Wong carried out the killings though some suspected he felt degraded due to his poor English skills and difficulty finding good work. Perhaps the most widely known US school shooting in history, teens Eric Harris and Dylan Klebold killed 13 people at Columbine High School in Littleton, Colo. Many Americans and media wrongfully concluded the two shooters were social outcasts until the FBI concluded Harris was a psychopath and Klebold, a depressive. Patrick Sherrill, 44, killed 15 of his co-workers. He was expecting his bosses to fire him from his job as a letter carrier. Ex-Marine sniper Charles Whitman, 25, killed 16 from an observation deck of a campus tower until police eventually killed him. James Oliver Huberty, 41, shot and killed 21 people at a McDonald's until a police sniper managed to kill him. George Hennard, 35, slammed his truck through the window of Luby's Cafeteria and then proceeded to shoot 23 people before taking his own life.

Adam Lanza, 20, walked into Sandy Hook Elementary school and opened fire, killing 20 children and six adults. Before driving to the school, he also shot and killed his own mother. Student Seung Hui Cho, 23, went through multiple buildings of the college campus, ultimately killing 32 people before killing himself. Cho was a South Korean native and senior at the time of the shootings. He had previously been diagnosed with depression.