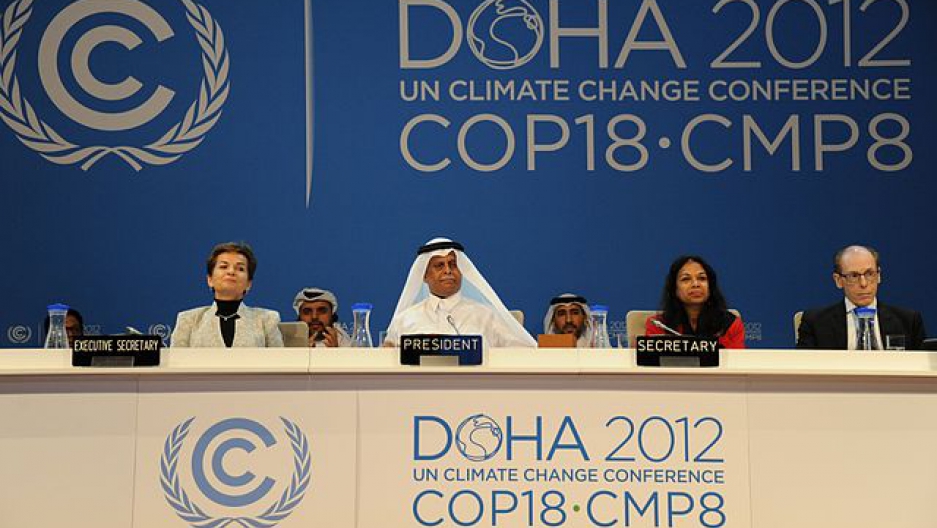 Delegates to the 2012 United Nations climate change conference in Doha, Qatar, reached agreement to extend the 1997 Kyoto protocol, but little else. (Photo courtesy of UNclimatechange via Wikimedia Commons).

Progress and the sense of renewed urgency was to be the theme for this year’s meeting of the United Nations Climate Change Secretariat in Doha, Qatar.

The conference, made up of delegates from more than 190 nations, was supposed to address two sets of agreements — though just one was ultimately successful.

Alden Meyer, director of policy and strategy at the Union of Concerned Scientists, says the first agreement was set to extend the Kyoto protocol for eight more years. The other, to try and engage the U.S., developing countries and others not included in Kyoto, by encouraging them to take action on climate change voluntarily — without a legally binding agreement.

Since 2005 delegates have been negotiating what would replace or extend the initial commitments made under the Kyoto protocol, Meyer says.

"The betting here is that you would get the European Union, Australia, Norway, Switzerland, a few other countries, agreeing to stay in Kyoto, but you've already seen Japan, Russia, New Zealand and Canada say that they will not take on commitments covered by Kyoto,” he said.

The United States has never ratified the Kyoto Protocol.

This means the share of emissions covered by Kyoto is shrinking and thus cannot do the job of reducing climate change by itself.

At the Doha meeting, a handful of countries made pledges, Meyer says, including the Dominican Republic, which announced it would cut its emissions by about 25 percent. Ironically, he says, Qatar, the host of the meeting and one of the richest countries and highest emitters per capita, hasn't made any pledges to reduce emissions.

But the meeting did produce positive outcomes. The various parties agreed to extend the Kyoto Protocol by eight years, though that only applies to nations that have agreed to be bound by it. The group also set in motion another set of agreements, but financial short-falls, including how to support developing countries trying to reduce their emissions.

"In Copenhagen, President Obama and Hillary Clinton came in and promised to try to ratchet up collective support from developed countries on climate finance for activities like deploying renewable energy and energy efficiency technologies in developing countries, conserving rainforests and adapting to the mounting impacts of climate change,” he said.

The U.S. has committed to increasing support from the nearly $10 billion a year from developing countries toward $100 billion a year by 2020, Meyer said. However, he says the chances of industrialized countries keeping that commitment will be costly. But the cost of inaction would be far greater.

"When the world banking system was on the verge of collapse in 2008, leaders and finance ministers from around the world mobilized $1 trillion seemingly overnight, to bail out the banks," he said. "And yet we're having such a hard time going above $10 billion a year toward bailing out the world's ecosystems and ailing communities.”

Meyer says these summit meetings are making progress, just not fast enough. But there’s no other group of leaders working together at all.