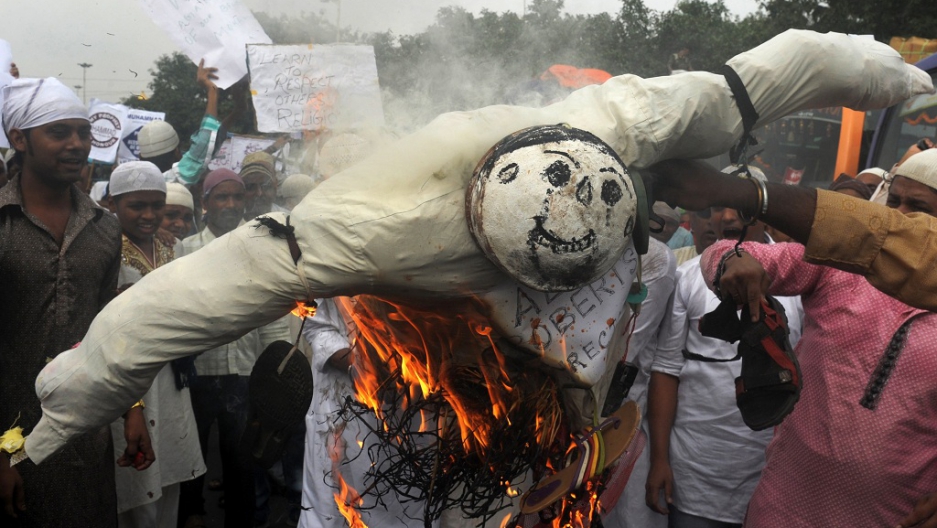 Indian Muslim protesters burn an effigy of Alan Roberts, the alleged director of an anti-Islam video, during a protest against the film in Kolkata on October 5, 2012. The low-budget, US-produced 'Innocence of Muslims' movie has incited a wave of bloody anti-American violence in Libya, Egypt, Sudan, Tunisia, Yemen and in several other countries across the Muslim world.
Credit: Dibyangshu Sarkar
Share

The  Izz ad-Din al-Qassam Cyber Fighters have launched the second phase of their “Ababil” operation, in which the Muslim hacker collective has pledged to carry out attacks against major US banks, according to the group’s post on Pastebin.

Al-Qassam has pledged that this second phase of their operation will include an increased number of attacks, specifically against US Bancorp, JP Morgan Chase, Bank of America, PNC Financial Services Group and SunTrust Bank.

It could be said the group has become a single-issue hacker collective: the goals of the organization are now limited to removing "Innocence of Muslims" from YouTube. The insults made against the Prophet Mohammed served as a catalyst for uniting the collective.

“As we said earlier, the implementing of these attacks is because of widespread and organized offends to Islamic spirituals and holy issues, especially the great Prophet Mohammad(PBUH) and if this offended film is going to be eliminated from the internet, the belonging attacks, also will be stopped,” the group's posting on Pastebin read.

“There is no other objective and if the movie is removed, the attacks will be stopped. Protesting against insult to the Prophet united and coordinated us,” said an Izz ad-Din al-Qassam Cyber Fighters representative to Softpedia in November.

The threats have US banks on high alert, and many are preparing for the attack and alerting customers of possible website downtime.

"PNC is aware that some US banks may be the target of a potential cyberattack," the bank wrote on its social media sites Wednesday evening. "This potential threat could result in high volume of electronic traffic that may make it difficult for our customers to log onto online banking."

Bankinfo Security has already reported slight interruptions in service for SunTrust and Bank of America customers attempting to access their online banking accounts.

“We have never said that we don’t like American people; rather, our statements have been about the ruling system of this country. This is not just our opinion but the opinion of the 99 percent of American people as well,” said an Izz ad-Din al-Qassam Cyber Fighters representative.

After the group’s first hack last Octoberseveral cyber-security officials reported that the al-Qassam Cyber Fighters could be operating under orders from Tehran. The group claims, however, to be acting independently and not to be under orders from any government.

“We are not dependent on any government. We merely wanted to protest against the insulting movie. But there are some ones who want to portray this action as political. So they are deflecting the issue to the side of their political leanings,” one of the group’s representatives said in an interview with NBC news.