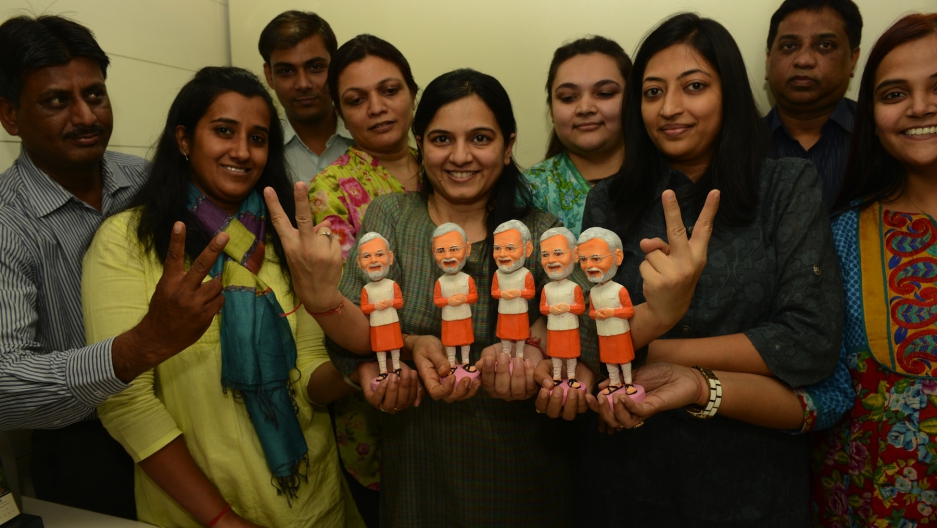 Left-leaning social activists call him a fascist. But Gujarat Chief Minister Narendra Modi may be the only Indian politician popular enough to warrant his own bobblehead doll.
Share

"While Mr. Modi has never publicly stated his ambition to become prime minister, he is widely seen as a leading contender," writes the Wall Street Journal. "As a result, campaigning for this election has focused almost entirely on Mr. Modi, who is at once one of the country’s most popular and most polarizing politicians."

“The main focus is to make this election a referendum on Modi,” the Arun Jaitley, a senior BJP politician, told the Hindustan Times earlier this week.

Nearly 40 million people are eligible to cast their ballots in 182 assembly constituencies, reports the BBC, which notes that Modi was chief minister of the state during the 2002 religious riots when more than 1,000 people, mostly Muslims, were killed. Though the Supreme Court ruled there was not enough evidence to pursue a case against him, many Indians still blame Modi for the authorities' slow response in stopping the violence, and the governments of the UK and US have in the past denied him a travel visa as a result.

Perhaps for that reason, Modi is eschewing the rhetoric of Hindu nationalism, or Hindutva, during this campaign, in order to prove to the other BJP leaders that he is electable on the national scale -- where the party will need to draw together coalition partners if it hopes to win power.

According to India Today, Modi is seeking a third straight term in office largely based on his track record on economic development.

"The near complete absence of emotive communal [Hindu vs. Muslim] issue, coupled with the launch of Gujarat Parivartan Party (GPP) by [former BJP loyalist] Keshubhai Patel and the anti-incumbency factor may put hurdles in his pursuit of power for an unprecedented third term in a row," the magazine writes.

To respond to those threats, Modi "has launched a high-tech campaign targeted at the 'faithful' urban voters who have benefited from rapid industrialisation of the state under him," according to the weekly.

Votes will be cast in almost half the seats - 87 - during Thursday's polls, the BBC said. The second phase will be held on 17 December, with counting set for 20 December.