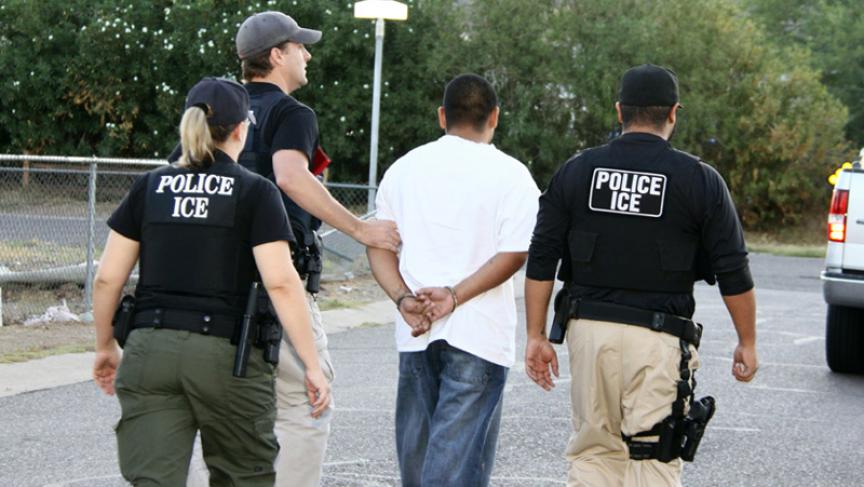 If an undocumented immigrant commits a serious crime in the United States and their home country won’t take them back, oftentimes they're released.

A yearlong Boston Globe investigation found over the past four years, federal immigration officials have released more than 8,500 undocumented immigrants convicted of murder, rape and other serious crimes in the United States. When immigration and customs enforcement officials release these criminals, they often don't notify local law enforcement authorities or even victims of the previous crimes.

Maria Sacchetti, an immigration reporter for The Boston Globe, says the detention and release of undocumented immigrants with criminal records is indicative of a culture of secrecy that pervades ICE.

One example Sacchetti gives, is of Qian Wu, a Chinese immigrant living in New York who was brutally attacked in 2006 by Huang Chen, an undocumented immigrant. Wu thought Chen was deported to China. Instead immigration officials held him, on and off, in El Paso, Texas. Three years later he reappeared at Wu's apartment in New York and murdered her.

Part of the problem, Sacchetti says, is the federal immigration system is bound by law to protect an immigrant’s privacy. But Sacchetti says most people never receive this kind of privacy when they're arrested because the information becomes public record — along with their release.

Sacchetti said, once a home country declines to take a convicted criminal back, the U.S. can't keep them incarcerated because the Supreme Court says six months is a reasonable amount of time to hold somebody in jail to deport them.

"If you can't deport them by then, you can't hold them forever. They're not charged with any crimes and they've finished serving the time they were supposed to serve," she said.

What could change this problem, Sacchetti says, is public accountability.

"Let the public know that this debate is going on between the United States and other countries who won't take their citizens back," she said.

Another way to change the problem she says, is to ask if immigration officials are properly evaluating people like Huang Chen, who was taking medication on his own with no monitoring. Wu, the woman Chen attacked and later killed, had a restraining order against him, but wasn't told he was coming back. Neither was the district attorney's office that handled his prosecution.

In her report, Sacchetti fought for more information about convicted immigrants.

"We filed a Freedom for Information Act request for the names of criminals. Immigration officials response to us was that they weigh the privacy interests of the individual against the public interest in the matter," she said. "They felt, in this situation, the public interest was minimal and that it would be an unwarranted (invasion) of the immigrant's privacy for the public to know their names.”

But, Sacchetti said, the lack of immigration information is not limited to criminals.

In another report, a 29-year-old woman named Irene Bamenga, didn't commit a crime but realized her visa was running out. Bamenga and her husband left the country by crossing the border into Canada, but officials saw she was undocumented, and detained her. Bamenga, Sacchetti says, a citizen of France, and her husband, a legal resident, were both refugees and knew they had over-stayed their visa. Bamenga, who hadn't committed a crime, was held in an American jail for 12 days, without medication for a very serious heart condition and died.

"When the government uses its extraordinary power to put any of us in jail (it's) public record. And that is to protect all of us, to make sure that the government can't secretly arrest us, can't secretly prosecute us. It goes right back to the Constitution. But there's nothing about immigrants," she said.

While Bamenga was held in jail, her husband tried to let people know she needed her medication. But, Sacchetti says, no one found out what was happening until she died.

Sacchetti says although they're getting a lot of reactions to the investigation, the debate remains polarized. Some who advocate for immigrants says the investigation makes all immigrants look like criminals. While others say the stories are sympathetic toward immigrants.

"I think the reality is, this entire system lacks public accountability. It is the focus of so much national debate and we know so little about what is really happening,” she said. "It's the largest federal law enforcement agency in the United States and no one else is allowed to play behind that wall of secrecy."