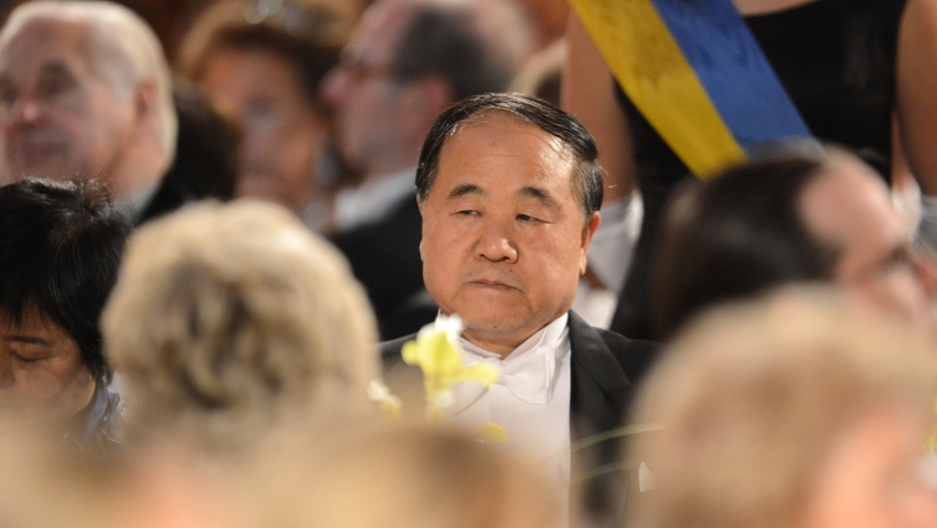 TAIPEI, Taiwan — It’s been a tough week for Mo Yan. The 57-year-old Chinese author received the Nobel prize in literature this week, prompting accolades at home.

But no sooner had state-run media extolled him as a cultural hero than critics started hurling a very different kind of label his way. "Stooge," "prostitute" and "sellout" were among the chosen epithets. Detractors as prominent as Salman Rushdie called the man a "patsy."

Why, you ask? Not only did Mo, a Communist Party member with strong ties to Beijing, refuse to use his Nobel platform to push for the release of fellow Nobel laureate Liu Xiaobo, but he also spoke out in explicit favor of censorship. Speaking in Stockholm this week, Mo called censorship "necessary" and likened it to routine airport security checks.

“Giving Mo Yan this prize was a real disaster. His comments in Stockholm ... are pretty ironic since his pen name means 'Be silent.’ He seems to be well covered there,” said Kerry Brown, director of China Studies Center at the University of Sydney.

Brown says China’s contradictory stance of bashing Liu’s award as “irrelevant” and an intrusion on its “internal affairs” while praising Mo’s win reflects deep-seated insecurities about how the burgeoning superpower wants to be viewed abroad.

“On the one hand they berate the prize for not being representative, then they take it as a great accolade. No one comes out of this well. But I think the Nobel prizes are showing themselves to be self-parody. I wonder how much credibility they now have,” he said.

Last week, a group of 134 Nobel winners across six disciplines penned an open letter to Beijing demanding Liu’s release. That was followed by an Associated Press report that the Nobel laureate’s wife, Liu Xia, was being held under house arrest as punishment for his “crimes.”

Liu, whose 2010 award ceremony was marked by an empty chair because he wasn’t permitted travel to Sweden, has been branded a criminal by Beijing for helping to write Charter 08. The manifesto calls for sweeping judicial and civil reforms and an end to the Middle Kingdom’s one-party rule.

But Mo, who said in October that he “hoped” Liu would be released, steadfastly refused to discuss his fellow laureate's 11-year sentence before accepting the $1.2 million cash prize on Monday.

That decision drew the ire of a number of notable and outspoken critics.

“He has defended the system of censorship ... then in his lecture he talks about storytelling — to use a Chinese expression, he is like a prostitute insisting her services are clean,” said dissident poet Ye Du. Ye added went on to call him a “dwarf” of a human being.

Beijing-based artist Ai Weiwei, himself no stranger to house arrest, tweeted: ”Mo Yan’s talk about story telling is about covering things up and hiding, it was powerless, disgraceful, a betrayal and a sellout.”

Salman Rushdie, who has lived under the pale of death threats for years for his writing, called him “the Chinese equivalent of the Soviet Russian apparatchik writer Mikhail Sholokhov: a patsy of the regime.”

More from GlobalPost: China scrambles to control the conversation on Mo Yan

Herta Müller, the Romanian author who won the Nobel in 2009, told a Swedish newspaper that Mo’s selection was “a catastrophe” and “incredibly upsetting.”

Some observers were less quick to judge.

“The real question should be: Does the Western press expect him to become a martyr, or make martyrs of his entire family? Because that’s what would happen to him if he spoke out in Sweden. I wonder how many Western journalists would do the same if push actually came to shove. The authorities must be placing him under enormous pressure right now,” said a senior editor of the Vietnam News Agency, who spoke on condition of anonymity.

Vietnam labors under similar draconian restrictions as its neighbor to the north.

“This idea that everybody should immediately throw themselves on the sword is ludicrous. If you lived under my system, would you do it? Let’s be realistic. There are many countries in Asia working under the same system but with different names. Because it’s China it’s a big deal. Do you think the press is free in Singapore, Malaysia or Thailand?” he said.

China’s state-run media fawned over Mo’s choice of Western wardrobe with “Chinese characteristics” or backed his decision to keep politics outside the fringes of a literary award, while “bridging the gap between Chinese culture and rest of the world.”

In October, after the Nobel prize was announced, China Digital Times posted this official missive from the State Council Information Office on its website:

To all Web sites nationwide: In light of Mo Yan winning the Nobel prize for literature, monitoring of microblogs, forums, blogs and similar key points must be strengthened. Be firm in removing all comments which disgrace the Party and the government, defame cultural work, mention Nobel laureates Liu Xiaobo and Gao Xingjian and associated harmful material. Without exception, block users from posting for ten days if their writing contains malicious details. Reinforce on-duty staff during the weekend and prioritize this management task.