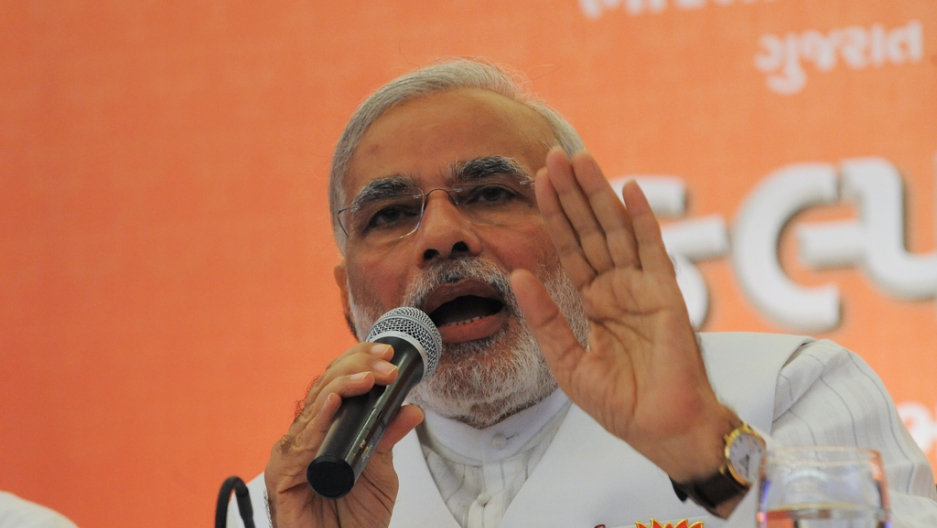 Controversial Gujarat Chief Minister Narendra Modi risks losing his shot at the prime minister's chair if he fails to increase his majority in his home state in ongoing elections, argue Mint's Sahil Makkar and Maulik Pathak.

And that could be a tough task. Not only is Modi fighting the usual fatigue of Indian voters -- he's up for a third term in a country where "anti-incumbency" is normally the largest factor at the polls. He's also facing a rebellion from rivals in the state Bharatiya Janata Party (BJP), Makkar and Pathak report.

Keshubhai Patel, who broke away from the BJP and founded the Gujarat Parivartan Party (GPP) three months ago, is running against him, diluting Modi's appeal with the numerous and powerful Leuva Patels, who make up a formidable voting bloc in Gujarat.  (You may know a few Patels yourself -- it's a surname associated with a caste of traders / businessmen, and accounts for quite a few US immigrants).

Modi -- who is credited with making Gujarat's most business-friendly state and driving rapid economic growth -- is a shoo in to win.  But that's not the issue.

“The question is not whether the BJP will win this election. This election is more about number of seats Modi can win for the party. Rather than the BJP, it is a litmus test for Modi as numbers will decide his prospects of becoming prime minister in the future,” Mint quotes R.K. Misra, a veteran journalist based in Ahmedabad, as saying.

If Modi fails to improve on his 2007 tally, when he won 117 out of the 182 assembly seats, he risks missing out on a chance to lead the BJP's national campaign as its candidate for prime minister in 2014.

Though the Supreme Court ruled recently that there wasn't enough evidence to pursue charges against him, Modi hasn't been able to escape blame for his government's tardy response to Hindu-Muslim riots that killed more than a thousand people in Ahmedabad in 2002.

According to Mint, in this election Dalits and Muslims alike are accusing the CM of discrimination.

“Modi has developed only those areas where his traditional voters are. In our villages, every facility is available for BJP voters, but we have been left out. No Dalit or Muslim would vote for him and (will) continue to stick with Congress,” the paper quoted Shaliesh Sagathiya, a resident of Kothiyara village in Rajkot, as saying.

For more inside baseball, read on here.