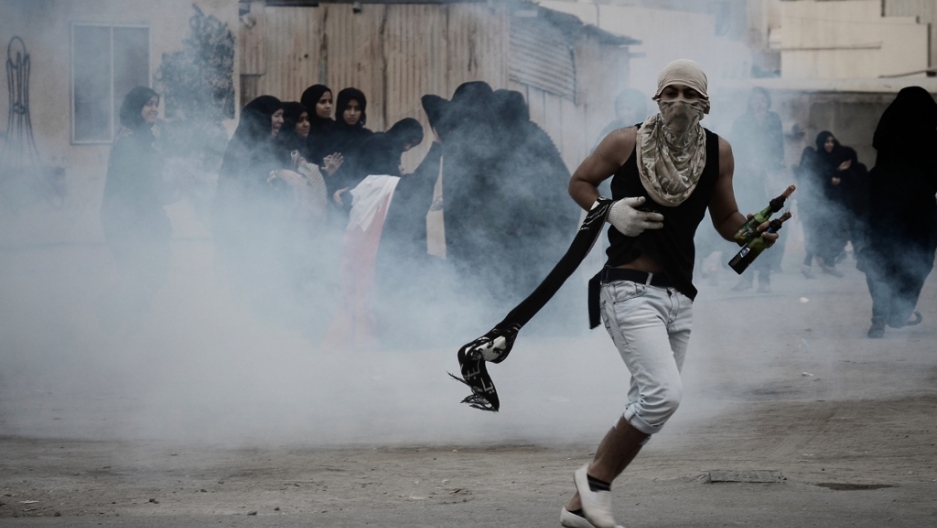 Following a series of brutal government crackdowns, young protesters who say they have little choice are taking a more militant approach, and in some cases, resorting to violence.

In late October, Bahrain’s conservative monarchy banned all demonstrations, but human rights activists estimate that at least 100 illegal protests have been held since then.

At 7 p.m. sharp on a recent night here in Muhazza, a small village just outside the capital, residents gathered for one such show of discontent. The scene appeared peaceful: old men in long, white robes stood calmly next to children wearing jeans, T-shirts and baseball caps. Women completely covered in black hijab sat nearby, shouting slogans against the all-powerful Bahraini monarch.

But for the traditional opposition, there was a troubling new contingent of young men, their faces covered in checkered headscarves. They circled the outskirts of the rally, disdainful of their elders entreaties to remain peaceful. This night they did not engage in violence. But in other villages, youth have hurled rocks and Molotov cocktails at police.

“They are a real force in the movement now,” said Ali Salman, leader of the Al Wefaq Islamic Society, the largest opposition group in Bahrain. “We tell them to remain nonviolent, but some don’t listen.”

In most countries, the low-key Muhazza protest would barely interest law enforcement. Here, in less than 10 minutes, police fired tear gas. The crowd fled into nearby stores and apartments. Children and seniors stayed indoors. But within a few minutes, everyone else poured back into the streets, shouting “Allah Akbar” (God is Great).

This night’s action repeats itself frequently in Muhazza. Villagers say they have been under siege for six weeks. Police set up checkpoints in Muhazza during the day, and conduct raids at night.

Many Bahrainis want a change in the country’s authoritarian government. This small island nation — next door to Saudi Arabia and home to the US Navy’s Fifth Fleet — has had the same unelected prime minister for 41 years. The parliament has little real power. The government arbitrarily arrests dissenters, deprives some of citizenship, and has tortured several to death, according to the Bahrain Independent Commission of Inquiry.

Inspired by the Arab Spring, traditional opposition parties have been peacefully gathering in the streets to call for reform for almost two years. But these days, the mood is changing. One young Muhazza protester named Ahmed, who gave only his first name, called for direct confrontation against the regime.

“King Hamad is a criminal,” he said. “He’s responsible for killing people. He and his family control the whole country and its wealth.”

Opposition leaders acknowledge that a growing number of youth are turning to more militant tactics. In one incident, the government says demonstrators killed a policeman.

In another, five bombs went off in Manama, the capital, killing two migrant workers. The government blamed the incidents on demonstrators, but Al Wefaq’s Salman questioned whether they were actually responsible for those deaths. He noted that the government has not allowed an independent investigation.

Even if there are isolated incidents, he said, the government exaggerates the violence to justify more repression. Salman said his organization continue to advocate non-violence.

“We are against the violence from the community or the police,” he said. He noted that a large majority of people “demand peaceful demonstrations.”

Analysts say the opposition movement is highly unlikely to turn to armed struggle as happened in Libya and Syria. Bahrain has strict gun control laws and smuggling arms to the island nation isn’t easy. However, the young militants do pose a political problem for the traditional leadership, according to Fred Wehrey, a senior associate in the Middle East Program at the Carnegie Endowment for International Peace.

“The youth-driven violence has already been used by the regime to tar and discredit the opposition as a whole,” he said in an email interview. “It is also putting pressure on Al Wefaq to be more maximalist in its demands with the regime.”

Salman admits that his group is feeling that pressure. Al Wefaq held its first open defiance of the demonstration ban with a Dec. 7 rally that attracted thousands. The demonstration was held away from downtown Manama so as not to unduly provoke the government. But it was still attacked by security forces.

Abdul-Aziz al Khalifa, a government spokesperson, argued that violent protests have become the norm, and that’s why authorities banned all demonstrations.

“Instead of letting things spiral out of control and have total anarchy on the street,” he said, the government implemented “a temporary suspension of these marches and protests.”

Opposition leaders point out that the “temporary” demonstration ban has no expiration date.

Al Khalifa noted that Bahrain has an important, strategic alliance with the United States. The headquarters of the US Navy’s Fifth Fleet is stationed here to protect oil shipping lanes and assert US presence in the region. The Fifth Fleet was used during the first Gulf War, the Iraq War and the Afghanistan War. It would also play a key role in any military attack on Iran. Given the base’s critical command and control functions, relocating elsewhere would be quite difficult, according to Wehrey.

Now, however, some opposition activists question the headquarters’ presence, accusing the United States of a double standard. While the administration of US President Barack Obama imposes strong economic sanctions on Syria’s dictatorship, they say, it only verbally criticizes Bahrain’s monarchy.

“Unfortunately the UK and US only think about a barrel of oil, not human rights,” said Ebrahim Karimi, an opposition leader who recently had his citizenship revoked by the government.

Karimi said activists are rethinking the traditional support for the US Navy because “the US government supports the Bahrain government, selling arms. That is something we can’t accept.”

In September last year, the Obama administration suspended delivery of a $53 million arms package to the military, objecting to Bahrain’s human rights violations. However, the administration resumed the arms sales in May 2012, claiming progress on the human rights front and that the arms would be used only for external defense.

Opposition leaders point out that the United States supplied Humvees to the military, and some were used to suppress demonstrations last year, along with tear gas.

Salman, the leader of the Al Wefaq opposition group, said the United States should back the opening of a UN Human Rights office in Manama. It could impose “banking sanctions against the government,” as they do against Syria. “They can do a lot more,” he said.

Back at the Muhazza rally, Ahmed said activists are now also questioning whether the US Fifth Fleet should pull out.

The younger militants are more critical of US policy, while the older, more moderate leaders tend to be supportive. The outcome of the Arab Spring uprising in Bahrain is by no means certain. But if the opposition comes to power, they will want to see a democratically elected parliament vote on the presence of the Fifth Fleet in their country.