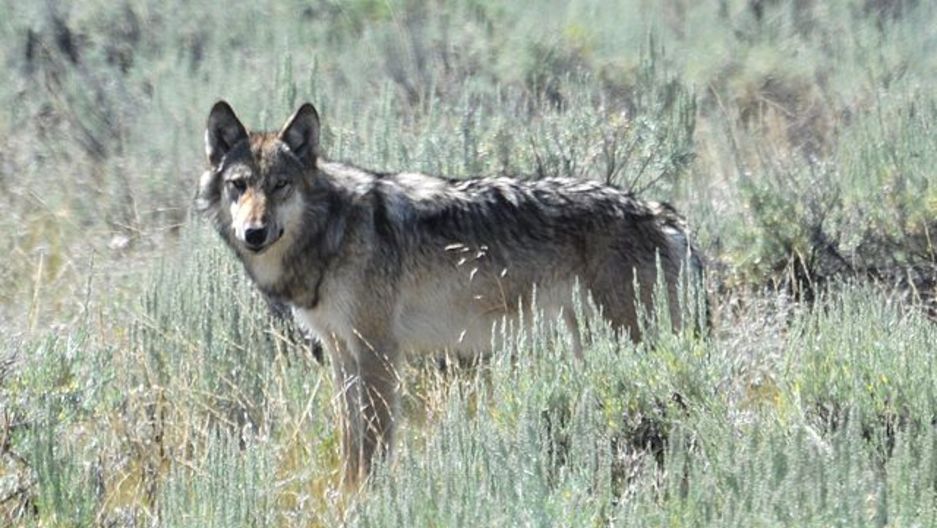 This wolf lives in the Lamar Valley in Yellowstone National Park. The pack 832F led is based in Lamar Valley. (Photo by Mike Cline via Wikimedia Commons.)

The beloved wolf known by her research number 832F or '06 Female from Yellowstone National Park, was shot and killed by hunters outside the park’s limits earlier this month.

She was the leader of a pack based in Yellowstone's northeastern Lamar Valley and among  the wolves collared with a $4,000 GPS tracker so researchers could study her movements.

Dan Stahler, a wildlife biologist for the National Park Service's Yellowstone Wolf Project, says her pack rarely left Yellowstone, but she was 15 miles outside of the park when a hunter had the opportunity to shoot her.

Nate Schweber, a New York Times reporter, says there’s been fierce debate over recent wolf hunts in the northern Rockies. Many ranchers and hunters see wolf hunts as a reasonable way to protect their livestock and big game populations.

“This year’s hunting season in the northern Rockies has been especially controversial because of the high numbers of popular wolves and wolves fitted with research collars that have been killed just outside Yellowstone in Idaho, Montana and Wyoming,” Schweber said.

This fall, the first wolf hunts were authorized in Wyoming in areas adjacent to Yellowstone. The death of 832F brings the total number of collared wolves shot outside of the park’s boundaries to eight.

Part of complexity of the issue, Stahler says, comes because researchers have different values on wildlife — depending on where the animal steps foot. Animals don’t recognize political boundaries or different jurisdictions, but it makes all the difference for hunters.

According to The New York Times, Montana’s Fish and Wildlife commissioners recently voted to halt wolf hunting and trapping in areas adjacent to Yellowstone National Park. What the state of Montana did, Stahler says, is recognize the sensitivity of the issues surrounding Yellowstone’s wildlife, as well as the unique relationship some communities have with their wildlife.

The reason 832F was an extraordinary wolf, Stahler says, is she was the alpha female, mother and breeder to many of the other pack members. Because of her position in the pack, she played a key role in hunting, territorial defense and raising offspring.

“She’s had three litters, the majority of all the pups, which have survived throughout their adult lives. And that's a key metric of success for individuals,” he said.

But what’s next for the pack, Stahler says, is hard to predict.

"Wolves are very socially resilient to these sorts of disruptions to their family groups,” Stahler says.

The alpha male is the only adult male left in the pack. And that's a predicament.

Stahler and the other researchers studying 832F’s pack in Yellowstone have learned wolves avoid inbreeding with close relatives. There is a chance, he says, this pack won’t reproduce next year and a possibility the pack will split up and form multiple new groups.

But the effects of these deaths on the pack are hard to anticipate.