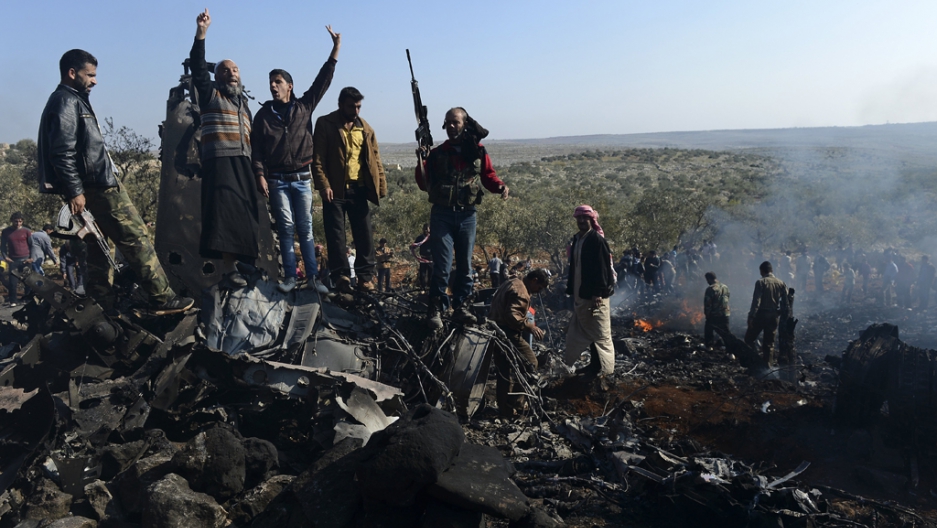 Syrian rebels celebrate on top of the remains of a Syrian government fighter jet which was shot down at Daret Ezza, on the border between the provinces of Idlib and Aleppo, on November 28, 2012. Syrian rebels captured a pilot manning the fighter jet downed over Daret Ezza in the northern province of Aleppo, witnesses told an AFP reporter in the town.
Credit: FRANCISCO LEONG
Share

A member of the Syrian Observatory for Human Rights told CNN today the US blacklisted the al-Nusra Front less out of security concerns -- the US labeled the group a proxy for Al Qaeda in Iraq -- more because they disagreed about Syria's future.

"The United States decided to single out the Nusra Front because of their recent rejection to the political opposition front and [because] they have a different approach to post-Assad's Syria," the Observatory's Rami Abdelrahman told CNN.

Foreign Policy's Aaron Zelin earlier said there is "not much open-source evidence" of the group's ties to Al Qaeda in Iraq, but "classified material may offer proof -- and there is certainly circumstantial evidence that Jabhat al-Nusra operates as a branch of the ISI," referring to the Islamic State of Iraq.

The Syrian Observatory for Human Rights said Jabhat al-Nusra ("The Support Group") fighters assisted with the rebel capture of a government military base near Aleppo, according to CNN.

The UK-based group has closely monitored both rebel and regime-led violence in Syria, where months of fighting between opposition forces and forces loyal to Syrian President Bashar al-Assad has taken tens of thousands of lives.

The US Treasury department today placed sanctions on al-Nusra leaders following the group's blacklisting as a terrorist organization by the State Department, reported The Wall Street Journal.

The sanctions come a day ahead of an international crisis meeting on Syria, set to be held in Morocco, said CNN.

Note: The original version of this piece incorrectly stated that Zelin was referring to Pakistan's Inter-Services Intelligence Unit with the acronym ISI. It has been changed to reflect the correction.