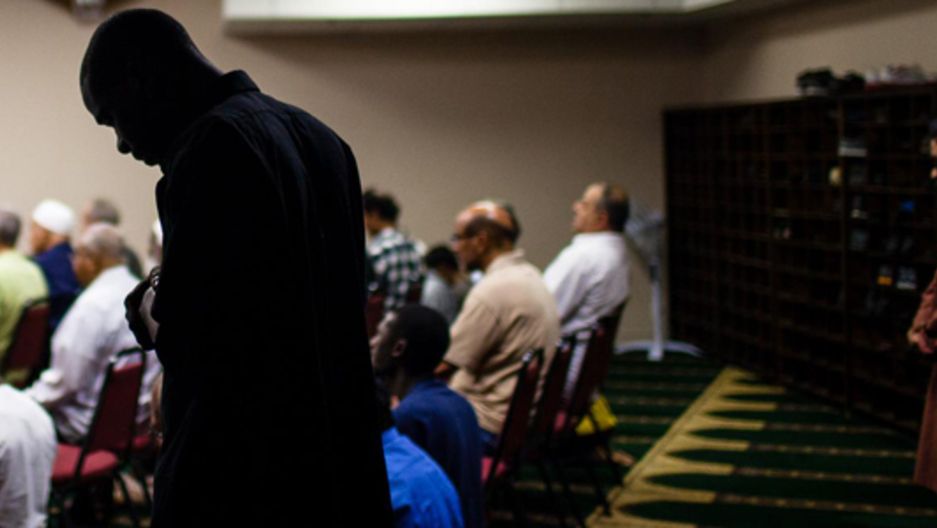 A Muslim man closes his eyes in prayer during Ramadan at the Islamic Center of Southern California, in Los Angeles. (Photo: Bear Guerra)

Share
Khalid Iqbal is a man in his early 60s; an immigrant from northern India who has practiced Islam for as long as he can remember. He has also always known that the Koran prohibits drinking alcohol—even as he tried his first beer, about four decades ago. "Maybe I was 22 or 23 when I was in college," says Iqbal, recalling how it all started. "After one or two years, I started drinking a couple of beers in the evening, or a couple of shots–not every day, but on and off." Iqbal and his family moved to Los Angeles in the '80s and he soon realized that alcohol was easy to get. By 1997, he could no longer function without alcohol. On a recent weeknight, Iqbal and his wife sit down to dinner. They eat on the floor over a plastic mat, following their custom, and drink water and coconut juice. His wife offers him a gentle smile as Iqbal talks candidly about how the pressures to succeed in America led him to depression and alcoholism. The only time he could stop drinking, was during the holy month of Ramadan. "I would quit for a month or 40 days or 50 days, but as soon as it'd be over again, I'd start," he says. "One time I quit for almost a year without any help. I had two DUIs … but last DUI, when they held me in a cell, I decided 'no, this is over.' I'd hit my bottom." He knew he had to do something. He ran a small grocery store — and it was now going bankrupt because of his drinking habit. So his college-age son, Shafi, encouraged him to head to Alcoholics Anonymous. "You know? I always thought of it as a human problem, so it didn't shock me," says Shafi, who knew of his dad's drinking even though the family did not talk about it. "I've always seen that in our community–in many religious communities–there's things that are said and done in public, and there's a different reality in private." But going public about drinking in Islam can be tantamount to denouncing one's faith. The Koran prohibits drinking alcohol, and making or selling it. Breaking those rules can bring shame, says Mona Amer, a psychology professor at the American University of Cairo. She focuses on mental health and substance abuse among Muslims. "Often times the concern amongst people who are using alcohol is not the religious prohibition per se, but more of the stigma within the community," she explains There is little public health research about substance abuse among Muslims. But findings so far point to a trend: most Muslims who do abuse alcohol, start around college-age, like Iqbal. In her workshops in the US, Amer has found parents in denial about their kids' drinking and worried their mosques will also judge them. Those worries are what led Yassir Fazaga to become a family therapist. An immigrant from Eritrea, Fazaga is also an imam at the Orange County Islamic Foundation, where he would hear from families worried about their alcoholic relatives. "That is when I felt I was very deficient, and I think that I also felt a bit dishonest, because it takes a lot within the community for people to come out and say: 'I have this problem'" says Fazaga. "Imams are very trusted in the community, so what do you do at that point?" Back then, he felt he couldn't do much besides listen and encourage abstinence, like most religious leaders would. Now, Fazaga suggests more, like rehab and therapy programs. And he makes sure that alcoholics know that their faith will help in their recovery. Khalid Iqbal has been sober for five years now. After some initial struggle Alcoholics Anonymous eventually worked for him. AA has roots in Christianity and the Bible, but Iqbal doesn't mind that, at all. "AA doesn't talk about religion–it started that way, but they say, you have to have some kind of faith," he explains. "That "supreme power" can come from anywhere. I'm a religious person from the beginning, so I have faith in God, so for me it was not hard to go back and practice on that." Iqbal's history of alcoholism has made him eager to help fellow Muslims in need. But it's not easy to get people to talk and seek therapy. For now, there's a newer 12-step program called "Millati Islami." It started in Baltimore in 1989 and is like AA, but rooted in the teachings of the Koran. But many mosques in the US are still somewhat resistant to it.